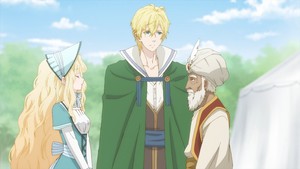 It’s not that Elianna Bernstein has nothing to say or is too shy to speak up – it’s more that she waits until it’s truly important. That theory becomes a reality this week in Bibliophile Princess‘ fifth episode, which not only sees her finally remembering her early encounters with Chris, but also finally gets her mad enough to open her mouth and let the words fly.

Both are important moments in the story, but I can’t help feeling like the latter is the bigger deal. Prior to this, we’ve seen Eli keep herself to herself, even hiding thoughts and feelings behind silence in her internal monologues. This could very easily, as I mentioned before, be the result of learning the hard way that sometimes it’s safer to keep quiet; anyone who’s ever been bullied can tell you that one. In Eli’s case, it’s possible that she learned the lesson from her well-meaning over-protective family as they sought to keep her safe from catty court ladies and the like, but no matter the reason, Elianna has mostly been staying silent unless she’s completely comfortable and certain of her words or if there’s something she can’t not say.

The situation she finds herself in this time is very much that last one. While it would be easy to write off her horror at Maudsley preparing to burn a pile of (stolen) books as her simply being aghast at the destruction of something she loves, it turns out that Elianna has a bigger reason then that. It’s not just wanton bonfires of knowledge she’s incensed about, it’s the greater cultural implications of them: societies that burn books, she tells Maudsley, are only one step away from burning people. That’s something that our own world history bears out – look no further than Nazi Germany for a solid example. (That Elianna’s family name is primarily a Jewish one makes the symbolism here even more poignant, along with the racism Maudsley manifests towards the Star of Sissel.) We can also look at the kerfuffle over works in the present day as indicative of the culture wars currently going on; it’s a less extreme example to be sure, but the genuine fear and rage over 2021’s most banned and challenged book, Maia Kobabe’s Gender Queer is concerning. When any book is kept out of people’s hands, either through banning or destruction, we should all do what Eli does and take notice.

And it’s not the physical act that’s got Eli engaged enough to speak out, it’s the symbolic gesture: that knowledge can be lost. Think about the specificity of her book-buying or even of different translation of the same manga volume you may have encountered (Sailor Moon is a good example) – you can get something different out of a specific edition of a work, and once a book is gone, it’s gone for good. And on a more personal note for Elianna, it was books that helped her to feel closer to her late mother and books that gave her that initial link to Christopher. Knowledge is inextricably linked to love for her, which is why the encounter with Maudsley helps to bring back her memories of when she first met Chris.

There’s also a nice symbolism there: Eli wasn’t able to remember Chris until he became as important to her as the books she read to feel closer to her mother. And now that she has linked them, she’s able to accept the feelings that she has for him. And really, how could she not love a guy who took her to a legendary traveling book fair and helped her buy up a carriage full of tomes?