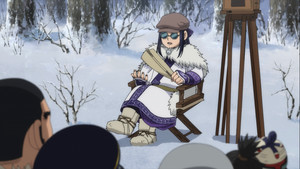 Golden Kamuy episode 5 takes us into new and interesting territory while managing to explore a number of relevant and resonant themes. There’s also a bunch of dick jokes.

A pretty standard week for Sugimoto and the gang.

The central development here is Sugimoto and Asirpa meeting a pair of filmmakers. After they throw off a sudden random encounter with a belligerent wolverine, the implications of moving pictures are brought into stark focus for the young Asirpa. There is a sudden, newfound potential to record Ainu rituals and culture through the use of this brand-new technology. The rest of the episode is caught up in film, movies, and legacy.

It’s a powerful sentiment that feels immediately and eternally relevant. Wrestling with the singular struggle of preserving and maintaining culture is one of the primary questions many people face. In the same way that we as individuals must stare death in the eye at some point in our time here, so too do ways of life. Asirpa knows what her people are facing in the years to come, and wonders if film can help capture their ways before they are potentially lost to time.

But almost immediately there are issues. The same technology that allows for the recording of ideas can randomly destroy it, as evidenced by the bulb that burns the film to cinders. The same technology that lets her see her mother’s face cannot retain the context of the path her father forced her on, as Sugimoto explains. In the end, technology is not the solution but merely a tool, and people are needed to carry on these ideas. It’s always up to us. As a musing on filmmaking and on the very manga this anime is based on, it’s a sober look at the power and limitations of media.

Also dick jokes and half-naked Tanigaki falling from the sky. What a show.