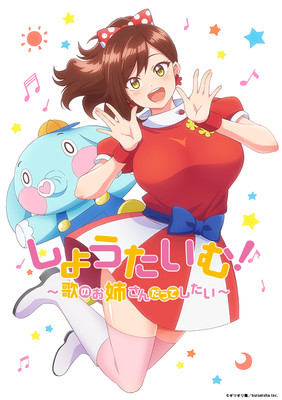 After the passing of Shoji’s wife, “The Sing Along! Show” became a crux of healing for him and his young daughter Kana. After a chance meeting with the show’s beautiful singing starlet, Minami, Shoji tries to start up a relationship—but is this single father ready to handle the realities of dating a TV personality? And can Minami ever find love working in an industry that requires her to keep up a pure and innocent appearance?

Unlike many of the previous AnimeFesta projects, the main cast is the same for both the “on-air version” and the more explicit “premium version” of the anime.

Saburou Miura (My Matchmaking Partner is a Student, An Aggressive Troublemaker) directed and wrote the scripts for the anime at Rabbit Gate. Kenichi Hamazaki designed the characters, and LAZZ was the chief animation director.

Suiseisha published the manga in print in September 2021. Girigiri also released the manga under the different title Uta no O-nee-san Datte H Shitai ~Konna Kao, TV no Mae no Minna niwa Miserarenai yo.