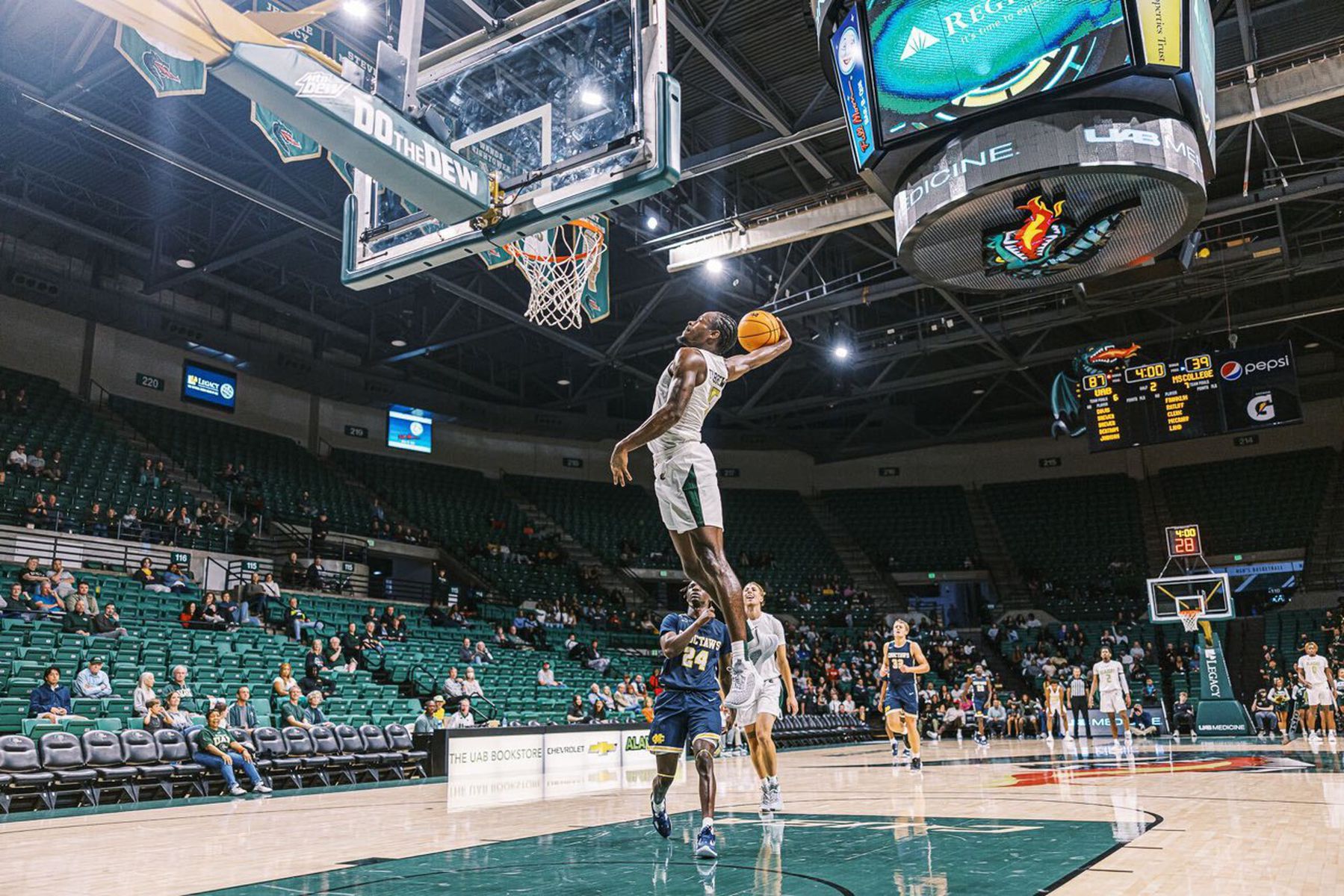 The season opener for the UAB basketball team is still a week away from tipping off but Jordan “Jelly” Walker and Trey “The Mayor” Jemison, along with a host of newcomers, made their intentions known in UAB’s preseason exhibition.

The Blazers emptied the bench and never trailed in a 98-47 victory over Mississippi College, Tuesday, Nov. 1, at Bartow Arena in Birmingham.

“It was what you expect,” UAB head coach Andy Kennedy said. “You come in and want to play rotation but you want to give guys a chance. Obviously, you know you’ve outmanned them and everybody got opportunities to play and it was great to get those walk-ons in. We had 12 turnovers in the first half., we were terribly careless with the ball. We only end up with 13 so we tightened that up in the second half.”

Along with going 5-of-10 from the floor, 2-for-6 on 3-point attempts, Brewer contributed 5 rebounds and 2 steals in a team-high 23 minutes and scored 10 of his 14 points in a four-minute span. Brewer’s brother, Ty, also an ETSU transfer, finished with 11 points, 7 rebounds, 4 steals and 3 blocks.

“Ledarrius early made a couple of shots, we knew he was a perimeter shooter and a veteran and was able to finish some shots at the rim,” Kennedy said. “Eric Gaines is a talent. Got to get him to tighten up because he’s often losing the ball. He can hit his shot when wants, he can block shots, and his hands are all over the place. He and Jelly together can be pretty exciting, but we’re a work in progress as most teams are at this stage. I like the pieces we’re working with.”

Walker got things started for UAB off the tip, stepping back from the right arc and draining a 3-pointer, and helped guide a 16-2 opening run. The reigning C-USA Player of the Year and Preseason Player of the Year played only 17 minutes and finished with 13 points and 3 assists for the game.

Shedding about 20 pounds during the offseason, Jemison accelerated up and down the floor with haste and provided an even more physical presence in the paint. The senior center did all his work in 18 minutes, recording a double-double with 11 points and 12 rebounds and adding 5 blocks and 2 steals.

“I lost some weight, I was about 280 at one point and got down to about 265-260,” Jemison said. “Being more mobile out there helps out with fouls and being a better defender. It’s helping me a whole lot in my game.”

The second half opened in a similar fashion as the first with UAB building a 60-18 lead on the heels of an 18-2 run in the first four minutes of play. Mississippi College trimmed the deficit to as low as 36 points midway through the half but could not keep up further, despite the Blazers emptying the entire bench and 14 of 15 players scoring in the game.

UAB ended the game with five players having made a 3-point basket, recording 5 rebounds, or scoring in double figures. The Blazers shot 50 percent overall and 16-of-23 on free-throw attempts and were plus-12 in rebounding and plus-20 in paint scoring. UAB also had 16 steals in forcing 21 total turnovers.

“Overall, pleased,” Kennedy said. “We’ll cut this tape up, learn and get ready to go for real.”

The Blazers officially open the season Monday, Nov. 7, against Alabama State at Bartow Arena. Tip-off is scheduled for 6:30 p.m. on CUSA.TV.