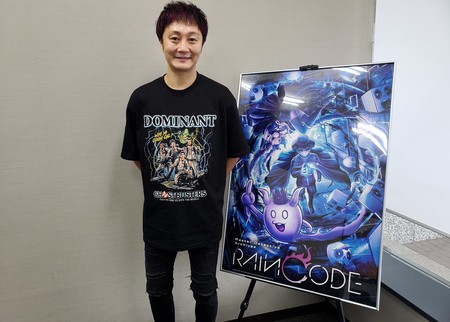 Master Detective Archives: RAIN CODE, the newest game from Danganronpa creator, Kazutaka Kodaka, is coming to the Nintendo Switch next year. We were able to sit down with him and talk about RAIN CODE and how he writes games—as well as his magnum opus Danganronpa.


What is Master Detective Archives: RAIN CODE about?

Kazutaka Kodaka: The main characters, Yuma and Shinigami, explore the city and solve mysteries in a 3D environment.


How would you describe the setting? What kind of world does the game take place in?

KODAKA: It’s set in a city where it never stops raining. The whole city is owned by this big company so whenever incidents happen, they are just swept under the rug. With the help of Shinigami, Yuma tries to solve mysteries inside a Mystery Labyrinth.


What is a “Mystery Labyrinth”?

KODAKA: As you go through a labyrinth, you step-by-step solve a murder mystery. It’s difficult to just describe it with words but we plan on releasing more gameplay footage in upcoming trailers.


Are there different Mystery Labyrinths in the game?

KODAKA: Yes, each case will have a completely different Mystery Labyrinth.


So is Yuma going into other people’s minds or is the Mystery Labyrinth within his own?


Was the idea of “Mystery Labyrinths” inspired by Sherlock Holmes?

KODAKA: Overall, the game itself is inspired by a mixture of Sherlock Holmes, the fantasy style of Tim Burton, and the Danganronpa series that I’m known for. 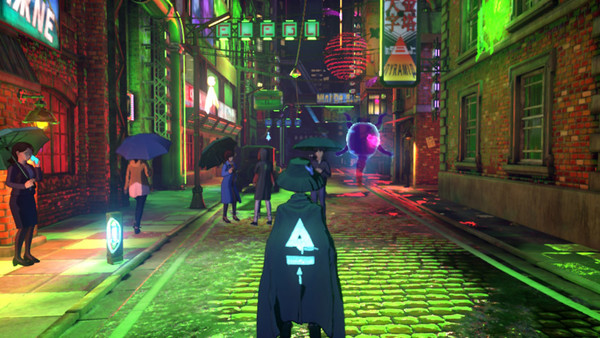 Why did you decide to have RAIN CODE set in a city where it’s always raining?

KODAKA: Since it’s a detective-themed video game, I thought it would be better cloudy than bright.
I also wanted some cyberpunk elements in the scenery as well. I thought it would be really cool to have the detectives in a city with rain and neon lights. And as you go through the game, you’ll see that the mystery of why it’s always raining is also a part of the plot. Oh, and there are a lot of drains in the city—that’s also a big part of it.


Is the world of RAIN CODE a cyberpunk world like in Akudama Drive or is it supposed to be more like our modern world?

KODAKA: Well, Akudama Drive was a straight mixture of cyberpunk and Japan. With RAIN CODE there is more of a fantasy and general Asian feel to it along with some cyberpunk elements. I mean, Akudama Drive took place in Japan so of course there was a big Japanese element to it. But as for RAIN CODE, it doesn’t take place in any specific country—so there are different kinds of influences in it.


I couldn’t help but notice this game seems to share some aspects with AI: THE SOMNIUM FILES – nirvanA Initiative which was made by fellow Tookyo Games writer/director Kōtarō Uchikoshi—namely solving murder mysteries by going into the dream worlds of various people. Is that a coincidence or something you planned out as a team?

KODAKA: [Laughs] It is a complete coincidence. We never even discussed our projects with each other.


The Danganronpa series is all about themes like hope versus despair and talent versus luck—what are the themes you will explore with RAIN CODE?


Anything more to add to that?

KODAKA:I think when you finish the game, you will clearly understand it was about love and hate.


Well, the concepts of love and hate are so complex—I mean for just “love” we have romantic love, familial love, friendship love… Are you planning to address all these kinds of love or just a specific aspect?

KODAKA: One thing that makes this game different from Danganronpa is the “Super Detective” aspect. In Danganronpa, you’re always worried about whether you can trust the other characters or not. But with RAIN CODE you can trust the people you partner up with—be that Shinigami or the other detectives. There’s that kind of friendship love. You might feel that it’s like a Shonen Jump manga in that way. You get together with your companions and fight the bad guys—though with a Danganronpa feel to it, of course.


Do you feel that people who enjoyed the Danganronpa games will enjoy RAIN CODE as well? Why?

KODAKA: Of course, they are different things. Danganronpa is Danganronpa and RAIN CODE is RAIN CODE, but I think that people who enjoy Danganronpa will really enjoy playing this game—and people who have never played the Danganronpa games will enjoy the experience as well.


What makes RAIN CODE different from the Danganronpa games?

KODAKA: I’d say the biggest difference is that it feels more… peaceful? Of course, the dark side of Danganronpa is still there but a wider audience will be able to enjoy this as opposed to Danganronpa.


Would you say it’s more lighthearted?

KODAKA: I’d say it’s like if Quentin Tarantino directed a Disney movie. [Laughs] But that’s something you’d want to see, isn’t it?


Can you explain the flow of the game?

KODAKA: As you go through the game you’ll get to explore the different districts of the city. There are side quests you can do like helping out the people who live in the city and solving other mysteries. When big incidents happen, you team up with other detectives in the city and try to crack the case. And like I mentioned earlier, there’s a big company that prefers to sweep these incidents under the rug, so with the help of Shinigami, you try to uncover what really happened. And when the mystery is solved in the Mystery Labyrinth, things change a bit in the real world.


So, the general loop is similar to that of Danganronpa? Like, you have free time, the incident, the investigation, the Mystery Labyrinth/the trial, and finally the resolution.


On the visual side of things, while the Rui Komatsuzaki character designs remain from the Danganronpa series, the overall style of the presentation in RAIN CODE is quite different. You’ve gone from a mixture of 2D and 3D to full 3D. Why is that?

KODAKA: Danganronpa was an adventure game made in the 2010s. I want RAIN CODE to feel like one made in the 2020s. In order for me to do that, I wanted to do the whole game in 3D so a wider, modern audience could enjoy it. With 3D models, the characters are more expressive. And thanks to the Spike Chunsoft development team for this project—who have worked on several Shonen Jump games and specialize in this kind of 3D modeling—we were able to make the characters 3D. 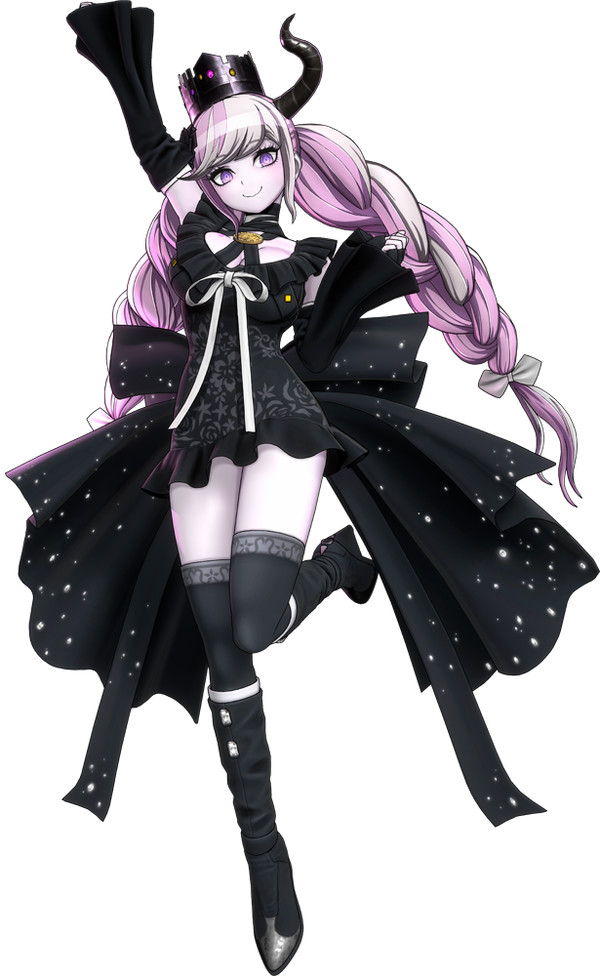 About the characters in the game, who is your favorite and why?

KODAKA: Shinigami. I’ve been seeing a lot of positive comments about the character after the new trailer dropped.


I just have to ask, was the design of Shinigami inspired by the Bowsette (Koopa-Hime) meme?
[His staff show him the meme.]

KODAKA: I’ve never heard of this before! Nintendo didn’t say anything either. And since it’s not an official thing, well… [Laughs]


I noticed in the TGS 2022 trailer that one of the girls looks suspiciously like Danganronpa 2’s Chiaki Nanami and has an Usami hair clip—was that your idea or Rui Komatsuzaki‘s?

KODAKA: It was all Komatsuzaki. But I don’t think there is any greater meaning to it. It just seems to fit that particular character.


The protagonist, Yuma, has amnesia. Why did you decide to go with that plot device?

KODAKA: Actually, I almost always use amnesia as a plot device. The biggest reason I do this is because I want the player to be able to put themselves in the protagonist’s shoes. This is easier to do when the protagonist doesn’t have a lot of memories of their own. This way, players learn about the location and situation they are in since the main character is interested in learning those things as well.


When you write a game, what is your writing process?

KODAKA: The first thing I decide on is the setting—where it takes place and what kind of place it is. Then I think about the characters—the Super Detectives in RAIN CODE’s case. After that I broadly think about the incidents—the murders that happen—followed by the game’s big climax—which I think is the most important aspect. Then, to make sure that the big climax makes sense, I go back and make adjustments throughout the rest of the story.


Is that how you wrote not only RAIN CODE but Danganronpa and Akudama Drive as well?

KODAKA: Yes, it is. Actually, one other thing I do while writing is imagine what the game’s trailer will look like—how it will show off the game. Because that will be most players’ introduction to the game.


So that’s always lurking in the back of your head as you’re writing?

KODAKA: Yes, but I only think about things like this when I am at my desk working—which may be why I’m there so much [laughs]. I try not to focus on it too much but it does help me see the game objectively.


What do you think makes a good villain?

KODAKA: I like the idea of a “natural born villain”—someone who has no reason to be evil but just is. Kind of like The Dark Knight version of the Joker. Why they became bad—why they became the way they are… they give reasons but they change every time. That’s what I think of as a genuine villain.


Is it because it is “natural” that it’s intimidating—that anyone could be a natural born villain?

KODAKA: It’s more that it’s not something anyone can become, it’s that they just are. When I write my villains, I am very particular about how I go about it because of just how much they impact the story.


A lot of your villains create more villains. Why is that?

KODAKA: There’s just something that draws me to villains. I wonder why that is? I was born and raised in a peaceful household. But in a fictional setting, the villains just shine.


Speaking of villain stories, what are your thoughts on doing an anime adaptation of Danganronpa Zero if given the chance?

KODAKA: Due to how the novel’s story works, I think it could work as an anime movie but not as a series—I think that would be a bit too difficult.


I noticed that some of the characters from Danganronpa Zero appear in the background of the Danganronpa 3: The End of Hope’s Peak High School: Despair Arc anime. Why did you decide to do this?

KODAKA: I wanted to add them in as a kind of Easter Egg for core fans of the franchise—but more than that, I wanted to show everyone that everything [the novels, the anime, and the games] was all connected.


To show that they were all “canon”?


About Dangonronpa V3, more than a few fans disliked the ending—and what it meant about the rest of the franchise. Some fans flat out rejected it—deciding that the villain’s words could not be trusted. What are your thoughts on this?

KODAKA: If you play the ending and then the prologue again, I think you’ll see it in a new light. I wanted to leave it up to the player to decide what is a lie and what isn’t.


So why did you choose such a divisive twist?