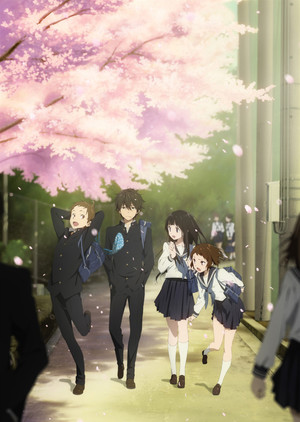 The “Kamiyama High School’s Little Concert” event will have a daytime and evening session. The music performances will be matched with notable scenes from the anime. Satou and Sakaguchi will appear exclusively during the “Afterword of the Classics Club’s Ennui” corner.

Tickets cost 9,900 yen (about US$67), or 13,500 yen (about US$92) for a ticket which comes with premium merchandise. e-plus is selling the tickets in Japan. Visitors are required to present one of the following: proof of three-time vaccination, a negative PCR result from within three days, or proof of an antigen test.

HYOUKA debuted in Japan on April 22, 2012. To commemorate its 10th anniversary, the series unveiled a new logo.

Funimation announced in 2017 that it had licensed the Hyou-ka television anime series. Crunchyroll added the series in March following the Crunchyroll–Funimation merger. Live-Action ‘And Yet, You Are So Sweet’ Film Casts Yumena Yanai – News Anime