The staff of the Aikatsu! 10th Story ~Mirai e no Starway~ (Starway to the Future, an apparent reference to the Japanese translation of the Led Zeppelin song “Stairway to Heaven”) anime film announced on Wednesday that the film will open in Japan on January 20, 2023. The staff also unveiled a new visual and ending theme song artists for the film. 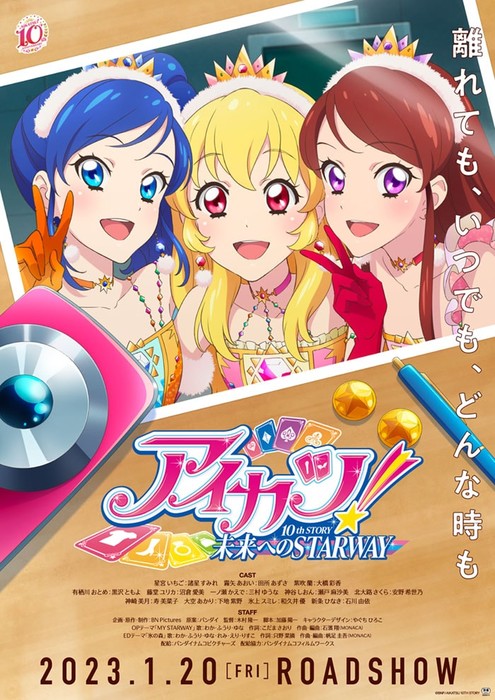 The staff also debuted the below clip for the film on Wednesday, but the clip is region-restricted to Japan only.

Aikatsu! 10th Story ~Mirai e no Starway~ is the franchise‘s 10th anniversary film. A similarly titled film accompanied the opening of the Gekijō-ban Aikatsu Planet! film on July 15 this year, and this new film follows on from that film, and similarly celebrates the 10th anniversary of the franchise. As with the previous film, the new film will be set in the story of the 2012 to 2016 Aikatsu! anime, and will center once again on protagonist Ichigo Hoshinomiya.

The Aikatsu! franchise began with the original arcade card game in October 2012. The game inspired a television anime that ran from 2012 to 2016, and three anime films. The second entry in the franchise, Aikatsu Stars!, inspired a television anime that premiered on TV Tokyo and its affiliates in April 2016. Aikatsu Stars! received an anime film in August 2016.

The Aikatsu on Parade! television anime premiered in October 2019 with the new lead character Raki Kiseki and characters from the previous Aikatsu! anime series.