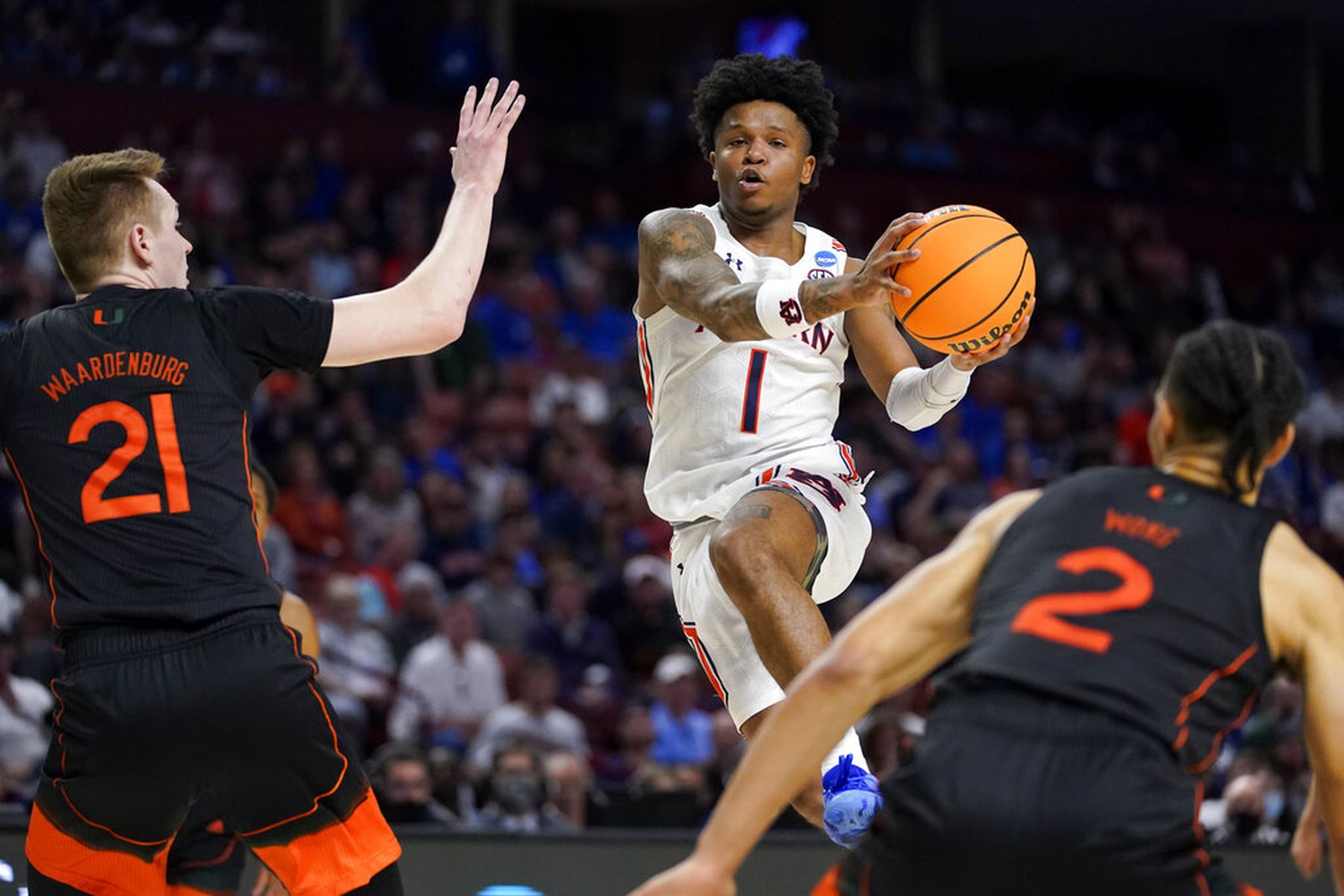 The confetti sprinkled across the floor of Neville Arena is long gone.

Nearly eight months have passed since Auburn last played a game on its home floor; March 5 was when the Tigers clinched the regular-season SEC title against South Carolina, a regular-season finale-turned-coronation for Bruce Pearl’s team. That iteration of the Tigers fell short of its ultimate goal, bounced in the second round of the NCAA Tournament two weeks later, but hope spring anew with the start of another season on the horizon.

A slimmer K.D. Johnson hopes to be more explosive for Auburn this season

Auburn’s season opener is still five days away—Monday night against George Mason—but Pearl’s squad is prepared for a dress rehearsal Wednesday night against in-state Division II program UAH. The Tigers and Charges will tip at 7 p.m. in Neville Arena, though the game will not be broadcast or streamed anywhere.

“I spent a long time in Division II, so I know how good the basketball is,” Pearl said. “I know what a big opportunity this is for Alabama-Huntsville. I’ve known Coach (John) Schulman for a long time, going back to his days at Chattanooga. He’s a really good man; he’s a really good coach. They’ve got a terrific program and he’s done a great job following Lennie Acuff; that’s a tough act to follow, and he’s done it there in Huntsville.”

Auburn and UAH have never met on the hardwood, and the Tigers are 7-1 in exhibition games during Pearl’s tenure. The lone loss during that time was to Berry before the start of the 2018-19 season, when Auburn went on to make a Final Four run. While Auburn has typically enjoyed success in these preseason tune-ups, they’re by no means a barometer of success for the season ahead.

Still, the matchup with UAH — ranked 24th in the preseason NABC Division II poll — is an opportunity to get out in front of the home crowd for the first time and a chance to measure up against another opponent (the Tigers have been going up against themselves for weeks, with the lone reprieve a private scrimmage against UAB a couple weeks ago) before the regular season gets underway next week.

“It’ll be good,” Pearl said. “It won’t be much like a lot of teams that we play, so from that standpoint that’s not going to be great, but they’ll be competitive. They’ll bring everybody back from a year ago and if we don’t play them smart, they could hang around for a while.”

Here are a few things to look out for Wednesday night at Neville Arena:

A new lineup, a new rotation

Of course Auburn’s starting lineup is going to look different this season after the Tigers lost their All-America frontcourt of Jabari Smith and Walker Kessler, both of whom were selected in the first round of June’s NBA Draft. It’s a retooled roster for Pearl entering Year 9, with several key returners and four newcomers.

As the 15th-ranked Tigers head into the season, only one starting spot appears to be locked in — Wendell Green Jr. moving into the starting point guard role after spending last season as Auburn’s sixth man. That leaves four spots up for grabs, with Pearl still toying with the possibilities at his disposal thanks to a roster that has comfortable depth at all five positions.

“Still in the stages of kind of evaluating,” Pearl said. “We’ll certainly play to win, but I will definitely be playing a lot of people and may even mess around with the starting lineup.”

Pearl expects to use a rotation of 10-12 players against the Chargers, and that could even extend to 13-deep Wednesday night at Neville Arena. The only player who shouldn’t be available to take the court is highly touted freshman Chance Westry, a versatile guard/wing who underwent an arthroscopic knee procedure last month and is still “a few weeks away” from returning to the court.

Like he did during the team’s summer tour in Israel, Pearl plans to experiment some with rotations and even the starting lineup against UAH. It should be interesting to gauge how he utilizes the likes of returners K.D. Johnson, Zep Jasper, Allen Flanigan, Chris Moore, Dylan Cardwell and Jaylin Williams, along with Green, as well as newcomers Johni Broome, Yohan Traore and Tre Donaldson. The latter three, of course, will be making their Neville Arena debuts.

“I have a starting five in mind for this exhibition, for sure,” Pearl said. “I have one in mind, and I know what it’s going to be. And I think this is not necessarily the same five for the opener on Monday.”

A neck-and-neck battle on the wing

Auburn’s depth across the roster means the Tigers have quality options at each position, but perhaps the most intriguing one entering the season is at small forward, where Allen Flanigan and Chris Moore have been jostling for time.

Flanigan is the returning starter at that spot, but he missed two weeks during the preseason due to personal matters before returning to the fold three weeks ago. Since his return, the senior has looked the best he has in his career, according to Pearl. That’s high praise, especially for a player coming off a difficult 2021-22 campaign. Remember, Flanigan partially tore his Achilles tendon in the preseason last year and missed several months post-surgery. Upon his return, he struggled to regain the form from his breakout sophomore season, shooting just 39.5 percent from the field and a lackluster 20.5 percent from beyond the arc.

Two years ago, Flanigan averaged 14.3 points, 5.5 rebounds and 2.9 assists per game as a sophomore. The hope is he can regain that form as a senior after a full year to recover from his Achilles injury. The early signs have been promising; Pearl noted how consistent Flanigan has been in practice in recent weeks, making plays on both ends of the floor and providing high energy and positive body language.

While Flanigan is expected to bounce back this season, his absence earlier in the preseason afforded more of an opportunity for Moore at the three. The 6-foot-6, 230-pound junior has taken advantage of that, and it could bear out into more playing time — and potentially a starting role early on — after he was limited to just 7.4 minutes per game last season while working mostly at the four.

Moore has grown more comfortable at the three this preseason, reshaping his body to better fit that role in the process. At SEC media day a couple weeks ago, Pearl described the competition between Flanigan and Moore on the wing as “neck and neck.”

“It’s competition, but it’s also brotherly love with that, too,” Moore said. “He’s been helping me out, with me stepping into his shoes. He’s been there in recent years, just helping me with the mindset and the plays and everything. Just keeping me on track. That’s how it’s really been with us.”

UAH is going to fire away

Few teams in Division II attempted as many 3-pointers as UAH last season. The Chargers took the fifth-most shots from beyond the arc at that level, attempting 925 on the season and connecting on 316 of them (34.2 percent).

Pearl expects more of the same from UAH at Neville Arena.

“They’re gonna shoot it,” Pearl said. “They’re going to be dangerous in transition…. Long shots, long rebounds. They’re better from three than they are from two.”

While UAH was just 149th among DII teams in 3-point percentage last season, the Chargers return the likes of Luke Burnett, who shot 36.7 percent from deep on 102 attempts as a freshman last season. That was the seventh-best clip among freshmen across Division II last year. UAH also returns its top-two scorers from last year in CJ Williamson (17 points per game) and Chaney Johnson (16.8 points per game). Johnson shot 46.4 percent from beyond the arc on 69 attempts.

Pearl anticipates his team packing the paint defensively and trying to cut off anything on the inside, forcing UAH to knock down its shots from outside — and making sure his own team can corral the longer rebounds off those missed perimeter shots.

“What we do doesn’t work without effort and energy; the system’s just not built that way,” Pearl said. “Obviously just understanding the scouting report, it’s a great preparation because it’s a definitive scouting report. What they do is what they do, and they do it really well. Can we — we have ways to guard it — but will we? Will we have the discipline to do things we need to do? So from that standpoint it’ll be great exercise.” What time is ‘After Happily Ever After’ with Bow Wow tonight? Live stream, TV info, how to watch online Latest News