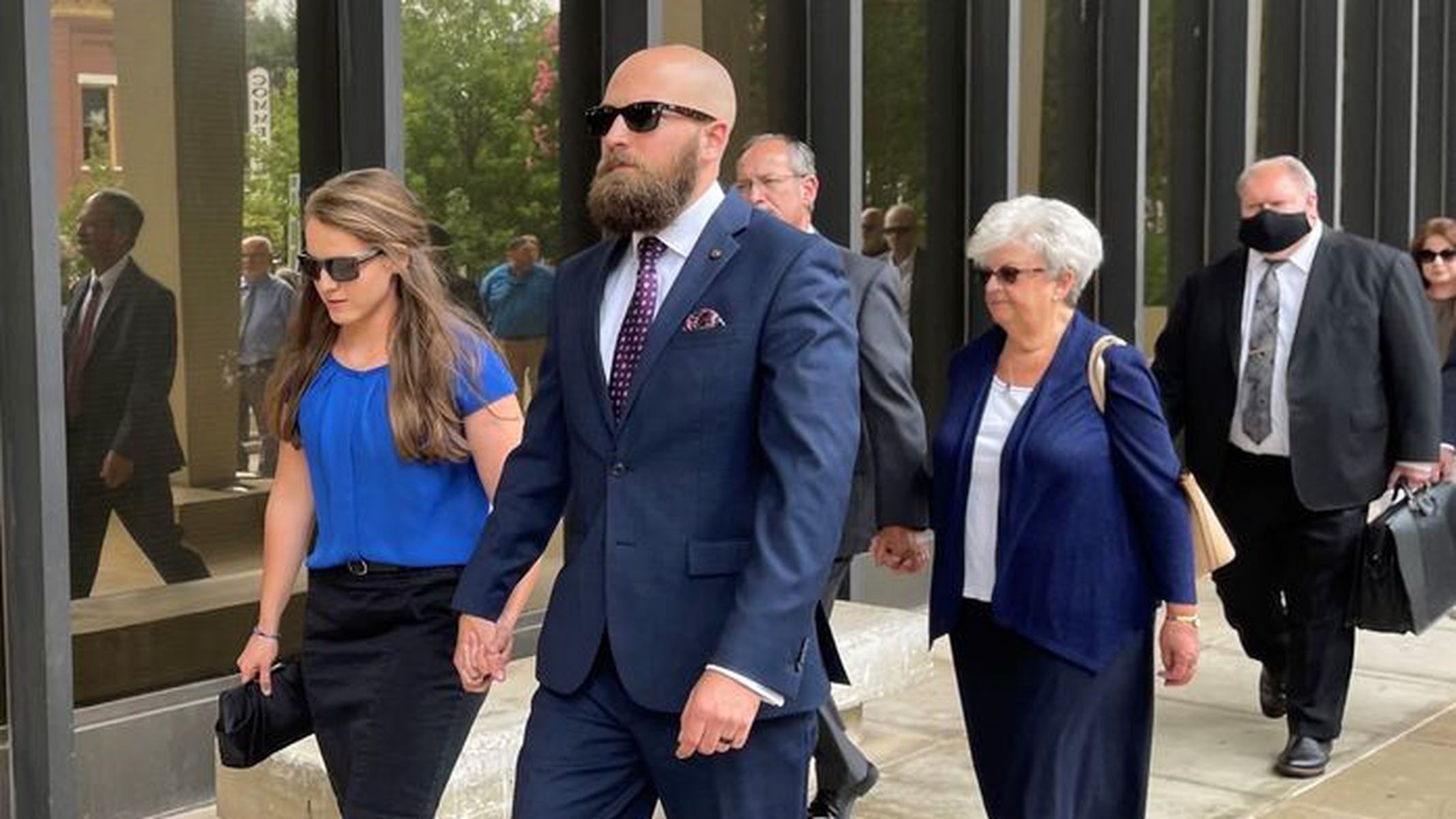 The city of Huntsville continues to defend an officer serving time for murder, arguing in federal court that he did not violate a man’s civil rights when he shot and killed him four years ago.

“Officer Darby faced a tense and uncertain situation,” lawyers for the city wrote today in a federal court filing. “with mere seconds to react, when he confronted an armed, defiant, mentally-distressed subject with a raised gun capable of firing upon and killing Officer Darby and his colleagues, all of whom lacked protective cover.”

The city’s lawyers are asking U.S. District Judge Liles C. Burke to rule on a lawsuit filed by the family of Jeff Parker, the man Darby shot and killed on April 3, 2018. Lawyers for both sides today filed motions for summary judgment, asking the judge to decide the outcome of the lawsuit before it reaches a jury.

Darby, who goes by Ben, shot and killed Parker in his home after the man phoned police, threatening to shoot himself. Darby is serving a 25-year prison sentence after a state court jury found him guilty of murder last year.

Attorneys for Parker’s family point to that murder conviction as evidence of wrongdoing by Darby and the city, asking the judge to decide the lawsuit in their favor.

“Murder is a clearly established constitutional violation, always has been, always will be,” the family attorneys wrote in federal court records today. “Bottom line — if you get convicted of murder, you do not get qualified immunity.”

“Here, even though they saw the body cam footage that showed Darby’s wrongful conduct – and even after Darby was convicted — the City’s corporate representative, mayor, police chief, incident review board, and investigations and training commander all have admitted — time and time again over the past four-and-a-half years — that Darby acted within the City’s policies on the use of deadly force and that Darby followed the City’s training on the use of deadly force.”

On the day Darby shot and killed him, Parker called 911 and said that he was armed and suicidal. Police went to Parker’s home in west Huntsville and found him sitting on a couch with a gun to his head. The first officer to arrive testified against Darby at the murder trial, telling the jury that she tried to de-escalate and keep Parker from taking his own life.

Darby, the third officer on the scene, testified that he had to take over the situation from the senior officer because he believed she was putting herself in danger by talking to Parker. He told the jury that he shot Parker in defense of himself and two other officers because he feared the man might shoot them with what later turned out to be a flare gun.

Body camera video shows Darby grab a shotgun from his patrol car, sprint to the house and shout for Parker to drop his gun. Darby fired the fatal shot 11 seconds after entering the house, the video shows.

About a month after the shooting, the Huntsville police department’s internal review board — a panel of three captains — decided that Darby did not violate city policy when he shot and killed Parker. In fact, Darby returned to work, and the city sent the other two officers for remedial training.

In their filing today, the city’s lawyers argue that Darby did not violate Parker’s constitutional rights and therefore there’s nothing for which the city can be held liable.

The city’s lawyers argue that the Parker family lawyers can’t point to what the city did after the shooting to prove that they condoned constitutional violations or caused Darby to use excessive force.

The Parker family lawyers pointed out that city officials defended Darby from the beginning, paying for his criminal legal bills with public money, repeatedly telling the public he did not do anything wrong, even publicly disputing the jury’s guilty verdict of murder.

Darby remained on the city payroll until he resigned more than two months after the jury found him guilty.

[Read more: Huntsville won’t reveal how much it spent on lawyers in Darby case, claims records are ‘privileged’]

If Judge Burks declines to throw out the claims against the city, taxpayers could wind up paying for the shooting. The judge already denied a previous motion to dismiss the city from the suit, writing last month that the lawsuit “plausibly establishes that the City had a policy that caused Officer Darby’s unconstitutional conduct.”

The Parker family lawyers said in their filing that the case is “unique” because cities typically distance themselves from officers who are convicted of crimes.

“However, we have a different dynamic in this case,” the lawyers wrote. “Here, immediately following Parker’s death, after his indictment, and after his conviction, and in depositions in this case, the City’s leadership has rallied around Darby, insisting both before and after the criminal trial that what he did — i.e. shooting a suicidal man for not dropping a gun — followed City policy and training. Based on these admissions, there is no question that the City had an unconstitutional policy.”