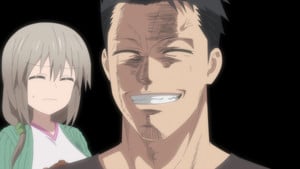 There’s something very cathartic about Uzaki getting roasted by her own family right after we just had her get a stern talking to from her friends from work. She is just getting called out on her bullshit every week, and it’s getting harder and harder to deny the fact that she might be more obvious with her feelings toward Sakurai than she might think. Introducing the over-the-top doting father character definitely happened at a good time as his obnoxious abrasiveness that his whole family calls him out on is kind of exactly what Uzaki needs. While everybody else is trying to be a bit more passive, this guy is much more direct about how uncomfortable he feels about his college age daughter potentially dating someone. The fact that he was also introduced as somebody that Sakurai can bond with at the gym is also interesting because it makes you wonder how everyone is going to react when the shoe finally drops. It seems like Uzaki’s dad’s biggest concern is whether or not Sakurai is an upstanding and straightforward guy. So if he finds out that he’s that type of person before he realizes that these two have a thing for each other, I wonder if that’ll make the transition into them being a couple easier. I’m sure it’ll be a funny revelation regardless.

Sakurai focusing on working out in order to clear his head after everything that’s been happening the past couple of episodes is a good way of giving him his own thing to do and it’s probably the first time the series has actively given him something to fiddle with without involving Uzaki. I think that’s a good approach because not only do we get more moments of him actually reflecting on situations that leave him flustered, but it also helps lead to situations where Uzaki can’t exactly feel like the smartest person in the room when he’s not around as often. I would definitely like more moments like this as the show goes on because I would like that pride of hers to break down a little bit more, especially since she is realizing that if she keeps her usual antics up, then she could very well lose him as a potential friend/partner. Given how much focus this has been given, I am fairly confident that we will see more romantic developments as the rest of the season carries on and I can only hope that such a conclusion is reached in a satisfactory way.

Uzaki-chan Wants to Hang Out! Season 2 is currently streaming on
Crunchyroll.