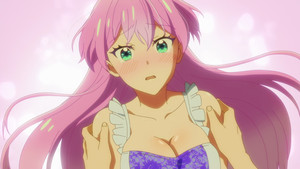 Even though this show has an incredibly stupid premise and a checklist of common romantic comedy clichés, I still find myself being drawn in to the character interactions since the show does go out of its way to make it clear where every character is coming from. However, this episode might actually be the weakest of the series so far because most of it felt rather lazy in how it executed those clichés. The first two thirds of this episode were all centered around two main ideas. The first one is the idea that Shiori and Minami might be growing their own affection for each other as it appears that the two might not want to switch partners even if they get the opportunity. Unfortunately the show doesn’t really do anything with that idea besides introduce it so I’m going to chalk that more up to set up and hope that the reason isn’t just a simple matter of they don’t see the need to switch partners. I’m sure that Shiori wants to switch partners but she might still be in that mindset that Jiro probably doesn’t, so what’s the point? However, this in turn makes that exchange between the two very frustrating towards the middle of the episode because it’s the classic “we’re about to have a serious conversation/revelation only for the comedic side character to ruin the mood at the last minute!” I’m convinced the only reason why I’m not more angry about that is because Sadaharu as a character is absolutely hilarious. Hands-down my favorite parts of the episode were where he was using Yu Gi Oh! as visual humor to describe his place in everything.

The second thing that the first two thirds of this episode focuses on was the classic misunderstanding situation. However, unlike last week’s episode which dealt with the whole misunderstood perception of character extremely well, this was as basic as you can get. Sadaharu ends up seeing Akari and Minami alone and assumes that they kissed which he communicates to Jiro. I do like that the reason these two were paired together had a point to it as Akari almost seemed reassured by the fact that she still had feelings for Minami despite her clear growing affection for Jiro. It was also interesting to see how Jiro reacted to the whole situation and how he clearly was bothered by the fact that Akari was seemingly acting out on her physical desire to be with Minami.

I like the way that the episode ends with Jiro finally being told directly that he’s with somebody that has just as much experience as he does when it comes to romance and being physically intimate with people. It’s also nice to see him deflate in retrospect when he realizes that he stole someone else’s first kiss because at the time, he thought Akari had more experience than him. You could argue that it was also her fault because she was very much antagonizing him during that moment but it’s nice that there are arguably no more misunderstandings here. Could most of the episodes have been handled better and less lazily to get us to this point? Absolutely and if the writer couldn’t think of any other way to get us here, then I wish that the misunderstanding was shortened significantly but at least there were still some positives in this episode to focus on and I can only hope that this is just a momentary lapse in writing rather than being indicative of a noticeable dipping quality going forward.

More Than a Married Couple, But Not Lovers is currently streaming on
Crunchyroll.