How would you rate episode 4 of
BLUELOCK ? 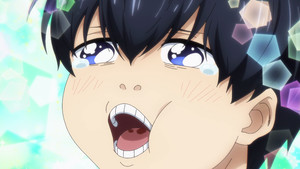 You know, for a series that practically screamed to its audience that it’s going to be different from other sports anime by focusing primarily on individual egoists battling it out for a chance at the top, I was surprised at how drawn out and almost friendship focused this episode was. Last week was a little bit difficult to judge since it felt very much like the series was laying the groundwork or the introduction for one of its main thematic ideas. Given the general pace of most other sports anime, I guess I was sort of expecting that question to be answered in this episode so I was surprised that a lot of it was still set up. Don’t get me wrong, there are a lot of things that happened in this episode but there is no definitive endpoint and I’m a little shocked that the series is taking its time to flesh all of this out. On the one hand, that could speak to how confident the writing is regarding how the pay off will be worth it. Or at worst it could be the animation staff stretching out the material in order to not blaze through too much of the manga from jump.

Team Z needs to not lose their next match or everyone is disqualified, so to compromise on highlighting everyone’s individual attributes while also focusing as a team, everyone is going to rotate their positions in an attempt to back up whoever is taking point after every 10 minutes. Some of these specialty skills make sense like the ability to strike the ball with your left foot or having a good dribble ability, but others just feel kind of lazy and uninspired like a “never give up attitude“. I’m not sure if there’s a joke in there or if the writer just didn’t want to come up with individual skills for all of the players. We know that our main character is going to be the linchpin for all of this as he focuses on discovering what his special skill is and I’m gonna take a wild guess that it has something to do with his ability to instinctively make split second decisions. I like the fact that he seems to be the only person actively paying attention to the other team. It’s ironic that again, the series started by pushing this mentality of solidarity and yet I wonder if the main skill of our protagonist is that he’s the one paying the most attention to everyone’s individual skills which would not only make him an ideal striker but also a very good teammate. I wonder if that’s the balance that they’re going for but I guess we’ll just have to wait another week or two to see what this payoff finally is.

BLUELOCK is currently streaming on
Crunchyroll.