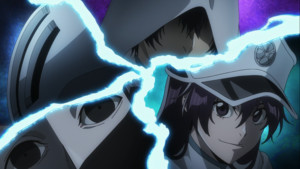 There are few things Bleach loves more than introducing new villains via a squash match. If you’re somebody who hasn’t absorbed too much pro-wrestling terminology and doesn’t know what that means, you’ve still almost certainly seen it happen in at least a few shonen battle series. The narrative needs to introduce a new bad guy and quickly get across that they’re intimidating, so it arranges for them to fight a character we’re already familiar with, and totally wipe the floor with them. Think Shunsui’s “fight” with Chad during the Soul Society arc for a great example, using a single chapter to not only establish not only an individual power gap, but set the bench mark for every Captain-level character to come.

While it’s a device I think this series tends to overuse, it can certainly be effective for telling the audience that these new enemies are not to be trifled with. The Quincy may serve their King, but absolutely none of those invading soul society are disposable, and they won’t be taken down by mere seated officers like some of the Espada’s underlings. Every one of them is just as powerful as the Gotei 13’s best. This episode certainly succeeds in establishing that idea – I fully believe the Quincy are going to be powerful enemies that only the strongest of Soul Society’s fighters will stand a chance against. Unfortunately there’s a number of problems of execution that make for a very shaky journey getting there.

Firstly, this is a pretty conservative episode in terms of animation. There’s a couple nice cuts, but there’s a lot more shots of characters standing still, bridging the gap between combatants through split screens or jarring cuts between what feel like slavish recreations of manga panels. It’s not bad so much as it’s just functional, where previously this season was oozing with style and panache to make every shot feel like the coolest thing you’ve ever seen. I can’t complain too much considering what I had to deal with last season but it means an episode that is 90% fighting and character introductions doesn’t quite have the impact to carry itself on that alone.

The bigger narrative issue is that the Quincy mostly come out looking powerful because our heroes make a lot of dumb decisions in quick succession. I’m not somebody who demands characters in stories constantly make the most optimal or rational choices. Characters making mistakes can be a fundamental part of their arc, or the narrative’s larger themes, or just a relatable moment of fallibility that drives the story into interesting new directions. But there are also times where characters make poor decisions for the sole reason that if they didn’t, the story couldn’t go the way the creators want to, and four of the Gotei 13’s strongest captains all making the same move of sacrificing their Bankai definitely feels like one of those.

Like, come on guys, none of you thought to coordinate or communicate this plan to anyone else, on the (not-so-)off chance that somebody else might have the same idea, and you don’t want 30% of your side’s offensive power kneecapped? Add in Urahara, the ever forward thinking genius, not bothering to double-tap Opie, and all the villains’ wins this episode feel like capitalizing on our heroes’ fumbles more than anything. Now that could be a setup of sorts, establishing the Soul Reapers have gotten complacent with their established powers, or have grown stagnant since Aizen’s defeat, or are just poorly organized under leadership that’s just not prepared for a full-on war. But as it’s presented here, it just feels like we needed to nerf the likes of Byakuya and Hitsugaya so they wouldn’t immediately curbstomp their opponents.

That’s a shame, because the threat of stealing Bankai is, on paper, a super interesting wrinkle to throw into all this. It puts a massive handicap on the show’s strongest characters, leaving them to either figure out a new way to fight, or be dominated by their opponents. It also takes away one of Bleach‘s longest running narrative crutches, preventing our heroes from pulling out their second form to turn the tide of battle whenever it’s most dramatic. With the establishment of the Quincy having to swap between offense and defense, that seems like a natural setup for group battles, forcing characters to team up and combine powers in ways they haven’t before to catch their opponent in a moment of weakness. It even leaves room for desperation moves or feints by the Soul Reapers who haven’t lost their Bankai. This is, legitimately, a really good setup for potentially interesting new fights rather than the 1-on-1 bouts that have defined and distended previous arcs, and it sucks that the introduction feels so contrived.

But I don’t want to leave this review being entirely down on this episode, so let’s take a moment to appreciate the amazing names of the villains who arrive this week. After all, a good heel is nothing without a good moniker, and the three new ones are pretty solid. Thank you to the show for including official romanized names, because otherwise I wouldn’t know to capitalize each individual “Na” in NaNaNa Najahkoop. NaNaNa doesn’t actually do much this episode but snark at Rojuro, but I dare you to say his name without spontaneously smiling. Same for Bambietta Basterbine, a lady born to put the plosive in explosive. The bronze medal goes to Äs Nödt simply because I hate having to break out the keyboard shortcuts for his umlauts, but they’re all winners here, really. Any one of them could be a character in Gundam without even slightly bending disbelief, and that’s the sign of a good, ridiculous name.

Whether or not those characters can live up to their names, or the dominant introduction they’ve been allotted, will be the x factor for the foreseeable future of this arc. We’ve got the setup now for a whole lot of fights across a myriad of characters, which is where Bleach has buttered its bread for decades, so here’s hoping these matches can deliver. Are you ready Navigators? The Alchemy Stars Halloween Event is about to launch. – Advertorial Anime