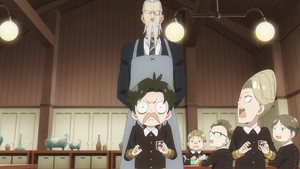 It was the analysis of the art piece that did it for me this week. SPY x FAMILY nearly always has at least one moment of spot-on humor, but the reason why Damian won first place in the impromptu art contest was just so right that it deserves special recognition. Not only is a spectacular piece of adult reasoning applied to a first grader’s work, it’s also a pitch-perfect example of how we’re taught to analyze art and literature: looking for the things we want to see in a piece rather than what’s actually there. While I absolutely believe that kids see and comprehend a lot more than we tend to give them credit for, I also would have my doubts that Damian specifically created a battered griffon standing over the mangled corpse of its child even if I didn’t know the real story. (And if that’s the conclusion I came to, I’d be headed to report a severely disturbed child.)

But even more than that, it’s a wonderful example of how Anya really does make Damian’s days a little bit brighter, not that he’d ever admit it. He may have acted grumpy about her attempts to help him, but we all know he’s got a soft spot for (read: raging crush on) the pink-haired little psychic, and that she offered to help him in the first place was a good example of why. As we know from his internal monologues, there are very few people who actually see Damian as a person – they see Donovan Desmond’s second son, a wealthy kid largely assumed to have a bright future. But for all Anya calls him Second Son, she’s also got a firmer grasp of the fact that his bluster hides an actual person. Sure, she mostly recognizes him as an important feature of her plans to ensure world peace and the continued existence of the Forger family, but she treats him like another kid her own age, and that’s not something Damian gets to experience very often. Even Ewan and Emile, the Sojiro and Akira to his Domiyoji, treat him like someone better than them, acquiescing to his every wish. Only Anya has the chutzpah to stand up to him.

That’s part of what makes this series work as a whole – everyone’s got a darker part of their lives, and acknowledging that allows them to feel like fuller characters than in your average comedy show. Damian’s decision not to go home from the dorms during the break and his desperate craving for his father’s approval and love are both deeply sad things, because this is a six-year-old we’re talking about. (It also makes me wonder if there are more similarities between the names Eden College and Eton College than their mere names, especially in the historical sense of packing one’s child off to boarding school.) Sure, Henderson may have an aneurysm from a lack of elegance, but both Anya’s help and that prize mean a lot to Damian, much in the same way that Loid scheduled a meeting with Sylvia just so that he could brag about Anya’s progress in the meaningless details of childhood. Is it a waste of valuable spy resources and Sylvia’s time? Not in Loid’s mind!

This new pattern of having episodes cover one longer story and one or two extras from the manga is working surprisingly well. I could wish that the terrifying tale of Yor feeding Yuri was the main way her cooking skills had been addressed, because a child who’s not good at cooking is much less tired of a trope, but the detail that Yuri can now brush off being run over by a truck because of eating her weird blue cake is a good one. We’re definitely biding our time a bit until the next major story arc hits, but with the continued focus on the way that the characters’ pasts inform their presents and Anya’s Anyaness and Becky being six going on twenty-five, this is still a pretty great time and a bright spot in the week.

Spy×Family is currently streaming on
Crunchyroll.