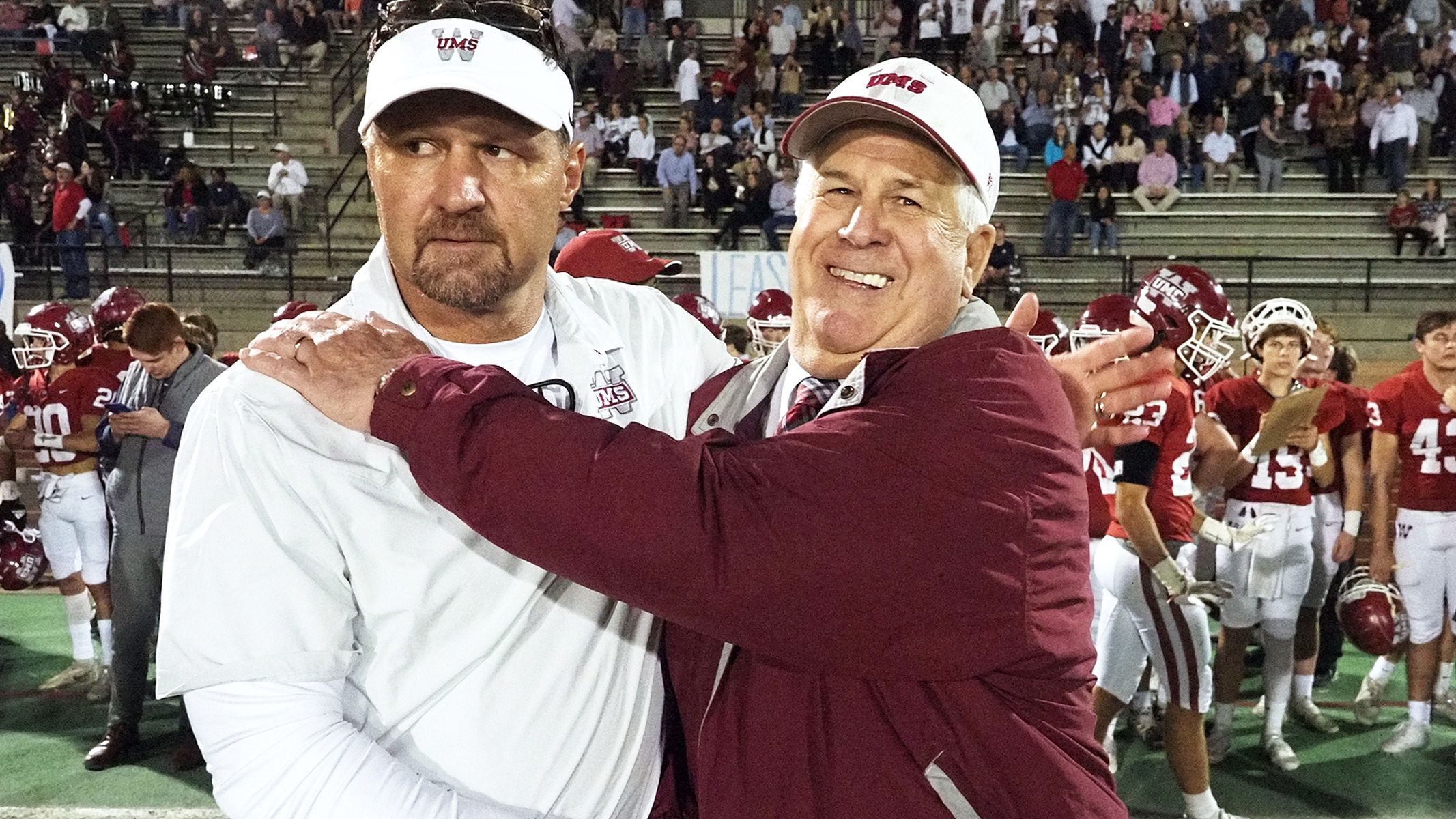 In terms of style points, this one might not rank among the top 345 of Terry Curtis’ coaching wins. But with the game on the line, the Bulldogs did what they almost always do, which was make enough plays to win.

Three blocked punts and a late Hayden Nagy interception was the difference as the No. 1 Bulldogs completed a perfect 10-0 season with a 17-8 win over Williamson.

The victory was No. 346 for Curtis, tying him with former Vestavia Hill’s coach Buddy Anderson as the winningest coach in AHSAA high school football history.

“I’m not sure we played great, but Williamson had a lot to do with that,” Curtis said. “Special teams were big for us tonight the way we figured they would be. Breaking the record is very gratifying and humbling because of everyone it took over the years to make it happen.”

UMS-Wright dominated the battle of field position in the first half but couldn’t get control of the game against a stingy Williamson defense. The Bulldogs finally got on the board early in the second quarter when Denton Elliott recorded the first of his two blocked punts to set up the offense on the Williamson 10. But three Cole Blaylock runs netted only two yards, leading to a 24-yard field goal by John Ramsay.

Williamson’s next possession resulted in a three-and-out, with Elliott again blocking the punt.

“The coaches chose me a couple of weeks ago to be the guy to go for the punt block,” Elliott said. “They (Williamson) switched things up later in the game, which gave Joe (Lott) a chance to come in and block one.”

It appeared the Bulldogs’ halftime lead would be 3-0. But UMS forced a short punt then used two plays to move 34 yards and score a touchdown on the last play of the half. The score came on a 26-yard pass from Sutton Snypes to Lott in the back corner of the end zone. Lott made a spectacular catch while dragging one foot inbounds.

The five UMS-Wight possessions in the first half had an average starting field position of the Williamson 37 yard-line.

But Williamson got back in the game early in the third quarter. First, Keyante Pettaway recovered a fumble on the UMS 27. After a pass interference penalty, quarterback Jeremy Williams hit Aaron Jackson for a 18-yard touchdown, then found his star receiver Jeremiah Owens for the 2-point conversion.

Williamson recovered an onside and appeared to have all the momentum. But UMS-Wright quickly forced a turnover on downs.

The score remained 10-8 until midway through the fourth quarter when Lott blocked a punt to set up the UMS offense at the Williamson 28. Four plays later, Blaylock scored off right tackle from 9 yards out to increase the lead to 17-8.

Williamson still had life, driving to the UMS-Wright 26. But, with 3:02 remaining, Nagy stepped in front of a pass on the left sideline and managed to keep one foot inbound for the interception that ended the final threat.

“We were in Cover 2, and I was just reading the receiver,” Nagy said. “It was great to be able to be there to make a play. It’s something special to be a part of this team.”

They said it: “Williamson really came to play and I’m not sure we did. But we made the plays we had to make.” — UMS-Wright coach Terry Curtis

“It was a hard-fought game, but special teams killed us. When our guys come to play, we can compete with any team in the state.” — Williamson coach Antonio Coleman

“I have all the respect in the world for Coach Curtis. He’s also an Auburn guy, so I love him to death. He just made history. He’s won more than 300 games and I’m just trying to win my seventh.” — Coleman

Stars of the Game: The UMS-Wright special teams were the difference in the game, led by Ramsey being perfect on a field goal and two extra points, plus the blocked punts by Elliott and Lott.

Star spotlight: Blaylock, the South Alabama commitment, was the focus of the Williamson defense all night. He finished with 99 yards on 24 carries and one touchdown. Only five of his 24 carries went for more than five yards.

What’s next? UMS-Wright will take its 10-0 record and No. 1 state rankings into the Class 5A playoffs where the Bulldogs will host Headland Friday night. Williamson (6-4) will be the No. 4 see from Region 1 and will travel to Troy to face Charles Henderson.