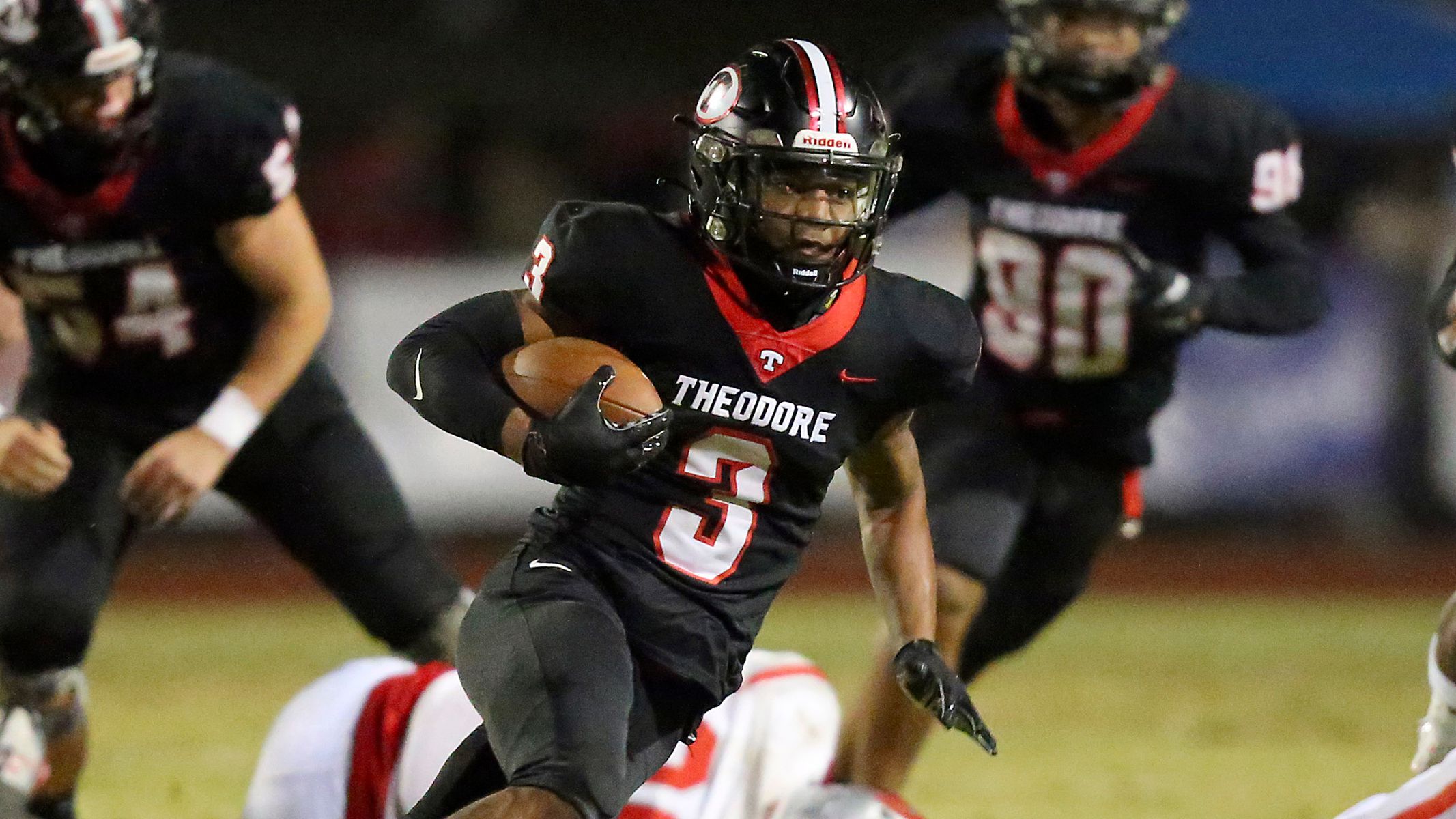 Theodore showed why the Bobcats are now the No. 1-ranked team in Class 6A.

Coming off an emotional victory over Saraland to capture the Region 1 title, the Bobcats turned to a dominating defense – including two defensive scores – and a rugged running game to earn a 16-3 home victory over St. Paul’s on Friday night at C.A. Douglas Field.

“It was a huge battle last week and to the carry the momentum into this week to another region game, we came out a little flat,” Theodore running back Brayden Jenkins said.

The victory capped a perfect 10-0 regular season for Theodore, the school’s first unblemished regular season since 2000. The Bobcats have now won 10 games for three straight seasons.

Jenkins rushed for 165 yards and a touchdown, but the Bobcats led just 6-0 at halftime. The Bobcats’ opening drive of the game went 80 yards on 17 plays but ended on a fourth-down incompletion at the 10.

Theodore’s Will James delivered three plays later, stepping in front and intercepting Braxton Byrd and returning in 16 yards for the only score of the first half.

“Will brings so much energy to our team and it shows. He is so upbeat” Bobcats coach Eric Collier said.

The Bobcats’ opening possession of the second half came up short on a fourth-and-goal fumble at the 1 yard line, but Theodore’s Derrick Lee then tackled Drew Williamson in the end zone for a safety to give the Bobcats an 8-0 lead.

The Saints lone score came on a 49-yard field goal in the fourth quarter.

“We knew coming in that we were going to be in a battle all night. That’s a good football team and they can play,” Collier said.

Star of the game: Jenkins ran 30 times for 165 yards, surpassing the 100-yard mark in the first half. His longest run went for 33 yards and 10 of his carries went for a first down.

Play of the game: Jenkins 4-yard touchdown run was the only offensive score of the game, capping an eight-play drive, which included seven carries by Jenkins. That gave the Bobcats a 16-3 lead with 3:17 to go. “Their defense stayed with us all night, back and forth,” Jenkins said.

Stat sheet: Byrd passed for 47 yards for the Saints and Drew Williamson rushed for 22 yards. … Cameron Rigby passed for 40 yards for Theodore all in the first half, the Bobcats didn’t attempt a pass in the second half.

By the numbers: 13, regular-season wins streak for Theodore. … 6, playoff teams Theodore defeated this season. … 13, consecutive seasons the Saints have qualified for the playoffs.

Coachspeak: “Coming off Saraland, it was a big emotional roller coaster, and to get our guys to realize we played a good football team tonight, not to overlook any opponent; the scoreboard didn’t turn out like we wanted, but we saw some bright spots and some things we can build on for the playoffs next week.” – Collier

They said it: “I saw the quarterback turn his elbow, looking for his No. 2 receiver and immediately made a break on the ball.” – James, describing his pick-6

“To be able to stay in the game with the No. 1 team for four quarters shows we earned a lot of respect tonight.” – Byrd