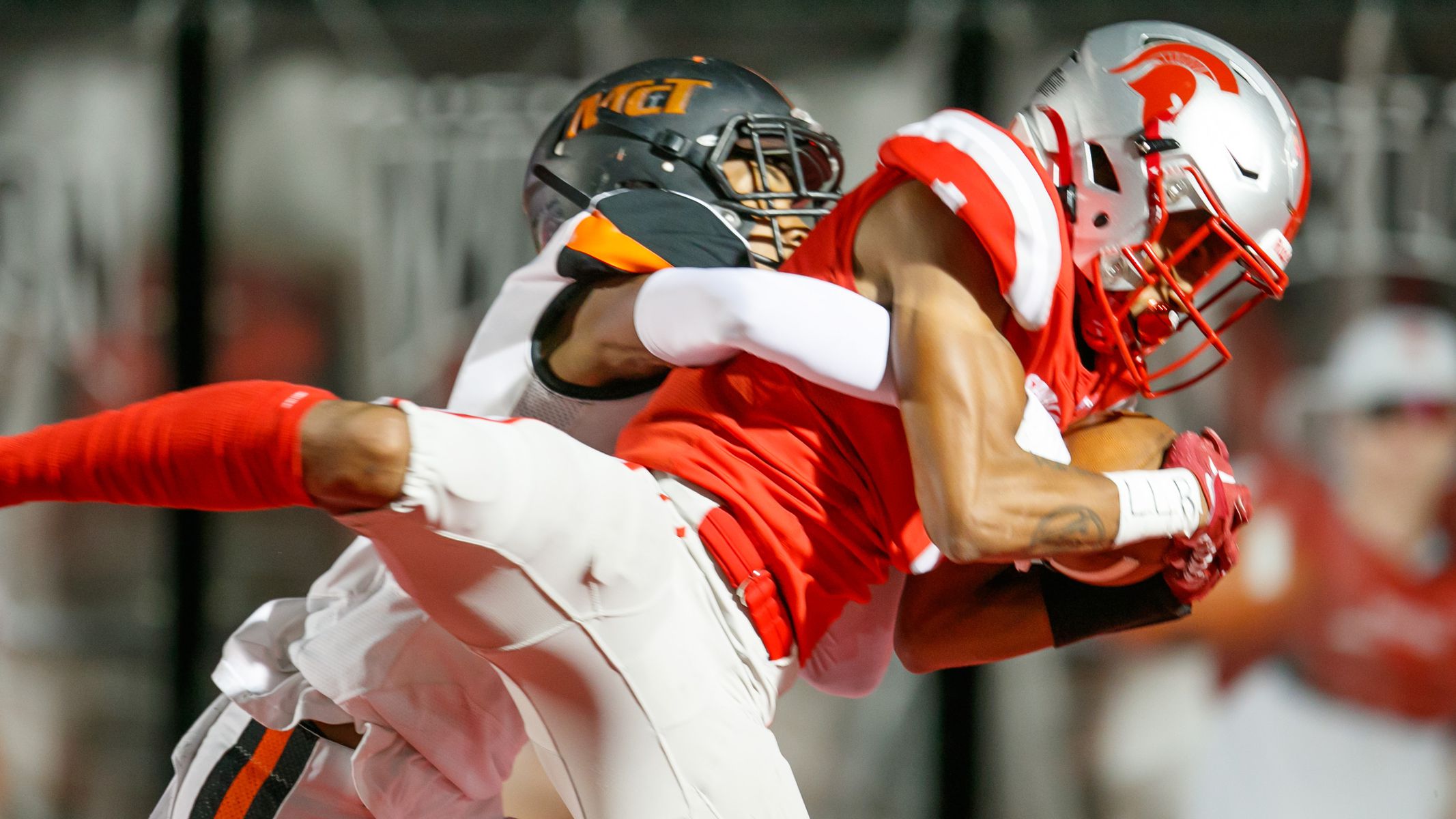 Faith Academy led 54-0 at the half in cruising to the win.

The Rams (8-2) will play at Eufaula in the first round of the playoffs next week. LeFlore finished 0-10 and has now lost 23 straight games dating back to 2020.

Jarrett Daughtry was 7-of-8 for 159 yards and 2 TDs. Ty Goodwill caught both touchdown passes and forced a fumble that led to another score.

Dorian Smith ran a punt back 67 yards for a TD. Christian Burnette touched the ball twice, running for 29 yards and 2 TDs.

Alabama Christian QB Hayes Hunt threw for five touchdown passes, three of them to TE Preston Hicks, and ran for another to lead the Eagles to a 43-18 non-region road win over Bayside Academy.

They took the first lead of the game on the Hunt 14-yard touchdown run less than three minutes into the game, ending a 12-play, 79-yard drive. Bayside Academy responded on its first possession as Damien Tate scored on 2nd-and-goal from the 3 to tie the game at 7-7.

After the Eagles went three-and-out, Bayside got the ball back and took a 10-7 lead on Joey Jones’ 39-yard field goal. Four plays later, Alabama Christian regained the lead when Hunt found Otasowie Dean for a 24-yard reception to make it 14-10.

On the next two Alabama Christian drives of the second quarter, Hunt found Preston Hicks for TD receptions of 13 and 23 yards. Dean completed the two-point try on the final one to make it 29-10.

Alabama Christian scored on its only two full possessions of the second half – and five straight in the game overall. Hunt’s third straight touchdown pass to Hicks, a 14-yard catch on 3rd-and-6 at the 14, made it 36-10 with 4:43 left in the third quarter. The Admirals responded with a 5-yard Sammy Dunn rushing touchdown and Damien Tate two-point conversion attempt to get to 36-18.

To start the fourth quarter, Hunt connected for his final touchdown pass of the night, 9 yards to Avery Stuart, to make it 43-18.

Hunt finished 8-for-12 for 117 passing yards and five touchdown passes. He had 7 carries for 59 yards. TE Preston Hicks had 5 receptions for 74 yards and RB Corey Landers finished with 16 carries for 131 yards, including 10 for 101 in the second half.

Both teams travel in the first round of the playoffs. Alabama Christian (7-3) plays at Randolph County, while Bayside (6-4) heads to No. 1 Montgomery Catholic.

Woods Ray threw five touchdown passes, completing 14-of-18 throws for 262 yards to lead the Patriots to the road win. Ray finished the regular season with 2,003 yards through the air with 20 touchdowns and four interceptions for 8-2 Homewood.

Homewood ran 27 times for 70 yards, but the Vikings’ defense held the visitors to just 19 yards on the ground in the second half. Ray was 11-for-14 through the air in the first half.

Jasper (5-5) got a pair of second-half touchdowns on the ground from freshman Micah Pledger. Quarterback Spencer Rosenfeld was 10-for-16 for 110 yards for the Vikes.

Homewood hosts McAdory next week to open the Class 6A playoffs while 5A Jasper travels to Moody.

In a meeting between Class 4A playoff teams, West Morgan earned a 55-38 victory over Haleyville in Friday’s regular-season finale.

“I feel like the offense had our ups and downs,” Fletcher said.

For Haleyville (6-4), Matthew Coleman finished with 191 yards and three touchdowns passing for Haleyville. He also rushed for 52 yards and had 152 punt return yards. Will Bartes added 91 rushing yards and a touchdown.

Brett Coleman totaled seven catches for 97 yards and a TD, while James Sutherland and Cooper McNutt contributed touchdown receptions. Blake Hood had a 10-yard interception return for a score.

“We started good but we didn’t finish like we’re supposed to, ” Townsend said. “We’re way better than that.”

The Rebels had allowed only 68 points in its first nine games, including four shutouts, and Haleyville’s offense scored more than half that total Friday.

Key stat: West Morgan has scored at least 34 points in every win this season and more than 50 in its last three games.

Coachspeak: “Our defense stayed on the field quite a bit,” West Morgan coach Drew Phillips said. “Haleyville has really good football team. I’m pleased to come out with a win for sure.”

Did you know?: West Morgan has won four straight games.

What’s next?: West Morgan hosts Region 8 third-seeded Westminster Christian next week in the first round of the playoffs. Haleyville plays Oneonta at home.

“Every team from now on is a really a good team in the playoffs,” Phillips said.

The Pirates rallied from a 20-7 halftime deficit to edge Lee-Huntsville in the regular season finale at Alabama A&M’s Lewis Crews Stadium in Normal.

Boaz improved to 4-6 with its third straight win. The Pirates will travel to Russellville Friday in the first round of the Class 5A state playoffs. Lee concluded its season 3-7.

Tyler Pierce passed for 282 yards and 2 touchdowns and led Boaz in rushing with 79 yards on 11 carries.

The home team – which scored all its points in the first quarter – went 66 yards on the opening possession of the night, scoring on a 32-yard pass from LeShaun Vann to Brandon Taylor.

Lee’s second score came on a 17-yard run by Vann, capping a 55-yard march. Marcus James made the point-after kick with 3:25 left in the opening period.

Boaz answered with a 4-play, 51-yard drive. Tristan Childers scored with 2:13 left in the first quarter on a 1-yard run. Pierce had a 36-yard run and a 30-yard pass to Bo Brock on the scoring drive.

Lee scored what proved to be its final points in just 4 plays. Vann ran 10 yards for the touchdown with 53 seconds left in the quarter.

Boaz cut the lead to 20-14 with 2:31 left in the third quarter on a 45-yard touchdown pass from Piece to Ty Sullivan.

The winning touchdown came on a 44-yard pass from Pierce to Presley Fant with 5:57 left in the game. Jose Arreguin kicked his third extra point for what proved to be the winning margin.

Senior Gavin Smart had 8 receptions for Boaz to give him 102 for his career, moving him past Taylor Smith to make him the school’s all-time leader.

Jaeden Tolliver-Williams scooped up a fumble with 5:26 left in the game and ran 15 yards for what proved to be the winning touchdown for Grissom in a wild fourth quarter that included another fumble recovery for a score for the Tigers.

The Tigers (3-7) led 13-10 at the half after a 37-yard touchdown pass from Tore Foss to Cole Porter and a 16-yard pass from Seth Leeburn to Tariq Thaxton.

Buckhorn got a 28-yard field goal from Van Reid and a 70-yard interception return for a score by Cohen Fielder with 1:15 left in the half.

After a scoreless third quarter, Buckhorn’s Shamarion Landrum scored on a 25-yard run to take a 16-13 lead.

Buckhorn responded with a 50-yard touchdown pass from Terrence Robinson to Kyler Douglass to retake the lead 23-20 with 6:05 left.

Porter returned the ensuing kickoff 65 yards for a Grissom touchdown to put the Tigers up 27-23 with 5:55 left.

Tolliver-Williams put the game out of reach for Grissom with his scoop-and-score, but Buckhorn cut it to 34-31 on Robinson’s 1-yard TD run with 2:34 remaining.

Buckhorn (4-6) will travel to Hartselle as the fourth seed from Class 6A, Region 8.

Guntersville won the 108th meeting with rival Albertville. Wilsdcat quarterback Eli Morrison threw for 137 yards and 3 touchdowns and CJ Gomera rushed for 97 yards and a score in the win.

Julyon Jordan added 46 yards on the ground and a touchdown. Evan Taylor had 4 catches for 70 yards and 2 touchdowns while Cam logan had a 19-yard touchdown grab.

Guntersville (8-2) will travel to Fairview for the first round of the Class 5A playoffs. Albertville finished the season at 1-9.

Huntsville cruised to the win as Carlen Long scored 4 touchdowns on runs of 85, 10, 5 and 4 yards.

As the No. 4 seed from Class 7A, Region 4, Huntsville will travel to Alabaster to meet Thompson next week. Hazel Green (4-6) travels to Muscle Shoals in the Class 6A postseason.

Class 3A top-ranked Mars Hill Bible sprinted to 35 straight points before Class 1A second-ranked Linden managed a touchdown with 18 seconds left in the game.

Jay Dobbs led the rushing attack with 17 carries for 106 yards with a 57-yard TD while JO Owens ran 10 times for 67 yards with a 6-yard scoring run.

Quarterback Aidan Kennedy also ran for a 1-yard TD and threw to Damian Thompson for a 48-yard pass to open the scoring.

Class 2A top-ranked Fyffe scored three second half touchdowns to secure the victory over Sylvania after the game was tied 14-all at the half.

Running backs Logan Anderson and Brodie Hicks led the attack, combining for 3 TDs and 251 yards rushing. Anderson ran 19 times for 133 yards and 2 TDs while Hicks ran 20 times for 118 yards and a score.

Hicks capped off the scoring with a 9-yard run in the final quarter for Fyffe (10-0).

Dobbins completed 4-of-6 passes for 53 yards and 2 TDs, including a 11-yard scoring pass to Hunter Machen in the second quarter.

Class 1A third-ranked Brantley (8-2) was led by quarterback Jayden Parks, who completed 12-of-13 passes for 270 yards and 4 touchdowns.

Anthony Rodgers rushed for 180 yards and 3 TDs on 20 carries for Pike Road. He also had a 75-yard kickoff return for a score.

Jaylan Jarret had 5 tackles, a fumble cause and recovered and a TD reception.

Pike Road (6-4) will host Spanish Fort in the first round of the Class 6A playoffs next week.

Meek completed its first undefeated regular season since 1958 with the win over 3A Oakman. Meek is ranked eighth in Class 1A.

The Tigers were led by Cam Deaver, who ran for 256 yards on 26 carries and a pair of touchdowns. Ory Frith added 87 yards on the ground and a touchdown. Blake Miller also scored for Meek.

Braylen Roberts had three sacks and eight tackles for the Meek defense.