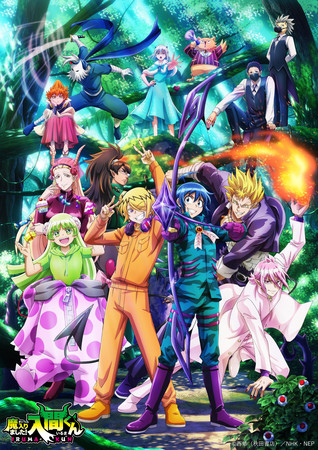 Crunchyroll announced on Friday that it will begin streaming the English dub for the third season of the Welcome to Demon School, Iruma-kun anime on Saturday.

The new members of the English dub cast include:

In addition, the cast from the previous seasons will be returning. Stephen Fu will replace the late Billy Kametz as Asmodeus.

Eric P. Sherman is producing the dub with co-producers Mami Okada and Mio Moroe at Bang Zoom! Jalen K. Cassell is directing the dub, and Rachel Robinson is writing the script. Okada is also the casting director. Jessica Peace is the production manager with coordinators Kana Ozaki and April Garner. Patrick Rodman is the sound supervisor. Ben Harrington is the re-recording mixer, dialogue editor, and Recording Engineer. Keeley Pierson is also a Recording Engineer. Rayner Tharn is the audio operators manager. Samuel Carrillo and Ismael Yanez are assistant engineers. Kaylyn Saucedo is the video technician. Tetsuya Fujita is in charge of spotting.

The third season debuted on October 8. The season centers on Iruma competing with classmates to gather ingredients in a demonic jungle, all to prepare for an upcoming harvest festival.

The third season includes returning main staff members. Makoto Moriwaki is returning to direct the third season at Bandai Namco Pictures, with Kazuyuki Fudeyasu once again in charge of series composition. Yumiko Hara is the new character designer. Akimitsu Honma is once again composing the music.

The story of Mairimashita! Iruma-kun follows Iruma, a kind-hearted 14-year-old boy whose parents sell him to demons for their own selfish interests. However, the demon he is sold to has no grandson of his own, so he dotes on Iruma and sends him to demon school.