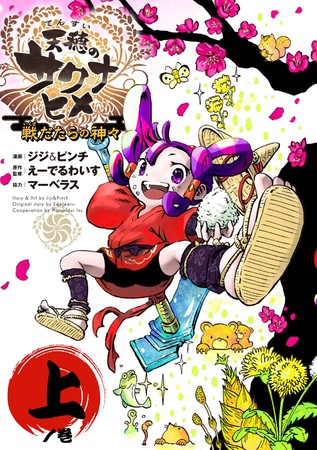 Hero’s Inc.‘s Comiplex website revealed on Friday that Tensui no Sakuna Hime: Ikusa Datara no Kamigami, the manga adaptation of Edelweiss and Marvelous, Inc.‘s Sakuna: Of Rice And Ruin (Tensui no Sakuna Hime) game, will end in its next chapter. Hero’s Inc. has been publishing new chapters monthly.

Edelweiss’ side-scrolling action platformer game Sakuna: Of Rice And Ruin launched for PlayStation 4, Nintendo Switch, and PC in November 2020. XSEED Games released the game in English, and it describes the story:

Players take on the role of Sakuna, a proud yet lonely harvest goddess who is banished to a dangerous island with a group of outcast humans. Sakuna tames the island by defeating demons using farm tools as weapons while chaining attacks with her “celestial scarf,” a magical item that allows her to grapple distant enemies and platforms.

Monthly Hero’s launched in November 2011, and all the manga in the magazine moved online to Comiplex at the end of 2020.