Crunchyroll and Toei Animation hosted the world premiere of One Piece Film Red‘s English dub at the Animation Is Film Festival. Earlier this month, the Straw Hat Pirates took over New York City’s Times Square, giving fans a chance to bask in the sea of lights with their favorite characters. Attending cast members AmaLee (Uta), Ian Sinclair (Brook), Sonny Strait (Usopp), Stephanie Young (Nico Robin), Rachel Robinson (Brulee), Patrick Seitz (Franky), and ADR Director Anthony Bowling spoke to ANN on the red carpet before the screening. Surprisingly, the event was the first time some of them have seen the entire film. 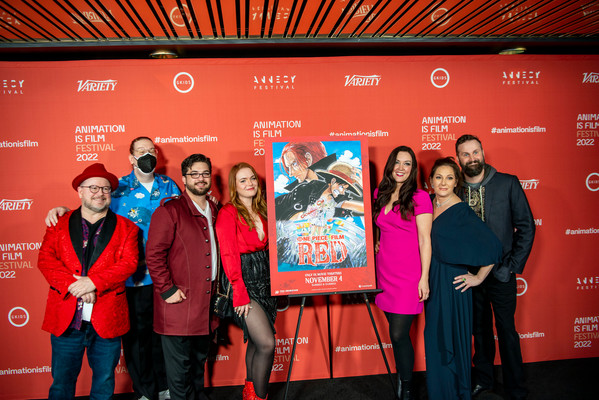 ANN: What were your first thoughts when you heard that there would be a new movie?

Ian: Honestly, playing Brook is one of the best things in my career. I love playing Brook because he’s a joyous experience. My job is pretty much to make the director, engineer, and everybody else laugh. It’s kind of the best job in the world. To get to do another movie, and one with all the music, was really exciting.

Stephanie: It has been really exciting to see the development of Robin’s character and her outfits that have gone along with that. Just how she’s become more bold and more confident and more open. I love to see that with her. This movie is a dream, especially coming off 2020 when we were so isolated and separated. Granted, we were still able to record from home. Crunchyroll was incredibly for putting together that pipeline. Coming out of that time, then being able to celebrate this story and Oda’s brilliance is just very exciting.

Sonny: It was exciting, and it couldn’t have come at a better time too. One Piece has blown up in this country. I hear over and over that it’s because of the pandemic. People are looking for more content, and One Piece is nothing but content. It’s one of those things that if you watch it, you’re going to be hooked for life. Or at least a good 40 years.

Rachel: If you ask any voice actor, they’ll tell you they’re excited to get to work again. That’s the first thing they get excited about. What’s my favorite job? The next one. At the same time, Brulee is one of the most fun characters I’ve ever played. I got a little bit spoiled because I got to work with Anthony, who said, “I saw this role, and I thought of you. Would you be interested?” I was like, “Hell yeah!” She’s so much fun to play. I’m sure you’ve seen how a lot of villains tend to be very one-dimensional and she’s not. In the story that they get to tell in the Whole Cake Island Arc—I think she’s in about 14 or 15 episodes—it’s very clear what her whole journey is. Getting to be in this, I was like, “Oh, bonus!” It was only one day, but whatever. I get to be here, and I get to play with my friends.

What is it like for you all to be here?

Anthony: This is insane and was unexpected. I couldn’t be more excited as this is a historic event, and it’s wonderful for One Piece fans.

Rachel: I haven’t seen the film, so I don’t know everything that happens. In this movie, an artist tries to save the world and it’s everything that happens around that. I do believe that art will save the world—if not outright, it’ll have a huge part in it. We really need this kind of thing right now. One thing I’ve noticed about the anime community is that it’s close-knit. People from all different walks of life and beliefs can celebrate these things that they love in this world. I tried to find a dress that was like Brulee, but it’s very hard to find a white dress that isn’t a wedding dress.

(To AmaLee) How did you get casted as the role of Uta?

AmaLee: They called me up and offered me the role. I had seen stuff about Uta online and I love Ado. She’s an amazing singer. I was shocked and honored!

(To AmaLee) Do you plan on covering the songs from the movie?

AmaLee: I plan to cover every single one of them! I’ll be uploading “New Genesis” on November 4 to commemorate and celebrate the release of the movie. 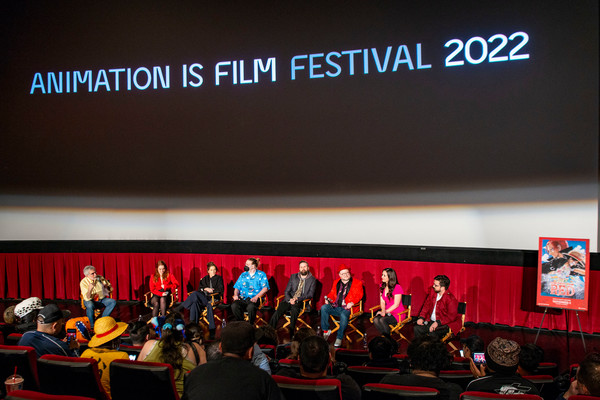 How long ago did you guys start recording?

Anthony: For this movie, we started recording in August. Early to mid-August. The process of mixing took us about a month to get done. We moved kind of quick on that. Luckily, most of the people in the movie are experienced. They know their characters, so it’s just a joy to be able to work together.

How did you react when you saw the character visuals for the film?

Ian: I loved it! I wanted to wear his hoodie. I’m wearing a hoodie partially because he wears a hoodie for a lot of the movie. But I couldn’t find the exact one, so we got a little of Luffy on it.

Sonny: Oh my God, Usopp’s festival wear is… I don’t give away too much, but I’m a huge KISS fan. I was like, “I want a rock and roll all nite 🤘.” His outfit later is awesome as well. It’s such a good film. Usopp has some great moments in this one. He’s got daddy issues, and he faces them in very cool ways.

Were you all recording in the same booth? How did it feel to step back into the studio?

Stephanie: That’s a great question. It’s interesting when we step back into the studio. When I stepped into it, it was a homecoming to me. I’ve been voicing Nico Robin for 15 years. It was good to finally go back into the studio and see our director, engineers, and the creative crew of One Piece. We’re a family as the Straw Hat Pirates. I couldn’t stop hugging them.

Rachel: What’s funny is that I recorded this entire character from our booth in our living room at home. I am happy to go wherever people need to be, but the pandemic changed everything. Everybody had to make some pretty fast adjustments. We built a booth in our living room, we rigged it, and it works great. If they had asked me to come to Dallas, I would have. But we did the whole thing from home, so I think in a weird way I’ve kind of gotten used to it. Even when we went into the studio back when it was FUNimation, it was just you, the ADR Director, and the engineer. Rarely, if ever, do you record with other people. What I do like is that if other people have recorded before you—which is very often the case—you get to hear what they did. You get to make a choice based on that without necessarily starting from nothing.

(To Anthony) As an ADR Director, how did you work with the cast when they’re not all in One Room?

Anthony: That’s kind of been the status quo for how we do it. When we did this movie, it was so much more intimate. It’s a self-contained story, so we get these story sessions where we connect, and I let them know who directly is affecting them. For example, knowing which Straw Hats are affected helps keep that tension there. We get to play that in our favor too.

What can the fans look forward to in this movie?

AmaLee: This movie is super fun, and fans are going to be really happy with some of their favorite characters coming into the movie. There’s so much music, and there’s something everyone can fall in love with.

Ian: A fantastic One Piece movie with incredible music, and some cool secrets you didn’t know about.

Anthony: This movie is unlike any other. I know that you can say that all you want, but this truly is unlike any other One Piece anything that they’ve done. The music is phenomenal. Just to be able to see a different angle and a different aspect of what One Piece can do. I think they have a lot to look forward to. Of course, getting to know a little bit more about our favorite pirate: Shanks. Fans are going to love what they get to see with him and his crew.

Rachel: This is exciting because you get to see the final product. A lot of times, I’ll just watch it streaming or I’ll wait for the DVD. This is the first time I actually get to see something that I’m in on the big screen. I’m just as excited as everybody else. I have no idea what to expect. I’m only in it very briefly, but it’s so great to be a part of this.

Stephanie: There are a lot of twists and turns. I love the fact that music is a central figure in this story. I’m a musician and a singer-songwriter, so I connected with that instantly. The music in this film is upbeat, fun, beautiful, and cool. I just think that element of this movie really separates it from the others. You still get your amazing heroes, and storytelling along with the Straw Hat Pirates.

Patrick: Music, adventure, friendship, and someday the One Piece itself. In the meantime, 300% more nakama.

Sonny: YOU WILL NOT BE DISAPPOINTED!

One Piece Film Red releases in US theaters on November 4th, 2022.