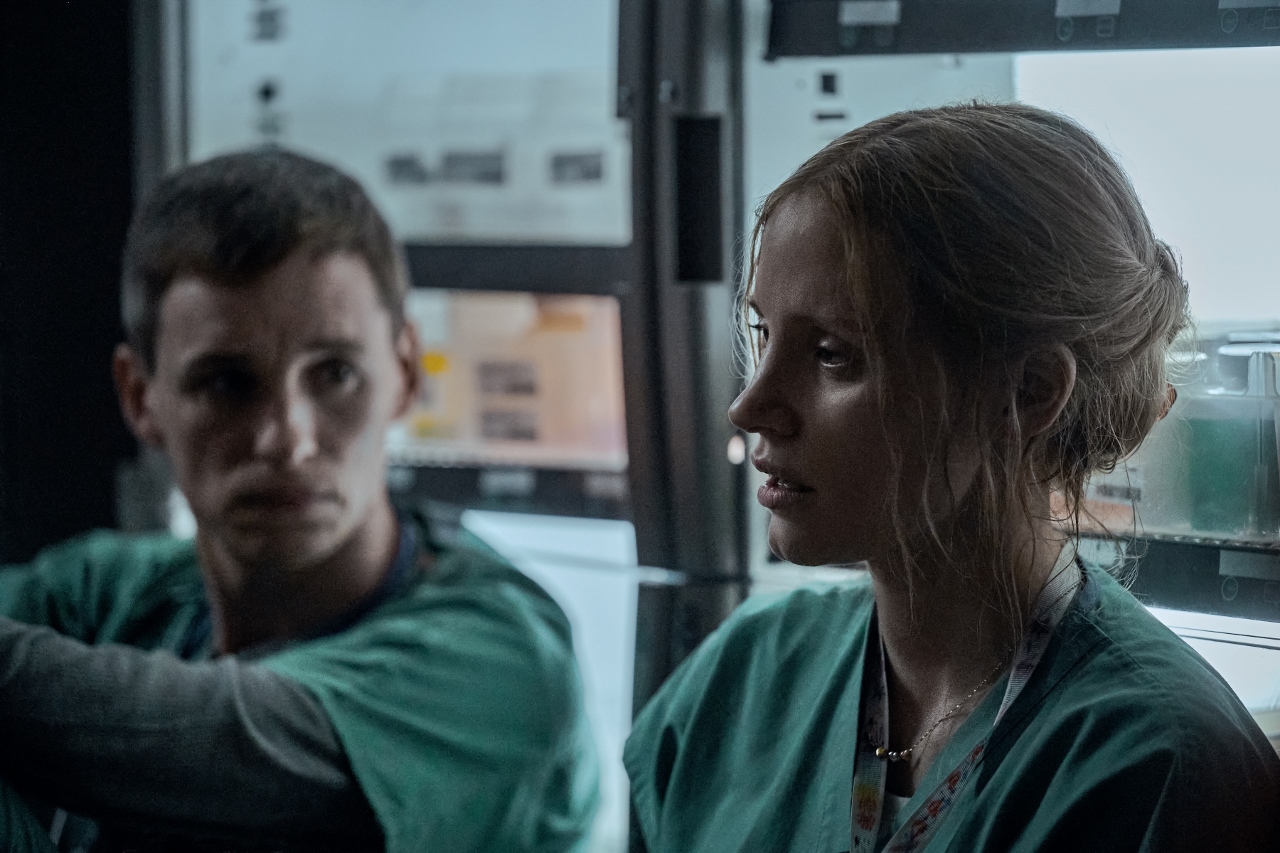 Directed by Danish filmmaker Tobias Lindholm (TV’s “Mindhunter”) and based on the best-selling book by American author Charles Graeber, the Netflix release “The Good Nurse” boasts best actor Academy Award winners Jessica Chastain (“The Eyes of Tammy Faye”) and Eddie Redmayne (“The Theory of Everything”) as a pair of nurses at a New Jersey hospital in the early aughts, who form a bond regarding a secret and then find themselves in the middle of a murder investigation.

Amy Loughren (Chastain) is a hard-working, compassionate ICU nurse with a secret. She has a potentially fatal heart ailment, but will not have medical insurance until she has worked for one year at her hospital in suburban New Jersey. She has several months to go. Although she has been suffering from dizzy spells and arrhythmia, she keeps this secret from her employer and from her two young daughters. Amy has formed a bond with an elderly patient in the ICU named Ana (Judith Delgado). She has also befriended Charlie Cullen (Redmayne), the new nurse in the unit. Charlie has two children, too. He is divorced and not good terms with his ex. He is friendly, experienced and accomplished, and he has offered to help Amy after noticing her distress and learning about her condition.

Soon, he becomes friends with her daughters as well, who adore him and welcome his presence in their home and lives. Then, Ana dies suddenly of unknown causes, and the police are called in only to realize that Ana died seven weeks before they were notified and that the hospital has run its own investigation headed by former nurse Linda Garran (Kim Dickens). The homicide detectives (Noah Emmerich and Nnamdi Asomugha) suspect foul play. They also suspect that the hospital is hiding something from them.

“The Good Nurse,” which is based on an awful, true story, resembles the overrated Academy Award-winner “Spotlight” (2015) in its form and its content. It is a tale about organizations willing to sacrifice lives in order to protect themselves from litigation and corrupt governments willing to allow such organizations to do that using bogus and illegal contractual obligations. Amy comes to suspect that something is wrong after a young mother in her care suddenly goes into cardiac arrest. But she is legally bound not to discuss her suspicions with the police without a legal representative from the hospital by her side. The two policemen investigating the two cases find this condition unacceptable. How can an employee testify about her employer with the employer’s lawyer present?

Chastain and Redmayne bring this story to life with great power and drama as you might expect from a pair of Oscar winners. But I have a few problems with “The Good Nurse.” The screenplay by Scotswoman Krysty Wilson-Cairns (“Last Night in Soho”) is uneven and too familiar. A leaking bag that gives someone away does not stand up to scrutiny. And why doesn’t Amy ever explain why she is willing to risk her job and maybe her life by speaking to the police? Moreover, when we learn at the end that none of the corporations involved in the cover-ups regarding the murders depicted in this film have ever been prosecuted, it makes “The Good Nurse” seem like a waste of our time. What is the point if the corporate accomplices got away with it? Don’t we have enough to be depressed about?

Rated R. On Netflix and at Landmark Kendall Square.