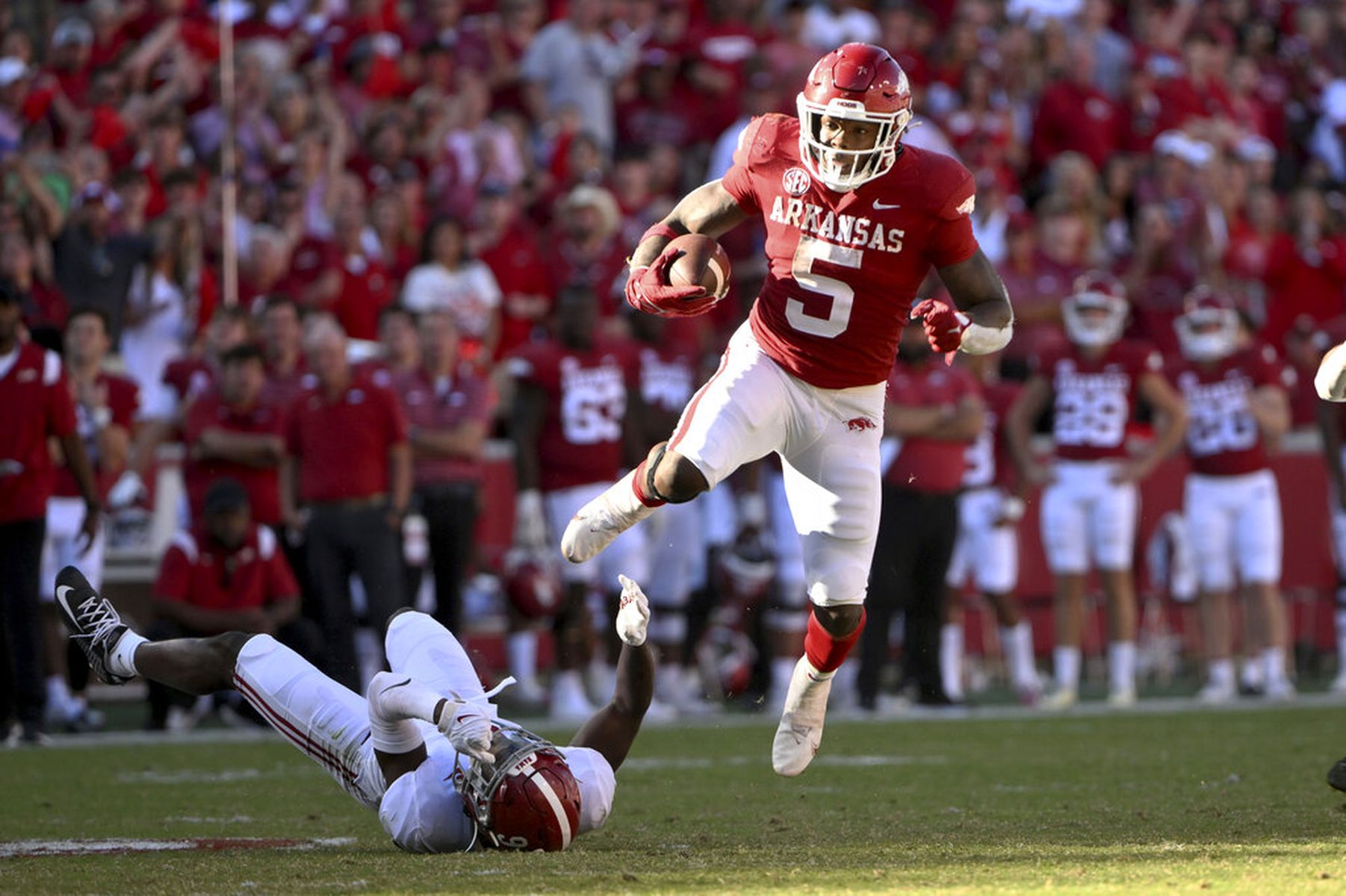 One of Auburn’s biggest weaknesses will face one of its toughest tests coming off the bye week.

When Arkansas visits Jordan-Hare Stadium on Saturday, Auburn’s shaky run defense will go toe to toe with one of the nation’s best rushing attacks in a matchup that seemingly puts the Tigers at a considerable disadvantage.

“It’s going to be a good challenge for us this week, man,” Auburn linebacker Owen Pappoe said. “We’ve just got to stay disciplined. We can’t have guys hopping out of gaps. Just, shoot, win at the line of scrimmage and be physical this game.”

That’s something Auburn’s defense has been unable to do well this season, particularly in recent weeks. In its last game out prior to the bye week, Auburn’s defense was decimated by Ole Miss’ rushing attack in a historically bad performance for the Tigers, giving up 448 yards, three touchdowns and 6.49 yards per carry to the Rebels in a 48-34 road loss.

It was the worst performance by Auburn against the run in at least 20 years and likely one of the worst in program history. The root cause: missed fits and missed tackles — things players and coach Bryan Harsin pointed to after the game and reiterated again Monday after having more than a week to review and assess the issues. According to Pappoe, Auburn’s coaches counted at least 20 missed tackles against Ole Miss.

“If you look at the game — we could’ve helped ourselves by being in better position at times, having a better call at times, and then the tackling always becomes a factor,” Harsin said. “I think every defensive coordinator and every defensive coach would say that in every game, right? You got to attack. When their backs are good — they were hard to tackle. Those backs are really good players. They make it really hard to tackle. I thought we did have guys in position, and they broke tackles.”

The showing against Ole Miss was also the latest entry into a growing list of concerning performances by the Tigers’ defense against the run. A week earlier, on the road at Georgia, Auburn allowed 292 yards and six touchdowns as the Bulldogs averaged 7.49 yards per carry — the most surrendered by Auburn in a single game since 2015, when LSU averaged 8.56 yards per carry in that year’s matchup in Death Valley.

It doesn’t get any easier for Auburn as it returns to the field this week for a division matchup against Arkansas (11 a.m. on SEC Network). The Razorbacks run the ball more than any non-service academy team in the country (48.14 attempts per game) and is ninth nationally in rushing offense at 240 yards per game while averaging almost 5 yards per carry.

They’re led by the SEC’s leading rusher, Raheim Sanders, who is eighth among all FBS rushers at 124.29 yards per game. He’s also averaging 6.21 yards per carry on 20 attempts per game, with seven touchdowns on the year.

“Five (Sanders) is a real patient dude,” Pappoe said. “Doesn’t bounce the ball a lot and stays on his track the whole time. And they’ve got a damn good O-line too.”

It’s not just Sanders who makes Arkansas’ rushing attack go; the Razorbacks also rely on quarterback KJ Jefferson to complement the ground game. The 6-foot-3, 242-pounder is 13th in the SEC in rushing (second among league quarterbacks) with 57.33 yards per game, adding another dimension to Arkansas’ offense that Auburn must account for.

“They use both those guys really well in the run game,” Auburn edge defender Derick Hall said. “They’re both dynamic, really athletic and can move the ball down the field really quickly. Like I said, fits is going to be the biggest thing for us this week — just making sure everybody’s playing their gap and playing fundamentally sound football, playing complementary of each other, everybody doing their 1/11th.”

That has been the message for Auburn throughout the bye week and again this week, as the Tigers gear up for the final stretch of their regular-season slate: Do your job, stay focused on your part from snap to snap and finish plays.

“We’ve got guys that just lose focus because you worry about, I don’t know whether it’s a lack of trust or something, but the guy next to you,” Pappoe said. “But just focus on your job and doing it to your full ability and just wrapping up.”

It sounds simple, of course, but Auburn has struggled to put it to practice when the lights come on, particularly in recent weeks. The additional time off — to regroup, recover and reassess things heading into the final five games of the season — could prove beneficial in that regard. At least, that’s what Auburn is banking on ahead of Saturday’s showdown with Arkansas.

“When you’re playing against really good players, you’ve got to bring your very best,” Harsin said. “…It wasn’t much different (against Ole Miss), it’s just now, we are able to finetune it and able to pinpoint those things that have come up in every single game. You just keep working on it to get better.”