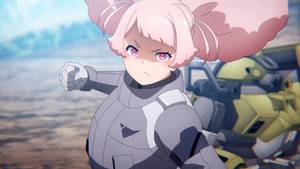 Okay, how the heck does Chuchu’s hair compress into her helmet while preserving the floof? The technology in this setting knows no bounds!

Jokes aside, this was an enjoyable episode of G-Witch, which slows down the plot and intrigue to finally start fleshing out the side cast. The first major faction to get the spotlight is the Earthian house, which Suletta quickly befriends in her bumbling way. What’s interesting about the school setting here is that although it’s a microcosm for the political conflicts in this world, the kids aren’t so firmly attached to their allegiances that they’ll refuse friendship with people in their out-group. At this point, nobody is thinking about Suletta’s growing ties with the Earthians as a broader alliance between Earth and Mercury, although Prospera’s ambitions in the previous episodes certainly foreshadow an eventual turn in that direction.

Chuchu, with her ridiculous hair and tsundere attitude, was definitely the star of the episode here. She’s the slowest among the Earthians to warm up to Suletta, but she may prove to be among her staunchest allies, given how she throws a mean punch on Suletta’s behalf at the climax. What stands out to me is the reason behind her change of opinion on the newcomer; it’s not because of her strength, but rather her weakness. When Suletta starts bawling and saying she wants to give up, she inadvertently reveals that she’s not the kind of person who wants to dominate the school. This moment is enhanced by Kana Ichinose‘s voice acting, who portrays Suletta’s tears in a purely unguarded way.

There’s not much action in this episode; mostly, we just see Mobile Suits walking and tripping on landmines as part of a regular school exam. I wasn’t too bothered by this, though. It’s actually interesting to watch Mobile Suits applied to different tasks beyond conventional battling. Honestly, the biggest disappointment of the episode might be how quickly it brushed aside Jeturk’s proposal at the start. Not only does he immediately take it back, he continues to act stubborn and prideful in the following scenes, mellowing only slightly. Although I wasn’t necessarily expecting him to do a one-eighty in terms of his personality, it makes his proposal seem weightless in retrospect.

In general, however, I don’t have much to complain about with this show. The breeziness works in its favor overall. It’s good at making you care about both the school life and the politics. If I care this much about these oddballs already, this show will absolutely kick my ass down the road. Please don’t let these kids suffer too much.

Mobile Suit Gundam: The Witch From Mercury is currently streaming on
Crunchyroll.