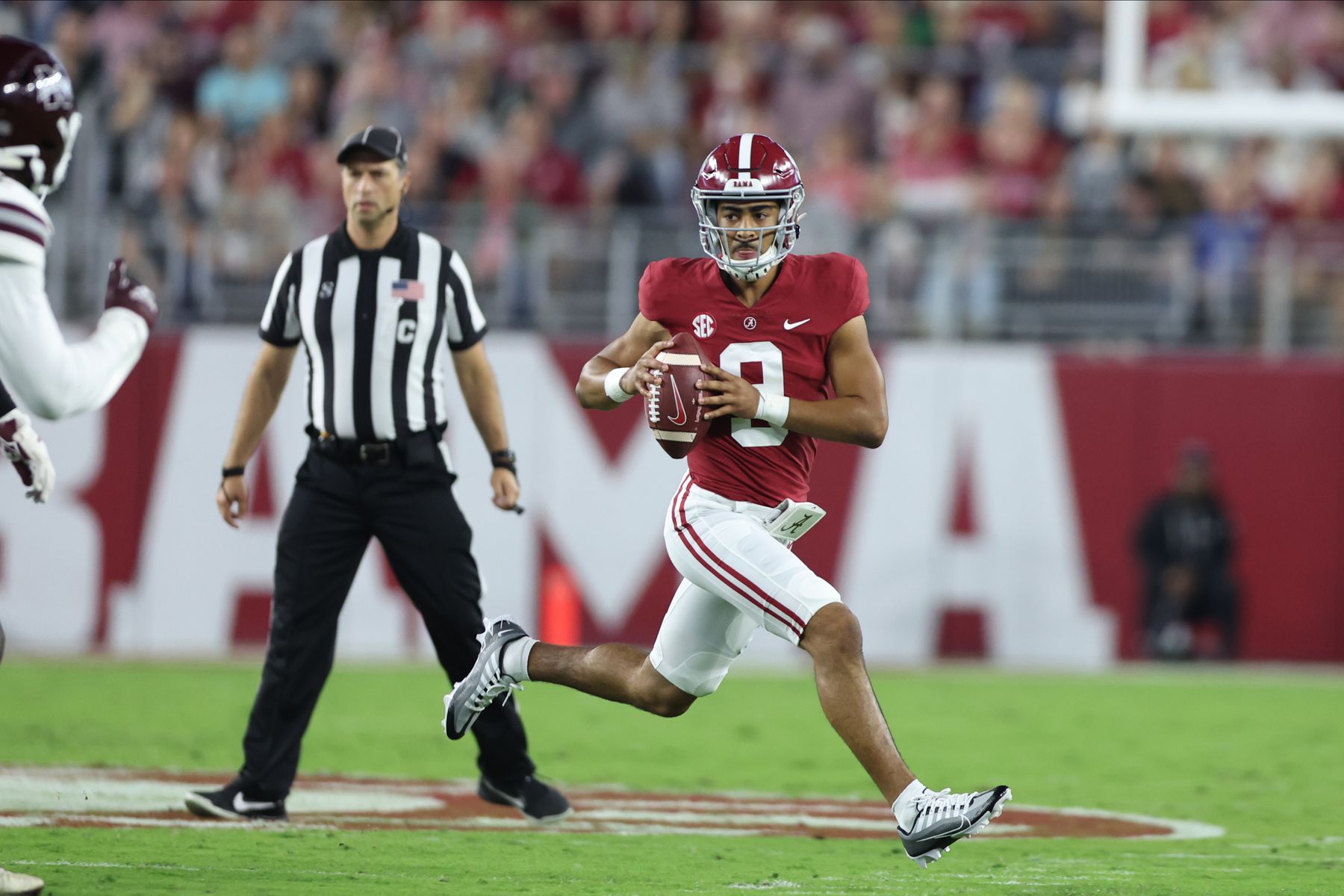 Alabama has used different formulas to win this fall: Ride a dominant defense; watch Bryce Young save the day; pound the ball on the ground. The offense hadn’t produced a number-one receiver or been very consistent, but it’s found ways to score. Saturday revealed the latest path.

Young recorded more throwing attempts (35) than the team’s total rushing yards (29). Aside from a 19-yard touchdown from Jahmyr Gibbs, Alabama averaged 0.38 yards a carry. For the first time all year, the No. 6 Tide needed to rely on its passing game when its ground attack was lifeless. It did so successfully in the first half versus No. 24 Mississippi State.

A stout defense and Young’s playmaking led Alabama to a three-touchdown lead at the break, it eventually won 30-6. Like it has in victories, the offense deployed multiple pass-catchers with a few standouts. Ja’Corey Brooks led with 74 yards receiving. JoJo Earle and Traeshon Holden each snagged touchdowns. It’s not that the Tide was perfect — it still suffered a mid-game lull and matched the Bulldogs’ six points in the second half – but it showed a new dimension ahead of the off-week.

“I thought the receivers did a really good job on a couple big plays, probably the only explosive plays we really had came off (improvisations),” Nick Saban said. ” … When you have a guy like Bryce you wanna be able to take advantage of his talent and receivers doing a good job can certainly contribute to that on a large degree.”

Saban on not suspending Jermaine Burton: ‘I didn’t think it was necessary’

Heading into Bryant-Denny Stadium, JC Latham said there was some “outside noise” he wanted to silence. Namely, the claims that Alabama was a running offense or it couldn’t keep Young standing. It did its part with seven plays gaining at least 15 yards and limiting the Bulldogs to a pair of sacks. Mississippi State committed a trio of roughing-the-passer fouls on Young, admittedly “poking the bear” that was Alabama’s offensive line.

While Young is making highlights and causing defensive-coordinator convulsions in the pocket, Latham is blocking blind. The offensive tackle said he can’t look backward mid-play to find his quarterback. So Latham mirrors his pass-rusher, figuring that when his assignment steps inside, Young is climbing the pocket in tandem.

Late in the first quarter, Young was directing traffic while avoiding Mississippi State rushers again and sprinting back across the line of scrimmage. While the line handled the three-man pass rush Young eyed Earle downfield and noticed he’d be open with a point and flick of the wrist. Forty yards later, Young had the game’s opening points.

“Whenever you have that, you try to get through your reads,” Young said. ” … My line did a great job of allowing me to make those plays happen. For me, it’s just trying to remain a passer and make things happen.”

Overall, Saban said the offense was limited in its play-action because of the rushing struggles. There were a few run-pass option snaps where Saban said the latter should’ve been executed. In the second half, the Tide went four of 10 on third down and were outgained by 63 yards.

Alabama’s quarterback is still not fully participating in practice, Young said, watching reps from behind the starters. The upcoming idle week should offer more prep time for LSU on Nov. 5 and extra days for Young’s sprained AC joint to heal.

“I think it’s just that consistency, making sure that we’re the same team again,” Young said when asked what UA will emphasize this week. “We stalled a bit.”