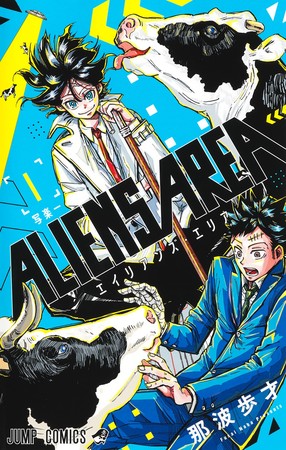 The magazine announced that the second compiled volume as well as the third and final compiled volume will ship on February 3. One or both volumes of the manga will include new content.

Naba launched Aliens Area in the 27th issue of Shueisha‘s Weekly Shonen Jump magazine in Japan on June 6. Viz Media and MANGA Plus began publishing the manga in English on June 5.

MANGA Plus describes the story:

Tokyo, Planet Earth… High schooler Tatsumi Tatsunami lost his parents at a young age and now works multiple part-time jobs to live a hectic but peaceful life with his younger siblings. One day his body undergoes a sudden change… And now mysterious beings are showing up at his house! In order to protect the people he holds dear, in order to protect Earth (or “area”), Tatsumi must awaken! He better, because “they” are already here! Rising star Fusai Naba brings this new cosmic action fantasy series to Shonen Jump!

Naba previously published a one-shot titled “Apollo” in Weekly Shonen Jump as an entry for the Gold Future Cup contest in 2018.