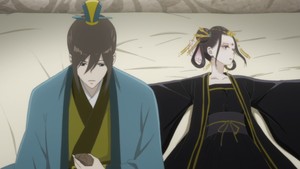 I think anyone who asks someone if their carving is of “a fat lizard” knows what the answer is. That doesn’t stop Emperor Gaojun, of course, but given that Shouxue is fighting him tooth and nail in his attempts to get to know her better (and very likely to romance her; his pointed questions to the priest about the Raven Consort this week indicate that he’s very interested in her), it’s hard to blame him. It feels as if he’s willing to resort to anything if it’ll get him a response. But perhaps he’s getting through to her, at least a little, because when she’s unsure why Jiu-Jiu is so mad at her for attempting to give her a gift, it’s Gaojun that she asks for advice. Granted, she doesn’t know many other people she could ask, but it’s still a marker of her slowly building trust for him, and that ought to make him happy.

Not that the conversation is without its issues, because she clearly tells him that the gift she attempted to give Jiu-Jiu was the hair sticks he himself gifted to her. Gaojun, like Shouxue, tends to keep his emotions firmly in check, but his reaction to this bit of information lets us know that he’s not the most pleased with this. In fact, he makes a point of telling her not to give away the amber fish he gave her, and what’s more important here is that he also tells her why: the fish was made for him by Ding Lan, a man he cared deeply about…a man the Empress Dowager had killed.

The further we go into this story, the tighter the Empress Dowager’s grasp on the court is revealed to be. The spirit Shouxue is tasked with saving this week is that of a skylark, a small songbird who once belonged to a young woman known as the Skylark Princess. Unless I’m misunderstanding something, I believe she was Gaojun’s half-sister, the daughter of the former emperor and a concubine, and for this horrific sin, she was forced to live in a small, remote building, and the Empress Dowager kept her from getting the medications that her sickly constitution warranted. This led to the princess growing her own medicinal herbs, which in turn led to her death: while trying to harvest a specific plant, she fell into the cold waters of a lake. We’re not sure if she drowned or died of complications from her dunking – I believe it was the former, but the way it’s talked about later in the episode makes me question that – but either way, knowing that she had to procure her own medicines because of the Empress Dowager’s hatefulness did lead to the princess’ death. That, if you’re keeping count, makes at least four deaths on the woman’s tally sheet, and very likely more will be added.

It’s possible that Shouxue’s ability to help the dead to move on is part of why Gaojun is so drawn to her. Like everyone else who has been touched by the Empress Dowager’s shadow, he’s lived with her poison, and as the post-credits scene shows us this week, he’s now being haunted by two of her victims in a very literal way. Whether this is based on the words she mouthed just before her execution or not isn’t yet known, but either way, Shouxue is plainly the Dowager’s opposite, bringing peace and rest to others rather than strife and pain. Even if he hasn’t seized on the idea of asking her to help the ghosts who visit him at night, Gaojun must find Shouxue’s willingness to help others a striking, and possibly soothing, contrast. In her world, death is merely another step on the journey, and that has to be comforting to him.

The bittersweetness of this week’s episode mirrors those that came before. Shouxue can’t fix what the Empress Dowager did, but she can, like that last fairy in Sleeping Beauty, transform her curse. Perhaps that’s why there are so many bird names in this series – birds exist in the liminal space between heaven and earth, able to go between them. Shouxue is the link that can sometimes help to connect the two, and that makes her powerful in a quiet way.

Raven of the Inner Palace is currently streaming on
Crunchyroll.