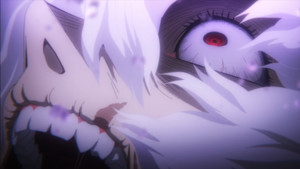 I don’t know how many people remember it, but back in 2015 there was a modern remake of Ushio & Tora. I won’t go into too many details, but in the final cour of the series, the main conflict revolved around preventing the series’ ultimate evil, sealed at the bottom of the ocean, from waking up and wreaking untold destruction upon the world. It’s hardly the first shonen series to use that kind of hook, but it always stood out to me because of just how much dread was built into the villain’s revival, to the point where the adaptation dedicated an entire episode just to it waking up and having every character involved quake in terror as it happened. It’s probably my favorite episode of the show, just for how well it sold the sense of uncompromising danger the moment represented for every other person in the story.

I bring it up because, while we aren’t quite at that level of terror just yet, this episode definitely came close at points, with damn near every hero on the scene fighting tooth and nail (and more, in Mirko’s case) to keep Shigaraki from getting out of that big bad science tube. We the audience know firsthand that Shigaraki was capable of (literally) single-handedly turning a city into a crater, and that was before he started getting a whole army of superpowers pumped into him. If he joins the battle, even if the heroes manage to pull off a win, countless innocent people are guaranteed to die before then. And that tension is the driving force behind most of this episode.

That’s important, because after last week zeroed in on Twice and Hawks, we’re now panning out again to the larger two-front battle, and things are getting juuuuust busy enough to feel jumbled if there weren’t something centering the attention. For one, we oddly start the episode from Tokoyami’s perspective, with him reminiscing about his time training with Hawks before possibly catching a glimpse of last week’s events. That transitions well enough into the confrontation between Dabi and Hawks, but it’s an odd choice when everything afterward is totally disconnected from that side of the war and we never even see Tokoyami again. It’s almost certain to return at some point, but it’s a good indicator that the scale and breadth of this arc’s action is getting unwieldy for an episodic format.

Thankfully the rest of “Inheritance” keeps us fully in the moment, bringing us back to the pro heroes’ brawl with the nomu, and by god does it get brutal. MHA‘s favorite way to exemplify badassery has always been heroes fighting on through excruciating injury, and that’s on full display with Mirko the brutalizing bunny rabbit. On a purely destructive level there have been worse injuries in this series, but for sheer discomfiting pain I think Mirko’s exposed leg muscles feel more visceral than Deku turning his arms into jelly bags ever did. It would honestly be too much for me – at least in the context of this show – if it all didn’t look so good, with this fight featuring a ton of sharp, fluid animation cuts that really sell the speed and power behind Mirko’s kicks, delivering the first ever impact frame made exclusively for perverts. It’s great, is what I’m saying, and shows our heroes aren’t holding anything back in stopping Shigaraki’s return. They’re putting everything on the line with this assault, and that means everything.

Of course, this wouldn’t be much of a story if the ultimate villain never got to actually do anything, so while all those efforts force the symbol of destruction out of his cocoon prematurely, Shigaraki nevertheless makes it back to the world of the living, and is about to have a lot less company. The sequence inside his head through all of this is trippy, but most directly it tells us that Shigaraki has fully embraced his role in all this, shrugging off the hands that held him back before, prepared to tear down the world that’s rejected him. It’s a chilling cliffhanger to end on, and the perfect punctuation to portend this war turning against our heroes.

My Hero Academia is currently streaming on
Crunchyroll.