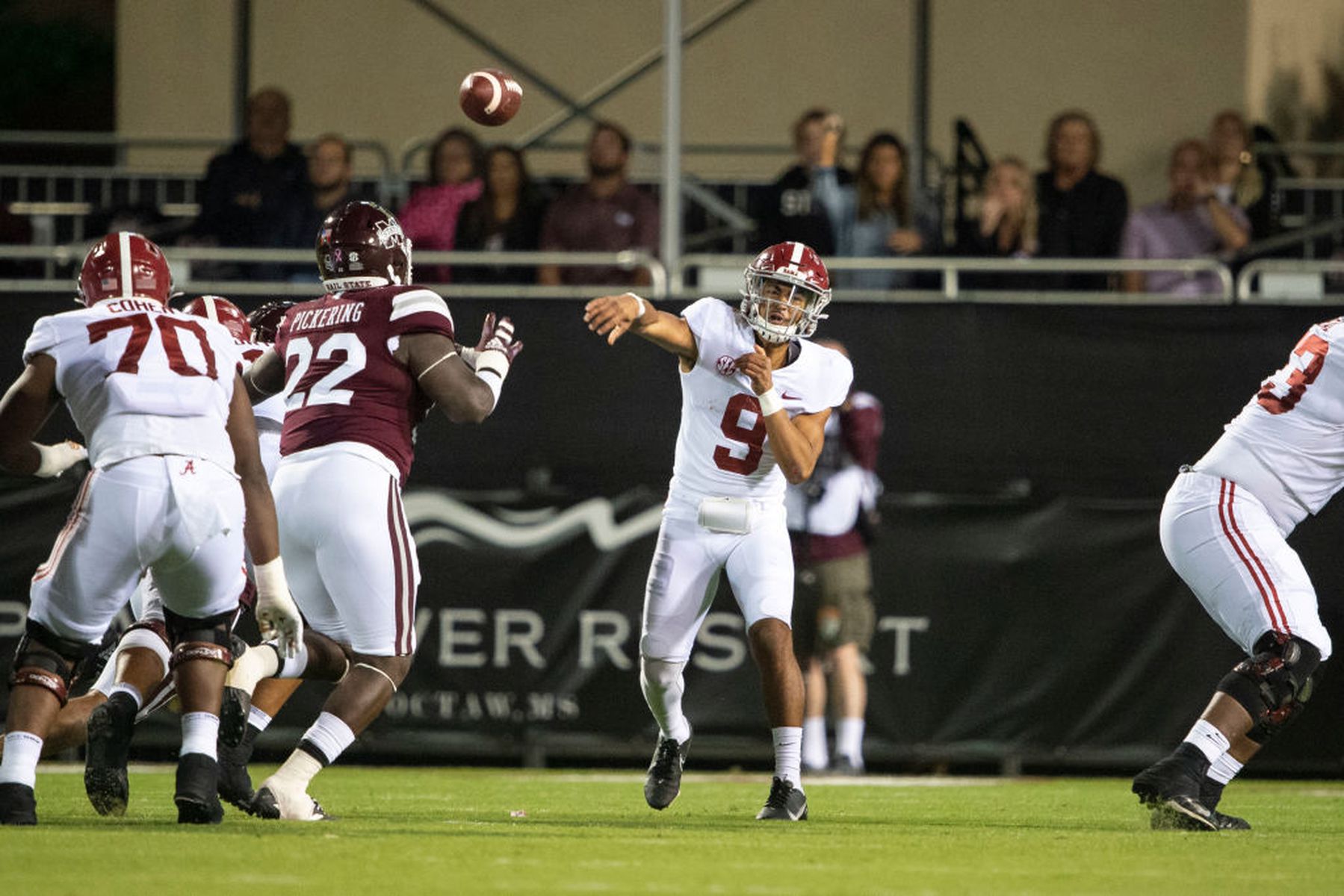 Alabama will be in action for an eighth straight Saturday when Mississippi State visits. Here are a few of the particulars to get you ready.

THIS GAME WILL DETERMINE

The stakes should be clear. Alabama’s defense was carved up by Tennessee in a high-scoring rivalry loss a week ago. This game will show the pride and character of this team coming off what could be a demoralizing. Alabama faced Mississippi State a week after losing to Texas A&M and pounded the Bulldogs 49-9 on the road.

THREE THINGS TO LOOK FOR

1. Receiver play: Seven games into the season, Alabama’s passing game is committee based. Running back Jahmyr Gibbs has the most catches (27) while five players have between 243 and 302 receiving yards. Sophomore Ja’Corey Brooks is on the high end of that spectrum coming off a big performance at Tennessee. He’s looking like the go-to receiver in key moments for an Alabama passing game that’s gone hot and cold. There could be a boost coming from the bench Saturday with Louisville transfer Tyler Harrell available for his debut. Nick Saban said he could have gone at Tennessee and with a receiver room in need of a home-run hitter, a player with Harrell’s speed could be a game-changer.

2. Turnovers: Alabama’s struggled at times creating and preventing turnovers as it enters the game No. 114 in turnover margin at negative-5. It finished on the positive side of the ledger for the first time all year at Tennessee with a recovered fumble and interception while losing just one. The Bulldogs are No. 22 at +5 in turnover margin with nine passes intercepted and five fumbles recovered while quarterback Will Rodgers has been careful with the ball. He’s thrown just 16 interceptions in 26 career starts and 1,279 passing attempts. That said, Rogers was intercepted three times in last year’s game with Alabama. Jordan Battle returned one for a touchdown as the Bulldogs failed to reach the end zone.

3. On the ground: Alabama’s seen plenty of production in the ground game with Gibbs leading the way but Mississippi State’s shown signs of life in the running game. With the air raid offense, MSU has been one of the lowest-ranked rushing offenses because it simply wasn’t part of the scheme. And while it’s still far from a service academy brand, the Bulldogs have shown the ability to run it. The 162 rushing yards and 36 attempts in an Oct. 8 win over Arkansas were both high-water marks in Mike Leach’s three seasons in Starkville. Running back Jo’quavious Marks is also a threat in the passing game averaging 5.8 catches a game with at least one in all 30 games he’s played at Mississippi State.

Alabama defense vs. MSU passing game: It’s no secret the Tennessee offense embarrassed the Crimson Tide defense. The pass rush couldn’t get home often enough as the Vols schemed mismatches in the secondary. Mississippi State brings the No. 9 passing attack averaging 333.0 yards a game but it hasn’t had much success against Alabama. The Bulldogs have yet to score a touchdown against the Tide in the Leach era as it managed just 163 passing yards in the 2020 shutout. It had 300 yards last year but the 5.5-yard average attempt was a season low on a night Will Anderson recorded four sacks.

107 — The number of meetings between Alabama and Mississippi State making the Bulldogs the Tide’s most common opponent. This will be the 23rd time they’ve met for Alabama’s homecoming game (18-4-1 Tide record) but the first since 1985.

WR Caleb Ducking: While the Bulldogs have six players with at least 200 receiving yards and three with 30-plus catches, Ducking leads in both categories. His 33 catches and 354 yards pace the Bulldogs along with his seven touchdown catches — almost double the next-highest total on the team. The redshirt senior did not play in last year’s loss to Alabama.