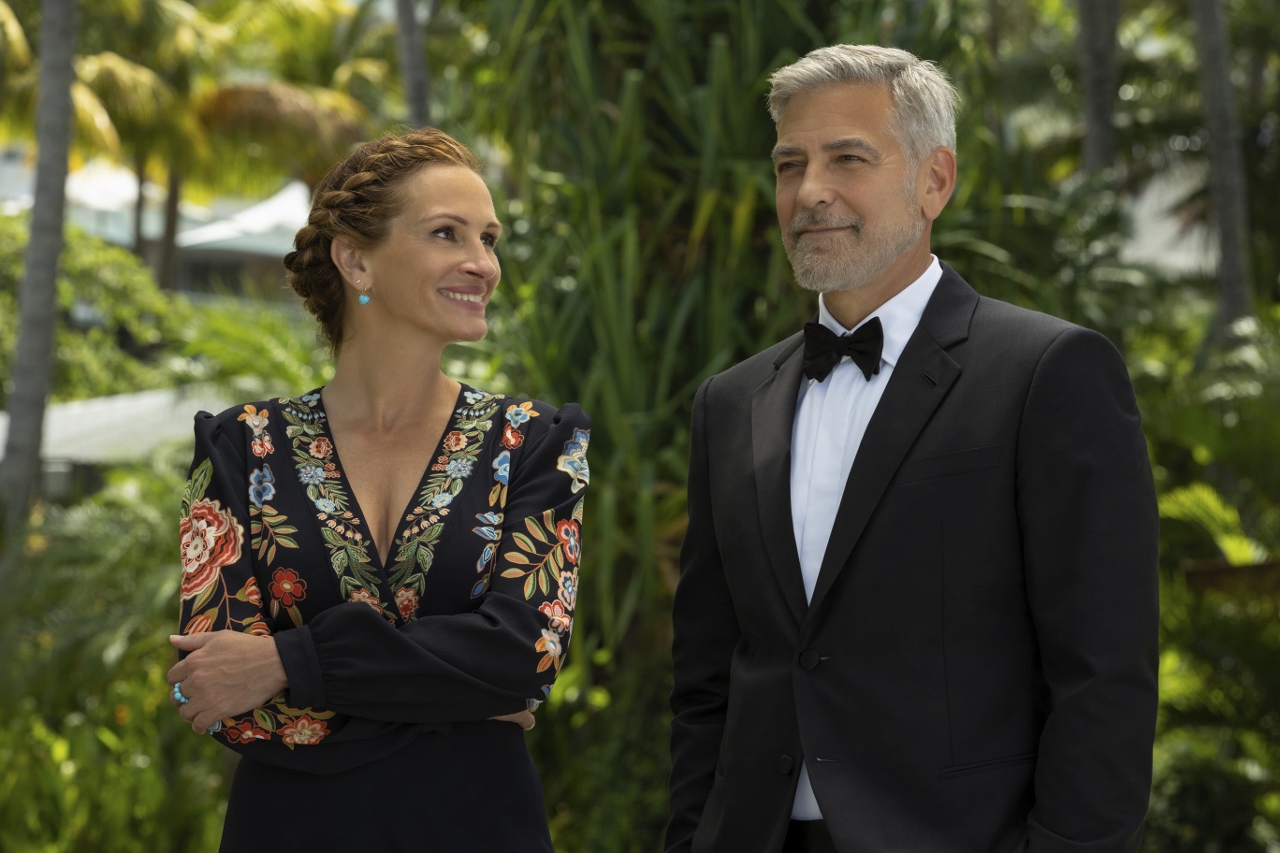 Charm is that rare quality that can be dropped, like so much confetti at a Champagne reception, by only the most established superstars during the course of an old-fashioned romantic comedy.

Charm is the whole point of “Ticket to Paradise,” insistently emphasized by George Clooney and Julia Roberts as they verbally spar pretty much nonstop in this welcome reteaming as long divorced couple David and Georgia Cotton, awkwardly reunited by their only child Lily (Kaitlyn Dever) as “Ticket” begins. First the Cottons snip, snap and quarrel at Lily’s graduation. Then, all too soon, they are both heading to photogenic Bali because Lily has seemingly lost her mind.

She has met a young seaweed grower – who we learn will soon be selling his dehydrated greens to Whole Foods – and has decided to marry him immediately, live in beautiful Bali and chuck her dream of law school.
Her alcoholic best friend, classmate and lonely child Wren (Billie Lourd, the late Carrie Fisher’s only child) thinks it’s fine.

Lily’s mom and dad arrive on a stealth mission to stop this wedding while pretending to be supportive.  A Bali lifestyle away from the stresses of modern life might well be a dream of people Clooney and Roberts’ age who after a lifetime of work might want to swim with dolphins, watch sunsets and drink. But would a smart ambitious woman on the verge of realizing her long-held dream really chuck it because she feels “out of balance” to live in a culture where she doesn’t speak the language?

Because this “Ticket” is not really about Lily’s choices but its top-billed stars, the two endure misunderstandings, failed plots, slapstick shenanigans and even a malicious dolphin. Not much of this is funny. The pacing is, we say kindly, leisurely.  Roberts spends most of her time flashing her megawatt smile – except when she’s snarling.

Two semi-subplots perk up the pace.  First, on the plane over a chatty middle-aged woman makes intrusive small talk with our stars and as played by Geneviève Lemon she’s funnier than anything else to come. She’s even brought back later in the picture just for the sheer joy of seeing her again.

David might as well be a celibate priest because he has no amours – which means he’s eligible for a marital reunion. That’s complicated by Georgia’s current long-distance affair with hunky, decades younger pilot Paul (Lucas Bravo) who gets laughs being head over heels besotted.  Much good that it does him.