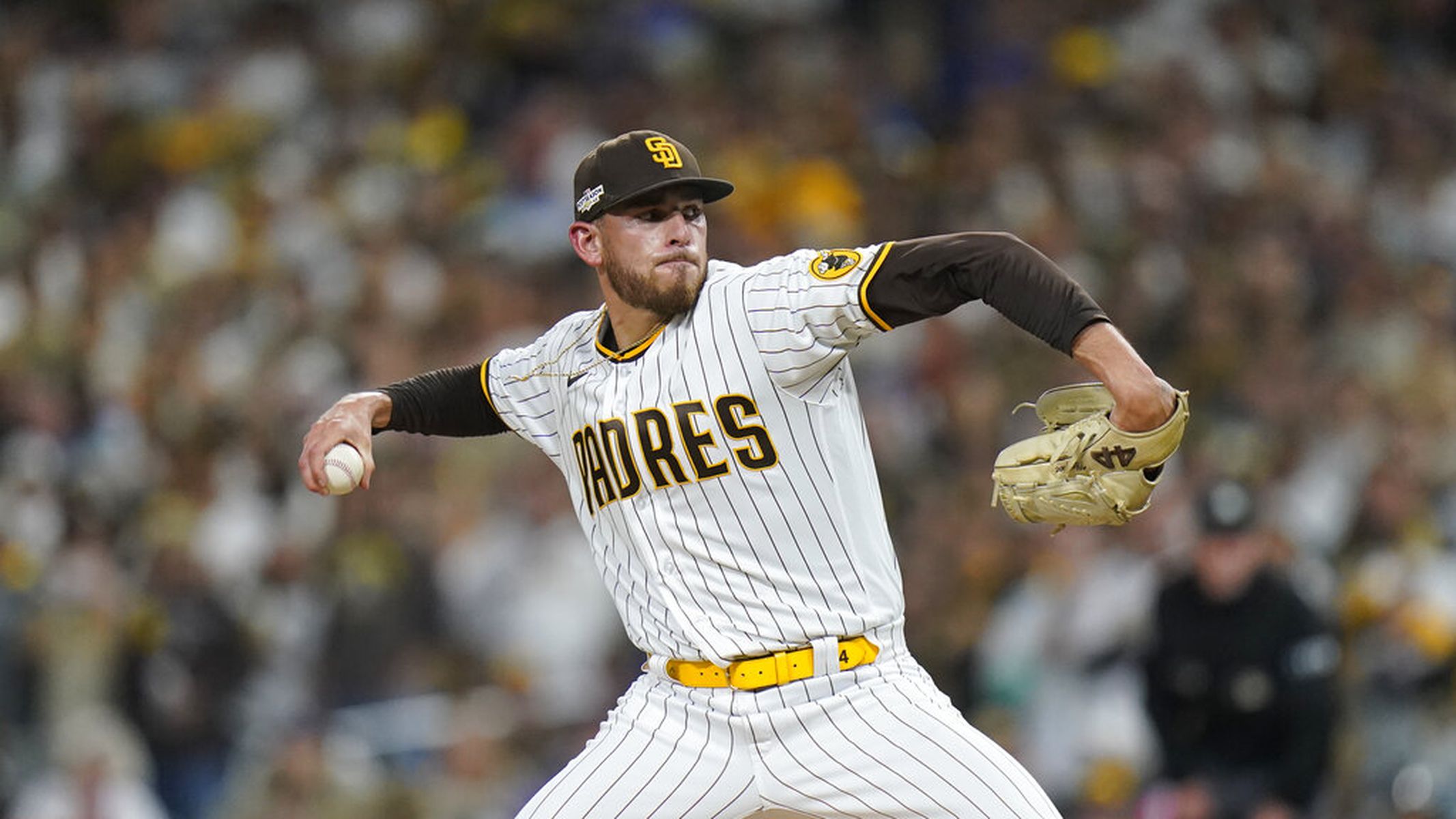 The Philadelphia Phillies host the San Diego Padres in Game 3 of the MLB 2022 National League Championship Series Friday, October 21, at Citizens Bank Park in Philadelphia. The game will be live streamed on fuboTV.

Right-hander Joe Musgrove gets the start on the mound in Game 3 for the Padres, vs. left-hander Ranger Suarez for the Phillies. The best-of-7 series is tied 1-1 after beating San Diego beat Philadelphia 8-5 in Game 2 Wednesday.

The Padres vs. Phillies Game 3 starts at 6:37 p.m. Central (7:37 p.m. Eastern) and will be live streamed on fuboTV, which offers a 7-day free trial. Fox Sports 1 will broadcast the game nationally.

San Diego Padres pitcher Joe Musgrove is hoping to keep things quiet in his part of South Philly. To silence Bryce Harper, Kyle Schwarber and the Phillies, at least.

The sports complex home to three stadiums will be jammed Friday night with a Smashing Pumpkins concert at the Wells Fargo Center and Temple hosting Tulsa in college football at Lincoln Financial Field, both taking place at the same time as Game 3 of the NL Championship Series.

Musgrove starts for the Padres with the best-of-seven matchup tied at one game apiece.

Musgrove survived a TSA-worthy pat-down and tossed one-hit ball over seven shutout innings in an NL Wild Card Series win over the Mets and then pitched six strong innings to help beat the Dodgers in the NLCS.

Left-hander Ranger Suárez, who walked five in 3 1/3 innings in his Game 2 NLDS start at Atlanta, pitches for the Phillies.

Musgrove, who grew up rooting for the hometown Padres, said he’s mentally more prepared to handle the anticipation, nerves and pressure of the postseason more than 2017 when he pitched for the World Series champion Houston Astros.

“I’ve been beat down by the crowd, at times, in my postseason career,” Musgrove said Thursday. “I think ultimately, I’ve got a way better understanding of myself and how things work. Certain triggers that I have, and what it is that really gets to me and being able to have some awareness of what those things are before I got into a moment like this. It’s very helpful.”

It’s up to Suárez to disarm the Padres in front of a raucous home crowd. The Phillies are 2-0 at home this postseason and outscored Atlanta 17-4 in two home Division Series games; the Padres are 3-2 on the road.

“We feel pretty good being home here for the next three games in front of our own fans,” manager Rob Thomson said. “It’s going to be a lot of fun.”

Here’s what else to know about the MLB playoffs Friday:

At 0 for 23 and stuck in the longest hitless streak in major league history to begin a postseason, this isn’t the October slumping Houston star Jose Altuve pictured. Still, he’s a huge fan favorite at Minute Maid Park.

Before the ninth inning Thursday night in Game 2 of the ALCS against the Yankees, a man ran onto the field and asked the Astros second baseman to take a selfie with him.

“He kind of hugged me and said something like: ‘OK, we better win today, because I spent all my money on the ticket,’” Altuve said. “He pulled his phone from his pocket and tried to take a selfie, and I was ready to take it, but then security guys got there and did their job.”

A group of six security guards and police officers pulled the man away before he could shoot a picture with his cell phone. An Astros spokesperson confirmed to The Associated Press the man was arrested.

Altuve said he wasn’t alarmed when he spied the fan heading his way because the man was wearing the proper gear.

“I saw someone running and I said: ‘Astros jersey; I’m fine,’” Altuve said of the man’s white Craig Biggio shirt.

Astros manager Dusty Baker said he didn’t notice the fan on the field “until the crowd started going crazy.”

“I mean, what he did was wrong, but he looked harmless. It looked like he was doing it out of love and respect for Altuve. And I think Altuve handled it very well,” Baker said.

Houston leads the Yankees 2-0. The Astros planned to travel to New York on Friday and the series resumes Saturday at Yankee Stadium.

Bryce Harper and Manny Machado look to keep putting up big numbers when the Phillies host San Diego in Game 3 of the NLCS.

Harper is hammering away at .419 (13 for 31) with four home runs and four doubles for Philadelphia in this year’s postseason. He’s driven in seven runs and scored eight in eight combined games against St. Louis, Atlanta and the Padres.

Machado is batting .306 (11 for 36) with three home runs and three doubles against the Mets, Dodgers and Phils.

Both stars are looking to win the World Series for the first time. Harper, a two-time NL MVP, has never reached the Fall Classic. Machado lost in his only trip, with the Dodgers against Boston in 2017. The Inspection – What We Know So Far Latest News