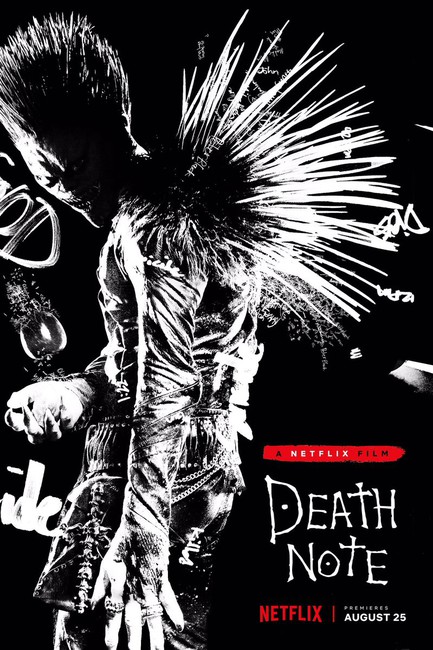 Entertainment news website Deadline reported on Thursday that Netflix‘s new live-action series of Tsugumi Ohba and Takeshi Obata‘s Death Note manga has hired Halia Abdel-Meguid (Miss Annity, The Devil in the White City) as a writer as well as executive producer. Deadline describes Abdel-Meguid as a “longtime fan” of Death Note, and a fluent Japanese speaker who lived in Tokyo before.

Matt Duffer and Ross Duffer (Stranger Things), also known as the Duffer Brothers, are developing the show at their new Upside Down production studio. Abdel-Meguid is a writing consultant on the studio’s adaptation of Stephen King and Peter Straub’s novel The Talisman. The planned Death Note series will be a “new take” from Netflix‘s previous live-action Death Note film (pictured right).

In Ohba and Obata’s original 2003-2006 supernatural suspense manga, teenager Light Yagami finds a notebook with which he can put people to death by writing their names. He begins a self-anointed crusade against the criminals of the world, and a cat-and-mouse game begins with the authorities and one idiosyncratic genius detective.

The live-action Death Note and Death Note: The Last Name films premiered in Japan in 2006 and were based on the story of the manga, albeit with significant changes to the story’s ending. The films starred Tatsuya Fujiwara as Light, Ken’ichi Matsuyama as L, Erika Toda as Misa Amane, and Shidou Nakamura as the voice of Ryuk. Viz Media screened the films in United States theaters in 2008, and released both on home video with an English dub.

A spinoff live-action film, L change the WorLd, debuted in Japan in 2008

The live-action Death Note Light up the NEW world film debuted in November 2016. The story takes place 10 years after the events of the original story, and features new characters who compete over six Death Notes on Earth.