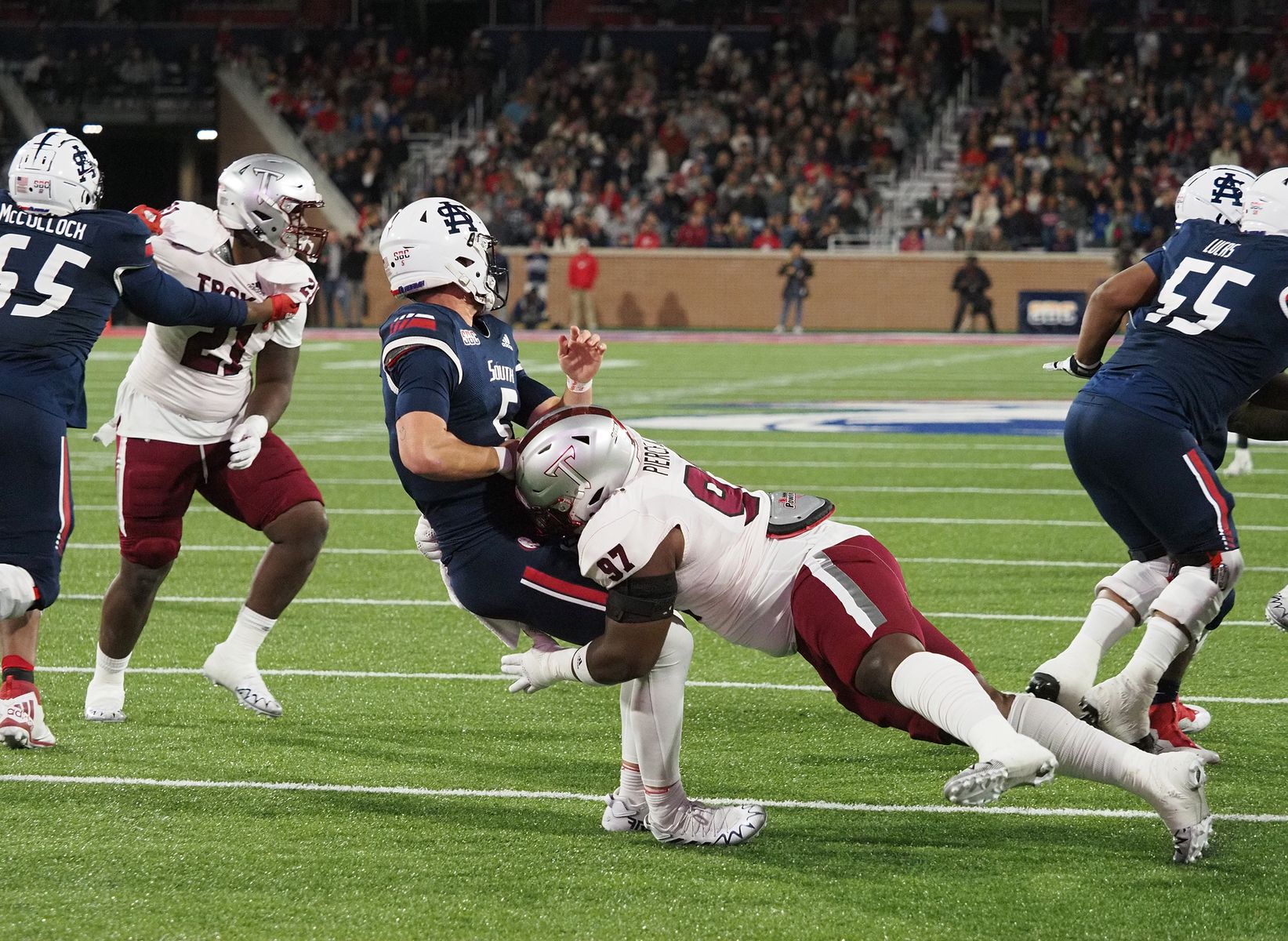 Troy won an ultra-physical “Battle for the Belt” on Thursday night at Hancock Whitney Stadium, beating South Alabama 10-6 for its fifth straight win in the series.

The Trojans (6-2, 4-1 Sun Belt Conference) were simply more physical than the Jaguars, running for 128 yards and limiting the Jaguars (5-2, 2-1) to just 31. DK Billingsley ran for 86 yards on 19 carries, scoring the game’s only touchdown on a 5-yard run in the second quarter.

South Alabama fell out of first place in the Sun Belt West, a spot now occupied by the Trojans. The Jaguars got into the red zone only once all night, and had to settle for Diego Guajardo’s 32-yard field goal that cut Troy’s lead to 7-6.

The Trojans then drove for Brooks Buce’s 50-yard field goal with 7:35 left, which set the final score.

South Alabama had two opportunities at first-and-goal in the first half, but both plays were called back.

Carter Bradley hit Brandon Crum for 30 yards to the Troy 4, but a holding call wiped out the big gain. The Jaguars eventually had to punt.

Then late in the half, Bradley found Devin Voisin for 41 yards to the Troy 4, but replay overturned the play after it was ruled Voisin juggled the ball as he hit the ground. South Alabama eventually had to settle for Guajardo’s 41-yard field goal to make it 7-3 at halftime.

South Alabama also drove to the Troy 41 in the third quarter, but threw three straight incompletions and punted.

Troy wins at line in first half

The Trojans’ offensive and defensive lines handled things for the most part in the first half, running the ball with authority on offense and pressuring the Jaguars on defense.

Troy ran the ball on seven of 10 plays on their touchdown drive, with Billingsley and Kimani Vidal both breaking off big gains. Billingsley ran in from 5 yards out on the first play of the second quarter to put the Trojans on the board first.

However, it was a fourth-down pass that was the key to the drive. Jarret Doege hit Tez Johnson for 15 yards to the USA 16 on fourth-and-2 from the 31, and Billingsley did the rest.

Running back La’Damian Webb, linebacker Quentin Wilfawn and guard Dontae Lucas all played extensively after missing recent time due to injury. Lucas started at left guard, while Webb and Wilfawn were in early and often with their respective units.

Webb ran for just 12 yards on eight carries, and did not look as explosive as he was before being injured last week vs. Louisiana-Monroe.

Johnson also played for Troy after leaving last week’s game vs. Texas State due to injury. He caught four passes for 56 yards.

Doege starts for Troy, but pulled in third quarter

Jarret Doege started at quarterback for the Trojans ahead of Gunnar Watson, who has been banged up in recent weeks. Doege didn’t go the distance, however, as he was pulled in favor of Watson late in the third quarter.

Doege completed 10 of 15 passes for 84 yards and an interception. Watson was 4-for-4 for 54 yards, but mostly handed off the ball to run out the clock late.

Next up: South Alabama travels to Arkansas State on Oct. 29 for a 3 p.m. kickoff on ESPNU. Troy has an open date before traveling to Louisiana on Nov. 5.