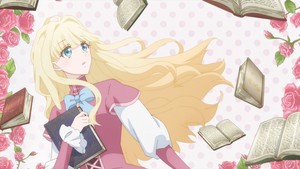 You could be forgiven for assuming that there’s nothing more to Lady Elianna Bernstein than books. In fact, the first episode of Bibliophile Princess seems to go out of its way to push that narrative—most of what we see is Eli in the library or just sitting with her beloved tomes. For source novel readers, that could seem like an odd choice to make, given that the original story was narrated by Eli in the first person, but I think it does help to make the second episode more striking. By opening with a strictly bookish Elianna, we see how she views the world: through the pages of a book, which she then processes and uses to inform her knowledge of the world around her. That’s not what anyone expects of her, both as the prince’s fiancée and as a noble lady, so by keeping us mostly in the dark about everything outside of herself, the show is demonstrating how Lady Irene managed to get the idea that Eli would be an easily replaced doormat.

It’s also kind of fun to see Irene acting out something that we’re all so familiar with from the sort of book Bibliophile Princess comes from: a light novel. Eli’s world is loosely based on 18th or 19th century Europe, so of all the many volumes she’s got available to read, there’s not likely to be a light novel among them, much less a villainess-based one. Therefore she has no reason to recognize what’s obvious to us—that Irene is working precisely from the villainess playbook, from the framing of the heroine to trying to cozy up to the love interest. Sure, we see some similar antics from characters like Caroline Bingley (of Pride and Prejudice fame), but Irene’s much less her and more game-original Aileen Autriche, and that’s something Eli isn’t likely to recognize.

Luckily for her, Christopher has apparently spent the last eight years busily thinking about how he could secure Elianna’s hand in marriage. That’s where episode three comes in: he recounts his long-standing love for her, only to be horribly reminded that she only fell for him much more recently. But painful as that might be for him, it shows Eli (and us) that he’s been serious about her from the start. That means that while Eli was busy misinterpreting his careful proposal that would allow her to continue her biblio-centric lifestyle as just him putting on a show, what he was actually doing was trying really hard to show her that he loves and respects her for who she is and that he doesn’t need her to change. When he offers to let her read in his office, he’s giving her a safe and comfortable way to get used to him and his aides, and when he tells her that she doesn’t have to strain herself to attend functions, he’s telling her that he understands what she isn’t comfortable with. It’s really romantic and sweet when you look at it that way, and it frames their relationship as one of mutual love and respect.

These three episodes really do function best as a unit. They build on each other very well, creating a fuller picture of Chris and Eli and their relationship than any one of the three does alone. While it’s perhaps not great that the guys are all actively keeping information from Elianna, she also doesn’t seem particularly interested in what’s being withheld. We also don’t get quite as full a picture of the depth of her knowledge as I would have liked (a result of the shift from first to third-person narration), but the hints about how she likes to read both primary and secondary sources on a given topic does give us an idea of the breadth of her reading. And as someone who more or less sits perfectly still while reading, I think that her static reading poses are fine, albeit not visually interesting.

Bibliophile Princess‘ original novels’ demographic skews more josei, and I do think we see that in the pacing here—there’s no rush to move the plot at a fast clip, but instead a trust that the viewer will follow the slower story. That may not work for everyone, but so far I’m happy with how this is turning out.