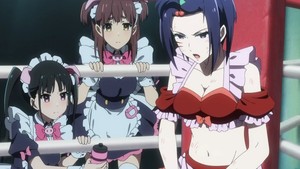 Subversion, as a writing device, can’t support a story all on its own. You can hook an audience with a big twist, a shocking surprise early on, but without any substance after that, it’s hard for the audience to stick around. From its very first trailer, Akiba Maid War is made clear to us that we could expect some subversive swerve from the forward-facing maid-café visuals. That turned out to be an even more appropriate meta-spin than we might have thought, since the twist is not a twist so much as it is the premise. Here, the maid cafés of its vision of late-90s Akihabara are fronts for organized criminal activity. It’s as if someone watched the Roberta-focused episodes of Black Lagoon and (correctly) surmised “We could make a whole show out of this.” As a huge fan of both Black Lagoon and stupidly-confident/confidently-stupid anime premises, I could not be happier with the result.

That confidence is the major driving factor behind Akiba Maid War‘s success; it has an absolutely serious, stone-faced commitment to The Bit. The premise seemingly originates out of simple wordplay, with the Maid or ‘Meido’ in the title also being read as “Underworld.” And so it plays the gritty 90s crime thriller straight, just with every instance of the Yakuza replaced with maids, complete with them keeping up cutesy puns in their dialogue even as they’re having shootouts and lobbing grenades at each other. It means the sheer dissonance can serve as the joke itself, while the actual narrative structure of the show still gets to have legs. The crime genre itself provides plenty of opportunity for a strong variety of plots, as opposed to trying to wring a whole season’s worth of entertainment out of this pony’s one particular trick.

Some of the dissonance is a little questionable, of course. The existence of Akihabara’s network of otaku-catering businesses as a vast criminal underground seems widely accepted in this universe’s twisted vision, with civilians on the street avoiding the waitstaff on the streets out of fear, or newscasters reporting on overnight maid café brawls as if they were regular updates on gang violence. Yet newcomer characters like Nagomi or the third episode’s Zoya have character arcs specifically centered on them not being aware of the true nature of the maid business until they joined it. It’s all at behest of selling that central joke, of course, that even after we see a maid matron gunned down in the first episode’s opening, we still ride along with Nagomi’s shock when a bunny girl in front of her catches a bullet between the eyes and sprays blood all over her apron (complete with an adorable tweety sound effect, because the people behind Akiba Maid War are actual geniuses).

It’s not one joke, it’s a whole universe of jokes. That kind of subversion is Akiba Maid War‘s bread and butter (or omurice and ketchup) even after the pig is out of the proverbial poke. The trailer also treated us to things like a shot of the Oinky-Doink Café’s Chief making herself look like a badass outside with a momentary smoke break, but in the context of the second episode, Chief has fully cemented herself as an absolutely ineffectual loser at trying to navigate this frilly underworld. Yumechi spends the same episode seemingly showing her prowess at underground gambling, before she absolutely beefs her attempt at a Jotaro-Kujo-style bluff and they have to end things with a shootout anyway. The driving theme of the third episode is the question of whether Ranko can be considered “cute,” despite the fact that every one of us fell in love with this 35-year-old murder maid from the beginning of the first episode.

The narrative reasons that Rako is cute because of the feeling with which she accepts Nagomi’s gifts of hair ties: Sincerity. This sentiment is reflected throughout the entire show. Even with the cutesy coat of paint as a gimmick, Akiba Maid War knows it can’t just coast with its crime-thriller concept. There are still actual, effective twists and turns powering the plots of each episode, particularly the third one, which involves multiple mob boss betrayals and incidents involving counterfeit anime girl figurines. It delivers all that while setting the scene for Zoya joining of the Oinky-Doink crew (the opening theme gamely trying to hide her recruitment by obscuring her face for these first few episodes). This subplot shines despite competing for space with the frankly galaxy-brain episode concept of “Maid Fight Club.” It’s an absolute iceberg of entertainment levels, all the way down to an avalanche of Ashita no Joe allusions, complete with lovingly rendered postcard memories. And the fights themselves are all nicely animated to boot!

From the first reveal of its foretold twist, Akiba Maid War made clear that this was a concept that could sustain itself. The Sopranos but acted out by the staff of a Chuck E. Cheese would still have the engaging plot of The Sopranos, now with the possibility of animal-themed puns or outlandish musical numbers. I’m really hoping we continue to get things on the same level as the wota-choreographed musical gunfight of the first episode that was such a jaw-dropping highlight. The third episode approaches that, with hair-tie-hinging debates on the merits of cuteness between two cross-countering MMAids, and Zoya’s full-time addition to the staff foretells potentially more of that kind of mayhem. But I also recognize the possibility for a genuine ongoing plot, as we uncover what might be Ranko’s quest for revenge after what she witnessed in the show’s cold opening. It means we could be in for a full season of a rock-solid thriller that also features cute maids and stupid animal jokes. It’s great to have these maids welcoming me, as truly, that feels like I’ve come home.