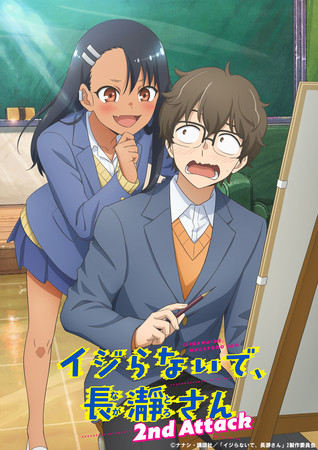 The new season will premiere in January 2023, and will feature a returning main cast.

Shinji Ushiro (Yōkai Watch) is directing the anime at OLM. Taku Kishimoto (ERASED, 2019’s Fruits Basket, Haikyu!!) is returning to supervise the series scripts. Misaki Suzuki (sub-character designs on Lupin the Third: Part 5, Tari Tari) is returning to design the characters, and Gin (Busted Rose) from Pop Team Epic and Why the Hell are You Here, Teacher!? is again composing the music.

Kodansha USA Publishing releases the manga in English, and it describes the romantic comedy story:

Nagatoro is a freshman in high school who loves teasing and torturing her older male classmate! What’s her motivation and why does Senpai put up with her? Does Nagatoro just want to create misery for Senpai? Or maybe she secretly likes him?

Hirokazu Hanai (Dances with the Dragons) directed the first season at Telecom Animation Film. The first anime season premiered in April 2021. Crunchyroll streamed the season as it aired in Japan.