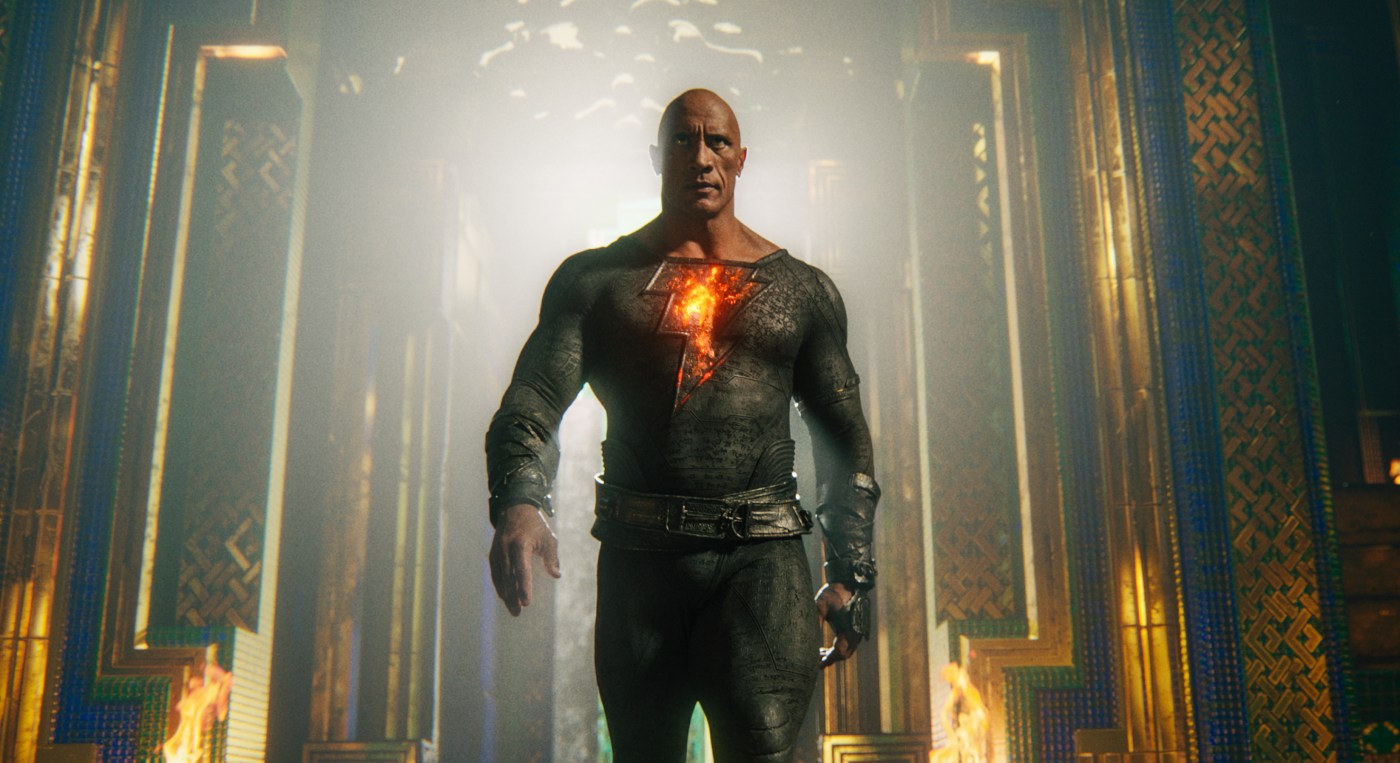 Do we really need another superhero movie without a heart? “Black Adam,” Warner Bros.’s attempt to jump start its DC franchise yet again, fails primarily because the studio bosses insisted on hiring Jaume Collet-Serra of “Jungle Cruise,” “Unknown,” “Orphan” and “House of Wax” fame, to direct it.

Featuring Dwayne Johnson as the larger-than-life anti-hero title character is a no-brainer, right? An origin tale, “Black Adam” begins 5,000 years ago in a mythical city-kingdom (in the original comic, it was Egypt) of Kahndaq. Teth-Adam (Johnson) is one of an oppressed people. He is a slave who tries to protect his wife and son. His King seeks power using “dark magic” and the crystal known as “Eternium” to forge the “demon-infused” “Crown of Sabbac.” It all sounds much like a comic book rehash of Moses.

Cut to present day. A freedom fighter/scholar named Adrianna Tomaz (Sarah Shahi) wants to free her people from the rule of mercenary “intergangs.” She and her cohorts, including her over-sized brother Karim (Palestinian-American comic Mohammed Amer) seek the Crown of Sabbac in a labyrinthine cave outside Kahndaq. Speaking the word “Shazam,” Sarah accidentally unleashes the now super-powerful Teth-Adam, a “champion” who battles an intergang crew, hideously burning one of them alive, ripping others apart and throwing several of them into the sky to die on the rocky terrain where they land. This is not kiddie stuff.

If you’re thinking this is also no ordinary DC superhero, you’re right. The Justice Society, comprising Hawkman aka Carter Hall (Aldis Hodge, “One Night in Miami”), Doctor Fate aka Kent Nelson (Pierce Brosnan), Cyclone aka Maxine Hunkel (Quintessa Swindell, “Voyagers”) and Atom Smasher aka Al Rothstein (Noah Centineo, “Charlie’s Angels”), is dispatched in their high-tech super-jet to corral this raging superhero. But why are Western outsiders coming to Kahndaq to battle a native son?

It’s all very complicated and not very interesting. The point is to fire up the green screens and gratuitous CG machine and get superheros with different superpowers to battle bad guys with guns (pointless, I know) and each other (tedious at best). Sarah has a rebellious skateboarder son named Amon (Bodhi Sabongui) who plays a game of hide and seek with the bad guys for the Crown of Sabbac. The people of Kahndaq don’t seem to notice that Teth-Adam, who can hover in the air, fire bolts of energy, withstand bullets and bombs and has super-strength, and his adversaries are systematically destroying the city (“Black Adam” was shot in Atlanta). Lorne Balfe (“Top Gun: Maverick”) provides the canned superhero-movie music. A running joke regarding Black Adam’s “catchphrase” was lost on me. I also did not care why Black Adam is called Teth-Adam and does not get his “real” name until the end. These were all fan service devices.

Former Bond Brosnan and Hodge have chemistry as superhero buddies. Swindell and Centineo are here because the other “superheros” aren’t getting any younger. Using a clip from Sergio Leone’s “The Good, the Bad and the Ugly” (1966) and an excerpt of music by Ennio Morricone was not a good idea, since anyone in their right mind would prefer to watch that. Johnson’s acting superpower here is his smirk. There is a lot of talk about sarcasm. That’s my superpower. The omnipresent Viola Davis of the current “The Woman King” appears in a cameo as “Suicide Squad” director Amanda Waller. Like my reaction to “Black Adam,” all I could wonder is, “Why?”