While Japanese game creators have been fairly open about their anime and manga inspirations for decades, it’s only more recently that Western developers have started to catch on. In particular, it’s those in the indie space that have been showing their love for the medium the most, and that’s never been more obvious than it has in 2022. The developers behind multiple critically-acclaimed indie titles have talked fondly of watching anime in their formative years and how they have integrated those inspirations into their new games.

What’s clear is that the term “anime game” could be much broader. Just because something has anime-style character designs doesn’t necessarily mean that the game itself has those inspirations. Likewise, a game doesn’t necessarily need to look like anime to have been inspired by the medium. 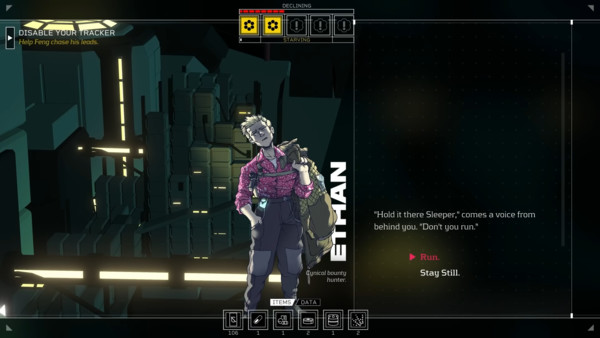 Citizen Sleeper serves as both an homage to the TTRPG genre and an exploration of our precarious modern lives. Progressing through the game means a lot of reading, but creator Gareth Damian Martin’s emotive descriptions are addictive. As you might expect for a game about a human consciousness in an android body, it takes a lot of aesthetic and narrative inspiration from cyberpunk mainstays like Blade Runner and Ghost in the Shell. But Citizen Sleeper‘s focus on the freelancer lifestyle also drew its creator towards Cowboy Bebop.

Martin describes the crew of the Bebop as being “a bunch of freelancers who are flatmates in space,” and in the leadup to the game’s announcement and subsequent release, they filled their timeline with gifs of the crew just hanging out. “In exactly one week you will understand why these tweets have bebop gifs,” tweeted Martin before Citizen Sleeper’s E3 announcement. Like Cowboy Bebop, the game doesn’t feature larger-than-life heroes or blemishless paragons. It’s a game about people struggling with their past and trying to find a path in a world where the future constantly feels precarious and uncertain. Also like Cowboy Bebop, Citizen Sleeper is a story that’s hard to stop thinking about. 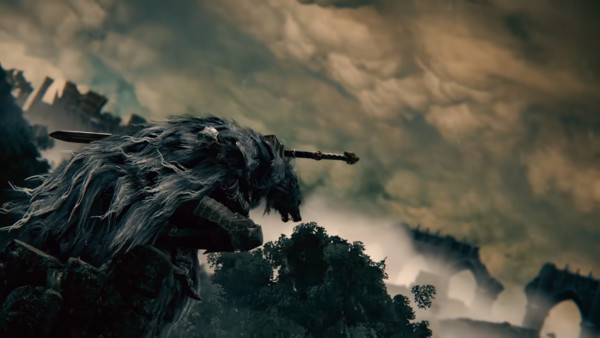 For fans of Berserk, Elden Ring‘s references are beyond explicit. While developer FromSoftware isn’t known for doing a lot of press, their love for the works of Kentaro Miura isn’t really something that needs confirmation. Even as early as the June 2021 gameplay reveal, we were introduced to a clip of a howling Blaidd that looks uncannily similar to Guts’ famous Berserker Armor pose as shown on the cover of volume 28. Elden Ring features many homages to Kentaro Miura’s work that range from the obscure to the obvious. Guts’s Dragon Slayer sword can even be found in Caelid, complete with flavor text that matches the sword’s description in the manga.

None of this is new for FromSoftware. That greatsword appears throughout the Dark Souls series as well, and fans have been picking apart the similarities for years. But the inspiration Elden Ring takes from Berserk’s themes and atmosphere nevertheless deserves mention. Much like our own journeys through the Lands Between, Guts’ adventures are both lonely and brutal as he takes on increasingly terrifying foes, and for many in Japan, this was their introduction to dark fantasy as a genre. There have been countless attempts at creating a spiritual successor, but even today, Berserk remains the definitive dark fantasy manga. Before his untimely death, Miura had been writing Berserk for over 30 years, and thanks to its endurance, it has become a formative experience for generations of readers, including many of Elden Ring‘s creators. 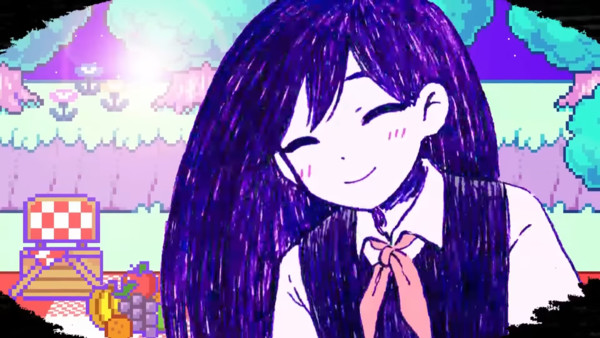 Technically, the Kickstarted RPG Omori released in 2020, but it only got a console release as of this year. While the game made headlines as a love letter to the Earthbound series of games, its inspirations and references span far beyond just that. Along with RPG Maker games like Yume Nikki and JRPG franchises like Final Fantasy and Kingdom Hearts, the creators also took notes from a broad variety of anime and manga. In a translated interview they had with the Twitch streamer Cydonia, the game’s director/writer/programmer/designer/artist/etc. Omocat mentioned both Fullmetal Alchemist and Oyasumi Punpun as inspirations, but anime in general is a key part of their growth as an artist and creator. As they said in a 2014 interview for Tokyo Journal, “Anime is of my generation really. I guess I was destined to be hooked. My work can be quite nostalgic. I like to mix anime with my life experiences.”

Omori is full of small shoutouts to otaku culture. A grave in the game will quietly play a track from Clannad, you can get an achievement named “See You, Space Husband” after defeating a boss, and a character gives you a four-of-a-kind dragon (a Yu-Gi-Oh! reference) “Rare Card” for completing a side quest. Omori speaks to the love Omocat has for Japanese otaku culture in general. 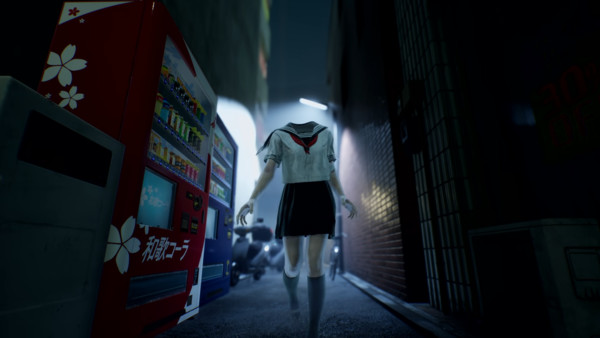 Ghostwire: Tokyo may not have reached the high critical acclaim that Omori and Elden Ring did, but for those interested in Japanese mythology or the Tokyo nightscape, it’s a must-play. In the main story, you play as Akito on a journey to save his sister (and everyone else in Tokyo on the way) while fighting creatures called “Visitors”. However, the real appeal of the game is in its side quests that have you interacting with and solving problems caused by mischievous yokai. While yokai are an integral part of Japanese urban legends, the way in which most Japanese kids and teens are exposed to these spirits is through popular culture. More recently, that’s included the Yo-kai Watch video games and anime as well as the fiercely popular Natsume’s Book of Friends.

However, the most successful introduction to yokai and their myths is GeGeGe no Kitarō, one of the primary inspirations for Ghostwire: Tokyo. Kitaro has been Toei Animation‘s most persistent franchise, having been adapted into seven different anime series across the last 54 years and will be getting a brand new film next year. Ghostwire’s director Kenji Kimura refers to it as an anime “that was on TV all the time” and credits it with the popularization of the idea that yokai could exist around us unseen. In this sense, it’s a game that could have only been made in Japan by people who grew up with Kitaro and the media it inspired. Given the same task, an overseas developer might have focused on the actual scrolls and historical legends that yokai originated from, but that would have run the risk of divorcing the game from the way people in Japan understand yokai today. 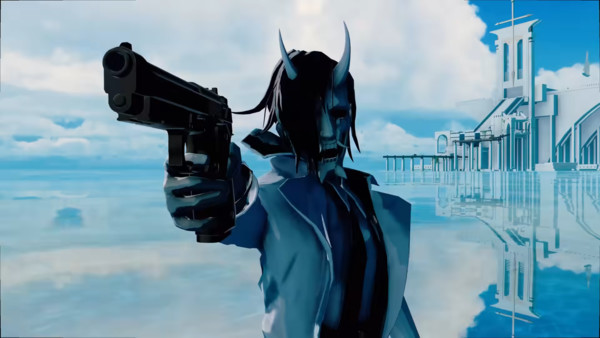 Neon White is dripping in anime references, even when you can’t spot them. In a tweet, the team revealed that many of the game’s locations, UI, and character poses were inspired by specific anime key visuals from shows like Cowboy Bebop and Fullmetal Alchemist. At the same time, they hired Studio Yotta, a crew of animators who’ve worked on anime before, to create an animated opening for the game which is filled with many of its own stylistic references. From the musicians to the designers to the artists, the developers were fueled by a love for this one particular decade of anime subculture. 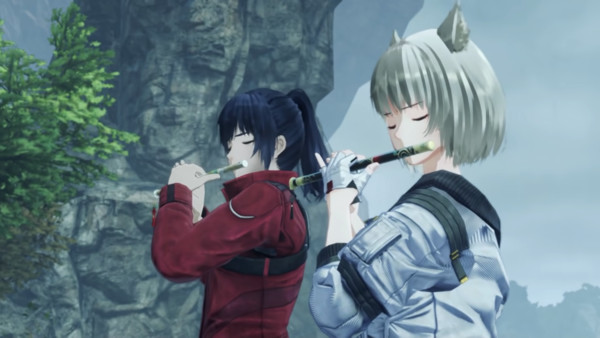 Xenoblade Chronicles 3‘s inspirations are somewhat different from the other entries on this list. While the team absolutely has taken inspiration from specific anime series—director Tetsuya Takahashi’s Mobile Suit Gundam obsession is alive and well—what makes Xenoblade special is the number of its developers who have worked on anime in the past.

In fact, Monolith has a long history of working with anime creators. Back when the studio’s founders were still at Square, they worked with director Kōichi Mashimo and his team at Bee Train for Xenogears’ cutscenes. Later, the team oversaw the creation of Xenosaga: The Animation at Toei Animation where they met its scenario writer Yuichiro Takeda. After they’d wrapped on the series, Takeda was invited to become a games writer, starting with the Nintendo DS retelling of the first two games before being hired to write for the Xenoblade series. Before his Monolith Soft work, Takeda was known for his sci-fi and mecha scripts, making him the perfect addition to the team. Likewise, Tetsuya Takahashi later hired Kazuho Hyodo, the assistant lead screenwriter of Mobile Suit Gundam AGE (and more recently lead screenwriter of TONIKAWA: Over The Moon For You), to co-write Xenoblade Chronicles X and every game henceforth. The result is that Xenoblade Chronicles 3 is written by two anime screenwriters and overseen by a hardcore anime fan.

However, it’s not just that anime creators were in the script room. While the CG animation company Graphinica had worked with Monolith in the past on both the Xenoblade series and The Legend of Zelda: Breath of the Wild, the studio started going all-in on anime production during the last 5 years. This means that most of the Xenoblade 3 cutscene staff now have anime credits under their belt from shows like Juni Taisen: Zodiac War, Muv-Luv Alternative, and Rascal Does Not Dream of a Dreaming Girl. In fact, the game’s cutscene chief animation director Shinichi Miyakaze was also the 3D animation director for both SSSS.Gridman and SSSS.Dynazenon as well as the upcoming Mobile Suit Gundam: The Witch From Mercury.

Basically, when people say that Xenoblade 3 is incredibly anime, they have a point. 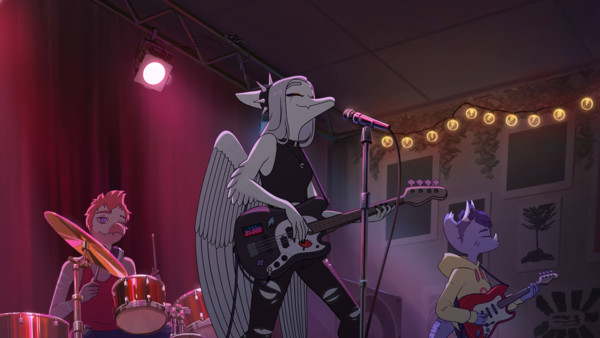 It can sometimes be difficult to parse what a developer means when they say that their game is “anime-inspired”. According to industry insider Jeff Grubb, the next Need for Speed game will have a photorealistic style but with “anime elements”. The upcoming Goodbye Volcano High describes itself as being an “interactive anime”. It’s difficult to tell what these descriptors actually mean. Are they like Elden Ring in their love for a specific series? Do they have anime creators involved like with Xenoblade Chronicles 3? Or are they evoking a specific vibe that we connect with anime like with Neon White?

To be cynical about it, “anime” can be somewhat of a buzzword. It’s the most popular form of animation today and it represents a huge investment for mega-corporations like Sony and Netflix. Using it in marketing is a way of quickly establishing a target audience. But from a more optimistic standpoint, the mainstream popularity of anime means that creators both within and outside of Japan can be open about their love for the medium. Scarlet Nexus can get a simultaneous global release with a huge Xbox marketing deal. The anime-inspired Eternights can have its reveal during a PlayStation State of Play alongside Spider-Man and Resident Evil. The idea that anime-inspired works were too niche to be worth funding is long over. Overall, for anime fans, it feels like a net positive.