The new Urusei Yatsura anime announced on Thursday that it is teaming up with the Onitsuka Tiger shoe brand—a multilayered collaboration given that Lum is an Oni from an alien planet and wears a tiger-striped bikini. To commemorate the occasion Onitsuka Tiger is releasing new merchandise, including a very limited stock of tiger-striped shoes.

The company also began streaming a short animated video set in the Urusei Yatsura world, produced by david production. Ataru and Lum are shown shopping in the futuristic “Neo Shibuya.” They enter the real-life Onitsuka Tiger store, where antics ensue.

The collaboration also extends to the TV anime itself. In episode 1, Ataru is shown wearing Onitsuka Tiger’s “Mexico 66” shoes, and in the upcoming episode 3, Lum will wear the “Delicity” tiger-striped shoes, as depicted in the collab visual below: 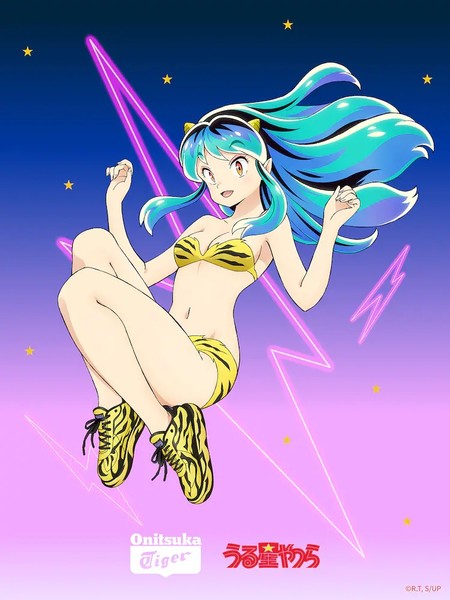 In the real world, only 700 “Delicity” shoes will be sold across 15 countries starting from October 29. You can purchase it from Onitsuka Tiger’s e-commerce store or from physical store branches. Other collab items include a sweatshirt and tote bag, although these will be sold exclusively in Japan.

Inspired by the Neo Shibuya setting in the anime add, the shoe brand will open a pop-up store in Shibuya from October 29 to November 6. The store will exhibit art materials related to the collab.