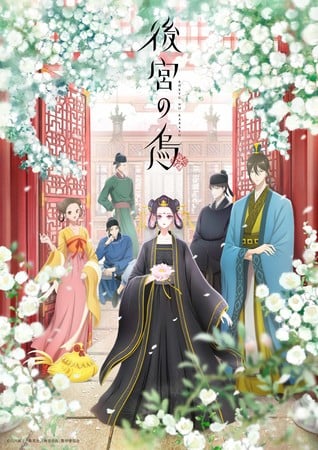 Crunchyroll announced on Thursday that it will begin streaming the English dub of the television anime of Kōko Shirakawa‘s Raven of the Inner Palace (Kōkyū no Karasu) novel series on Saturday.

The anime premiered on October 1. Crunchyroll is streaming the series as it airs in Japan.

The novels’ story centers on Uki, an imperial concubine who has never been called to the emperor’s bedchambers, and maintains a singularly unique life within the harem chambers. Seen by some as having the appearance of an old woman, and some others as a young lady, she is known to use mysterious magic that helps with everything from finding lost items to inflicting curses. When a circumstance makes the emperor call on her, their meeting will change history.

Shirakawa launched the novel series with illustrations by Ayuko (The Earl & the Fairy) in April 2018. The seventh and final volume shipped on April 21.

Seven Seas Entertainment announced at Anime Expo 2022 that it will release the novel series in English next year.