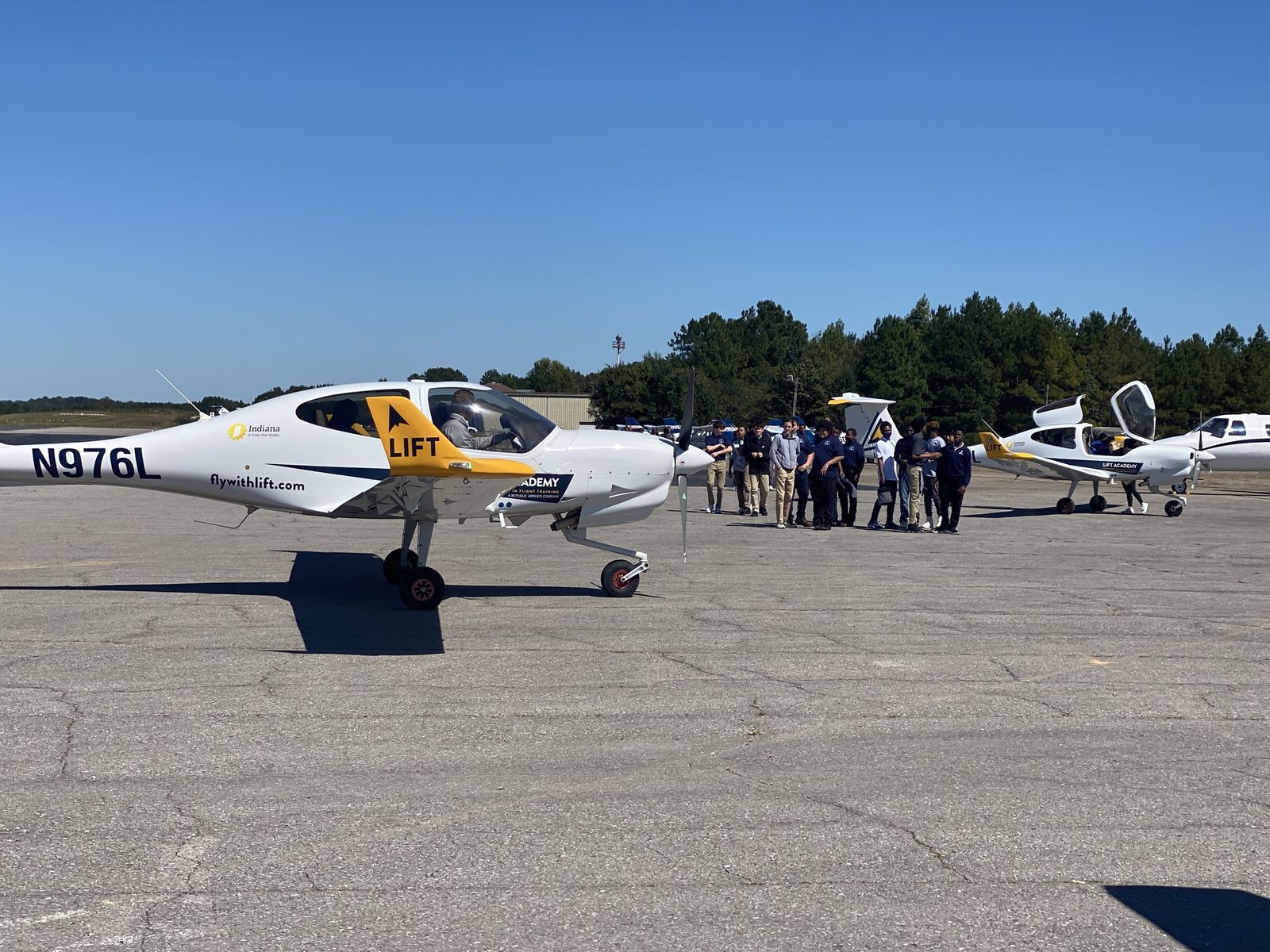 A handful of small airplanes line the runway on windy day at Bessemer Airport and if you look through the windows you’ll see high schoolers in the cockpit. For students like Finn Payne, it’s their first time ever in a plane.

“Since I’ve joined this school, we’re only four weeks in and I’m already out here getting ready to pilot a plane,” the sophomore said.

Finn and about 150 teens are a part of the first class of students from all over the country at the new Alabama Aerospace and Aviation High School. The public charter school’s mission is to prepare more underrepresented students for careers in aviation and aerospace and the first step is getting students in the air.

So, a month into the school year the school held a fly-in event for students to get the chance to co-pilot a small plane. Ninth grader Dorian Gonzalez said he already has plans to fly for the Air Force.

“In my 14 years of living, I’ve only been on a plane twice,” Dorian said. “It really is difficult to comprehend for the first time that you’re actually up there. You’re about a thousand feet up in the air, going out about 60 knots and just it’s really mind blowing what you can do.”

The 100-year-old high school building is set up like an airport where the classrooms are gates and the halls are terminals. The school colors are fittingly sky-blue and the curriculum is also supported by Delta Airlines Tech Ops, Auburn University and Tuskegee University. Founder Ruben Morris said every detail in the school is to prepare students for future jobs in aviation and aerospace.

“There will be 23,000 pilot openings globally in 2023, and that’s only going to exponentially increase,” Morris said, ” So the timing is now because of the need across the industry, but also the opportunity from an education standpoint.”

Morris said he wants the school to quote “disrupt” the industry by giving marginalized students the tools to succeed and to diversify the cockpit. He said that goal is shared by their local and national partners and that’s because of two issues facing the aviation industry.

Since the pandemic began, the industry is down two million workers and those who remain are overwhelmingly white.

According to a 2020 survey by the U.S. Bureau of Labor Statistics, about 94% of the country’s aviation professionals are white.

“I did not meet a pilot of color until I was over 30 years old,” Morris said. “I have still yet to meet a black female pilot in person. We’ve got to change that.”

At the Alabama Aerospace and Aviation High School, the majority of students are students of color and over 70% qualify for free and reduced lunch. Morris said preparing students for jobs also helps those students build up wealth in the community after graduation.

“This is what I would describe as a generational impact,” he said. “And what I mean by that is that you can’t be what you don’t see.”

At the fly-in, Tamara Canty looked on as the students got into planes in awe. She has a son in 9th grade, but she was excited to talk to some of the girls.

“I thought that it was so awesome to see our young brown girls,” Canty said. “That they can see themselves doing that. That’s the impact that a day like this has on them. To get in a plane and actually fly and put their hands on the instrument panel is priceless.”

By graduation, students can earn a private pilot’s license and start careers with certifications in aircraft maintenance and engineering. Students say they already have plans to fly for the Air Force or for commercial airlines.

The school’s motto is “SOAR”, standing for scholarship, optimism, accountability and respect. Founder Ruben Morris said these values are the foundation for all learning and activities, so students can keep flying high.

Kyra Miles is a Report for America corps member covering education or WBHM.

This story was produced with assistance from the Public Media Journalists Association Editor Corps funded by the Corporation for Public Broadcasting, a private corporation funded by the American people.