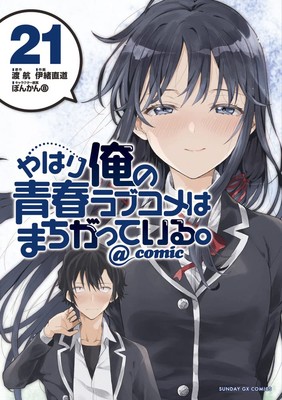 Yen Press licensed both the novel series and the manga for English publication in 2015. The publisher describes the story:

Hachiman Hikigaya is a cynic. “Youth” is a crock, he believes–a sucker’s game, an illusion woven from failure and hypocrisy. But when he turns in an essay for a school assignment espousing this view, he’s sentenced to work in the Service Club, an organization dedicated to helping students with problems in their lives! How will Hachiman the Cynic cope with a job that requires–gasp!–optimism?

A separate manga adaptation by Rechi Kazuki, titled Yahari Ore no Seishun Love Come wa Machigatteiru. -Monologue- manga, launched in Square Enix‘s Monthly Big Gangan magazine in September 2012, and is ongoing. While Io’s manga is directly based on the light novel series, Kazuki’s manga is based on the events of the anime, containing all the differences the anime has from the light novel story.

Watari began the original light novels with illustrations by Ponkan8 in Japan in 2011. The series’ final arc began with the 12th volume, which shipped in September 2017. The 14th volume ended the novel series’ main story, and shipped in Japan in November 2019. The novels also received a series of short story collections titled Yahari Ore no Seishun Love Come wa Machigatteiru. Shin, a new volume of which shipped with each of the six Blu-ray Disc volumes of the anime’s third season from September 2020 to March 26. The short stories are set on the day immediately after the ending in the 14th volume. Watari also wrote a more recent “volume 14.5” for the series, which shipped in April 2021,and tells the story of Komachi and Iroha, the new generation of the Service Club. A new novel volume titled Yahari Ore no Seishun Love Come wa Machigatteiru. Yui (My Youth Romantic Comedy Is Wrong, As I Expected. Connection) shipped in September 2021, and was initially announced as the first volume of a new series.

My Teen Romantic Comedy SNAFU Climax (Yahari Ore no Seishun Love Come wa Machigatteiru. Kan), the third television anime season based on the novels, premiered in July 2020 and aired for 12 episodes. Sentai Filmworks licensed the series for release outside Asia, and streamed it on HIDIVE and Crunchyroll. HIDIVE began streaming an English dub for the series in August 2020.

Source: My Youth Romantic Comedy Is Wrong, As I Expected @ comic volume 21