This year’s 22nd issue of Hakusensha‘s Hana to Yume magazine revealed on Thursday that Julietta Suzuki will launch a new manga titled Oshi ni Amagami (A Nibble for my Fav) in the magazine’s next issue on November 5. The manga will have a color opening page, and will feature in the issue’s front cover. The first chapter will have 48 pages. The magazine teases the manga as a “bloody romantic comedy” centering on an anime otaku vampire and her sharp-tongued neighbor. 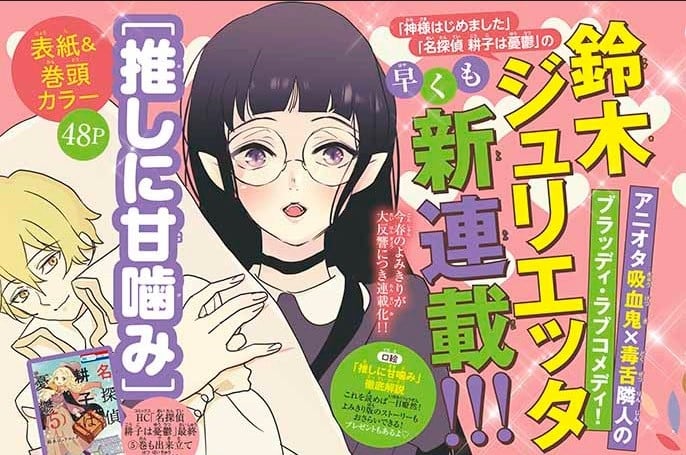 The manga is a serialization of a one-shot with the same title that Suzuki published in Hana to Yume on April 20 earlier this year. That one-shot centered on a vampire named Hina, who has been a shut-in for 30 years, and who gets hooked on hot anime guy characters.

Suzuki recently ended the Meitantei Kо̄ko wa Yūutsu (Detective Kо̄ko Is Melancholy) manga on June 3. Suzuki published a one-shot for the manga in Hana to Yume January 2020, before serializing it in the magazine in September 2020.

Suzuki launched the Kamisama Kiss manga in Hana to Yume in 2008, and ended the series in May 2016 with 25 volumes. Viz Media has published the manga in English.

Kamisama Kiss inspired two anime seasons. Funimation streamed both seasons as they aired in Japan, and also released both seasons on home video. The manga also inspired a series of four original anime DVDs (OADs) that shipped with the manga’s 22nd through 25th compiled volumes. A “volume 25.5,” an official fanbook, shipped in December 2016. The fanbook bundled a DVD with an original anime and a 32-page epilogue manga.