How would you rate episode 1 of
Chainsaw Man ?

How would you rate episode 2 of
Chainsaw Man ? 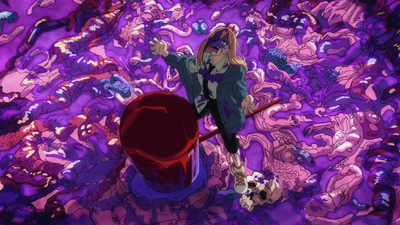 To truly understand Chainsaw Man, I think you’ve got to understand the toast. More than the fountains of meticulously animated gore and viscera; more than the source material’s acute blend of horror, sophomoric humor, and reverence for film-nerd minutae; more than the deeply carnal pleasure of hearing our titular hero’s chainsaws go “Brrrrrrrrrrrrr-vrooooom!!!!”; more than even the absolute perfection of Our Lady Power. The secret sauce of Chainsaw Man is hardly a secret at all—it’s slathered all over a single piece of thick-ass bread that our boy Denji devours without even a modicum of shame or conscientiousness. The truth of Chainsaw Man is in the toast.

(Well, I’m sure Denji would argue that it’s in toast and boobies, but let’s not get ahead of ourselves, eh?)

As someone who has read Tatsuki Fujimoto‘s magnum opus (magnum oppai-us?), I have been just as eagerly awaiting MAPPA‘s go-for-broke adaptation of Chainsaw Man as any fan, and the short version of this review is that, at least in these first two episodes, the mad lads and lasses have not disappointed us yet. While the studio’s signature blend of feature film-worthy hand-drawn animation and well-integrated CGI doesn’t exactly capture the starkest qualities of Fujimoto’s charmingly roughshod black-and-white art, the production makes up for it with a legitimately obscene attention to depth and detail. At its best, MAPPA‘s Chainsaw Man is one of the most impressive works of television animation I’ve seen in quite some time, purely on a technical level, and I think the weight and character that the animators have given to Fujimoto’s world helps bridge the gap between the different approaches in style and medium.

In other words, the show whips ass when it needs to whip ass, it’s funny as hell when it needs to be funny as hell, and Chainsaw Man‘s chainsaws do indeed go “Brrrrrrrrrrrrr-vrooooom!!!!” when they dig into the demonic meat of Denji’s many enemies. It is an anime that asks, “Wouldst thou like to live deliciously?”, and before we even have the chance to think things over, it is shoving so many violent delights into our eyes and ears that we cannot help but scream back, “You’re goddamn right!”

Like I said, though, the secret to Chainsaw Man‘s success lies not in its spectacle, but in its surprisingly earnest heart—or, at the very least, in the proverbial goodest-boy chainsaw-pup that now resides in the hollowed-out cavity where the show’s metaphorical organs used to be. It’s not about the legions of hellspawn that Denji has mulched into paste, but in the simple and honest needs that motivate him as he rips and tears through all of those big and gorgeously drawn guts. He was once a boy that was dealt such a bad hand in life that a slow death by malnutrition and mob exploitation was the good option for him. He dreamt of nothing more than having a little bit of jam to sweeten up the plain white bread that he and Pochita subsisted on in-between demon hunts. The thought of a girl being capable of braving the stink of him long enough to allow Denji to cop a consensual feel wasn’t so much a fantasy as it was a delusion.

Now, though? Denji may be just as exploited by Makima and the Public Safety Devil Hunters as he was by the mob, but this time the person exploiting him is a pretty lady who might even someday let Denji touch her boobies, and he gets four hots and a cot to revel in while he lets his onetime delusions of human intimacy settle into their new role as “Ludicrously Unrealistic But Still Technically Possible Sex Fantasies”. He can make the toast of his and Pochita’s dreams, and there ain’t a scowling Public Safety babysitter alive who is going to stop him.

It’s the kind of brazenly hedonistic but shockingly innocent perspective that betrays Tatsuki Fujimoto‘s freakshow-massacre comic-book approach as merely a cover for a story that is, when you get right down to it, achingly human. When you strip away the layers of ultraviolence and (very funny) jokes about Denji kicking Aki Hayakawa right in the ol’ beanbag over and over, what we have is a classic story about a deeply lonely and neglected boy whose best friend in the whole world is his loyal canine companion, and who wants nothing more than to scrounge together whatever meager dignities and scraps of genuine human connection that he can find in a world that is actively hostile to anyone that dares to care too much about anything, for any reason.

Except, in this particular version of the story, Denji spends less time learning meaningful life lessons about nature and the power of friendship and more time, y’know, falling asleep on the crapper, barking like a dog for his boss-mommy, and stealing spank-bank deposits from a recently beheaded Fiend. Truly, this is a tale that has been adapted to fit the real and relatable struggles of the modern youth.

Really, the only quibbles that have gotten stuck in my craw are minor, so far. I do miss some of the abject insanity that Fujimoto was able to deliver with his expert use of black-and-white contrast and masterful panel layouts, and the generally muted color palette of MAPPA‘s work sometimes undercuts the bonkers imagery on display (that final shot of Power reveling in the remains of the Sea Cucumber Devil probably ought to have been a touch more neon, for example). Also, I won’t blame newcomers to the franchise for maybe being ever so slightly underwhelmed by these first two episodes, if only because they only hint at the no-holds-barred ridiculousness that is to come once the story hits its stride. Still, I can’t imagine anyone but the grumpiest of naysayers is going to walk away from Chainsaw Man without that chainsaw engine revving its hype all up and down their cerebral cortexes.

Welcome to Chainsaw Man, everyone. Keep your gas tanks full and your blades nice and greasy, because it’s going to be a hell of a ride.

• Power’s Playlist: We’re apparently getting new EDs with every single episode, and I would be remiss if I didn’t give this fun aspect of the show its own spotlight. Episode 1 closes out with “Chainsaw Blood” by Vaundy, and Episode 2’s ED comes courtesy of ZUTOMAYO with the song “Zanki”. Both are pretty good, and very different from each other, though if I’m being honest, I think I prefer “Zanki” over “Chainsaw Blood”, even though I’d usually be inclined to groove to the chainsaw-thumpin’ rock track over the power-pop. It probably helps that the Ep. 2 ED has some lovely animation to go with it.

• I’m sure I’ll be highlighting their performances more specifically in the coming weeks, but shout-out to the whole cast of voice actors for how well they are embodying such, er, colorful characters. The standout of these opening episodes, though, might have to be Shiori Izawa, who completely kills it in her limited time as Pochita. And yes, the fact that Pochita and Made in Abyss‘ Nanachi share the same voice is absolutely affecting this completely biased observation.

• Full disclosure: This is one of the few times that I’ve reviewed a show that I am completely caught up with in manga form. I will be avoiding spoilers in the main text of my reviews, but if I catch any major differences between the anime and its source material, I’ll try and address it down here in…

•The Cutting Room Floor (Manga Spoilers Incoming!) Outside of a couple of nixed lines here and there, Episodes 1 and 2 of Chainsaw Man are remarkably faithful to the first six-ish chapters of the manga. The only major alteration I found was the complete omission of the Muscle Devil fight from Ch. 2 or 3. While it’s a shame that we only got one real occasion to celebrate the wrath of His Holiness the Sawman, I think the pacing of Episode 2 benefits from the cut. The focus remains on fleshing out Denji and Makima’s whole pet-master dynamic, and it keeps the vibes appropriately low-key.


James is a writer with many thoughts and feelings about anime and other pop-culture, which can also be found on Twitter, his blog, and his podcast.