ANN is giving away two pairs of General Admission tickets to see BAND-MAID in concert on October 30th. These tickets include access to rides & attractions at the mall/theme park! 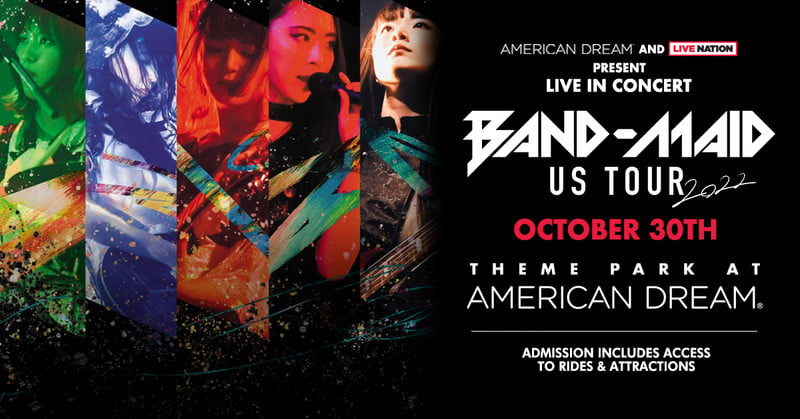 BAND-MAID is an impossibly hard rocking, 5 piece, all-female rock band formed in 2013. Don’t let their aesthetics fool you, these five “maids” are highly skilled musicians and songwriters, and their hard-hitting sound, shredding guitars, pounding drums and catchy hooks have been praised by fans and media around the world.

A burgeoning fan base both domestic and international has seen BAND-MAID sell out multiple dates in the US, UK and Europe, and scores of YouTube reaction videos from fans around the world blown away by the group’s level of virtuosity and musical chops. BAND-MAID has over 150 million views on YouTube, and over 40 million on TikTok reaction videos!

2020 saw the release of the full album “Unseen World, in 2021 the group contributed the theme songs for the popular anime series Platinum End and Log Horizon: Destruction of the Round Table and also made their Hollywood debut with a cameo appearance in the Netflix film “Kate”. In 2022 the group continues to make great strides on a global scale toward its goal of world domination.

Don’t want to take your chance on the give-away? Get your tickets NOW via Ticketmaster. If you win, you can always bring some friends with you!

The Fine Print: Although unlikely to happen, Anime News Network reserves the right to cancel this contest at any time. Contest is open to any and all residents of the planet Earth and neighbour parallel dimensions, but prizes will only be shipped within the continental United States and Canada (elsewhere, you have to arrange to have it sent to someone living in the appropriate area, and they can send it to you.) Winners’ names and city/state/province will be posted on AnimeNewsNetwork.com, their mailing addresses will be provided to our sponsor and/or shipping agent of choice (ex: USPS), and no one else. Winners’ addresses and e-mail addresses will be erased once the prizes have been shipped. Non-winners’ names, e-mail and mailing addresses will not be given out to any one and will be erased when the winners have been confirmed. Non-winners will not be contacted, spammed or harassed in any way. We reserve the right to retroactively add new rules when and how we see fit.
Post Views: 29
Anime