Generally, in mainstream anime, we enjoy battle-related ones that are full of action. It becomes more epic when the protagonist uses a weapon, whether it can be a sword, bow & arrow, gun or spiritually manifested stuff. We have often seen many characters using a sword as their primary weapon, and the usage of guns is much less. So, today in this article, we will discuss the list of “15 Awesome Anime Characters with Guns”.

We have seen that battle-related anime engage a lot of madness. In the 80s, Dragon Ball and Fist of North Star were very popular; the characters fought out using fists. Later we saw Rurouni Kenshin, Bleach, Gintama and Demon Slayer, where characters use their sword to settle things with their foes.

There were only a few enemies for whom the main hero uses guns; the most notable ones were City Hunter and Cowboy Bebop. From every Generation, we have seen that particular trend regarding protagonists’ forms of weapons. This list is not rank-based; it’s just a normal one. So, let’s deep dive into the list of “Anime Characters with Guns.” 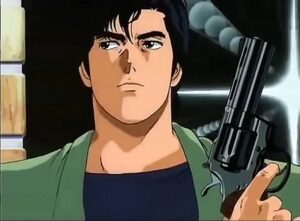 Let’s begin the list with the hottest “anime guy with gun,” Ryo Saeba. He is the hero of the City Hunter series. He seems farfetched, lazy, and dumb most of the time, but when needed, he becomes firm and sharp, ready to take down any enemy regardless of the threat his enemy carries. Ryo uses Colt Python .357 Magnum with metal jacket bullets.

Ryo is trained almost to the point where he is mentally and physically strong. He’s got amazing strength and extremely rapid reflexes in brawls against his opponents.

Ryo is very sharp, as he can anticipate his opponent’s next moves, so it becomes unable for his foe to outdo him. He never misses his mark, as he is a highly trained shooter. 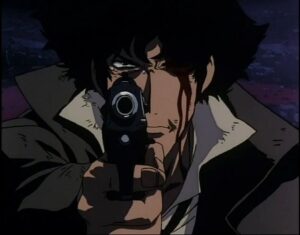 Another hottest anime guy with gun is Spike Spiegel. He is the hero of the Cowboy Bebop series, where he is a bounty hunter. He has many skills and capabilities, including a clear vision, abnormally sharp perception, and amazing luck.

Spike generally uses Jericho 941 or Ruger P85 and is an expert in a fistfight, as he used to work at a syndicate. 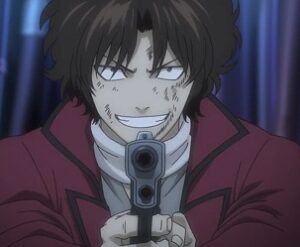 Sakamoto Tasuma is one of the supporting characters in Gintama. He fought alongside Gintoki in Joi War, where the hand that he used to hold the sword was badly injured.

Sakamoto was motivated by Gintoki to move forward with his dreams instead of fighting the war. After leaving the war, he becomes a tradesman and the leader of the trading fleet Kaientai. Sakamoto used a gun as his primary weapon after he left the war, probably because of his injury. 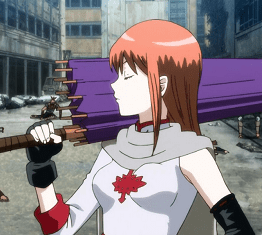 Kagura is the main character of the Gintama series. She is the only member of Yorazuya who is female and belongs to a different race, i.e., Yato. Yato is a tribe who are expert in combat.

Kagura is very powerful in strength as she manages to knock out very powerful opponents with her brute strength. Apart from strength, she is an expert in shooting. She is the only character in the list who have a unique gun, i.e., an umbrella.

In many situations, her umbrella came in handy to fight off her opponents. Generally, Yato carries an umbrella to protect herself from the sun, but Kagura uses her umbrella as a weapon too. Kagura is the strongest female character in the series. 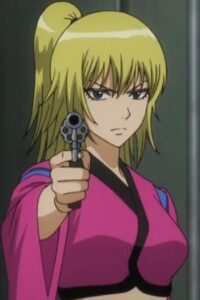 Kijima Matako is the hottest anime girl with gun. She is one of the supporting characters in the Gintama series. She made her appearance during the Bennizakura arc as a member of Kithetai, the antagonistic force in the series.

Matako is exceptionally skilled at using guns, and her expertise in utilizing a revolver is another which made Takasugi Shinsuke take an interest in her.

She can easily zero in on any target she wants as her bullets are mostly in the case, with the exception of Kagura, who caught the bullets. According to Takasugi, she played a key role in the formation of Kihetai. 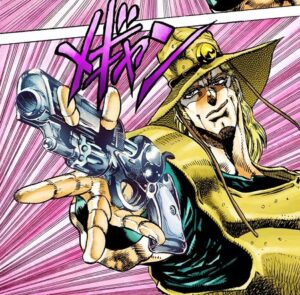 In the list of anime characters with gun, we have listed Hol Horse from Jojo’s Bizarre Adventure. He is the fan-favorite antagonist of the series. He became generally famous for his silly antics during the series.

Hol Horse was the minor villain in Part 3: Stardust Crusaders. His stand is emperor, i.e., nothing but a handgun on which he can maintain control of bullets up to a certain degree as he can lead them on his opponents.

Araki sensei, after the end of Part 8, announced a spin-off series following Josuke and Hol Horse. 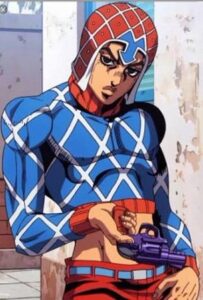 Mista is one of the main characters of the Jojo series, where he played a major role in Part 5: Golden Wind. He was part of Bucciarati’s team, who followed him to protect Trish and later take down Diavolo.

He is a gunslinger who stands name is S*x Pistols who uses this to shoot down his enemies. Mista is a talented shooter even before gaining his stand. His astonishing accuracy in using a gun and added by his ability to keep composed amid the shooting, make him a deadly assassin. 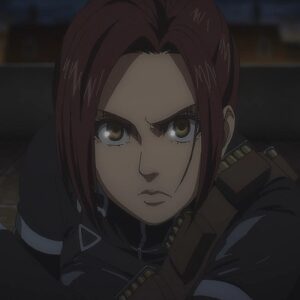 Sasha Braus is a member of the Survey Corps and belonged to the batch 104th cadet corps, where she ranked 9th. She is a great food lover, and at the start of the series, she is punished by Keith Shadis for eating potatoes in the midst of the cadets’ introduction.

Sasha is an expert marksman and is very proficient at handling guns. During Marley’s arc, he shooting skills increased to a certain where she managed to shoot all Marley soldiers within a few seconds without wasting any bullets. 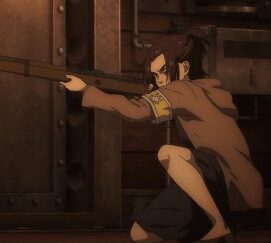 Gabi Braun is an Eldian who belongs to the Marley continent, where she lives in libero. She is the cousin of Reiner and one of the top warrior cadets who was next in line to inherit Armored Titan.

She is very expert at shooting despite her age, as she manages to shoot down Sasha at close range and even manages to sever Eren’s head using anti titan rifle from a certain distance. Even during the battle of heaven and earth, she played a key role that led to the rescue of Armin. 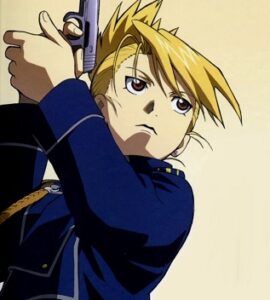 Rize Hawkeye is one of the supporting characters in the Fullmetal Alchemist series, where she belongs to Ray Mustang’s faction. She is a shooting expert and can handle any type of gun, whether it is a pistol, sniper, or shot shotgun.

She also has ability dual-wielding skills and absolute accuracy. She is an irreplaceable person to Ray Mustang, whether in office or battlefield, as she supports him mentally and is one of the closest aides to him.

Asada Shino, also goes by her gaming name Sinon is one of the major characters in the Sword Art Online series. She was the second lead during the Phantom Bullet arc.

She is a gifted shooter, as we have seen her skills in Gun Gale Online, where she was able to snipe targets from a long distance. Before her enemies even know about her presence, she finishes off her enemies in one shot, not even giving them a chance to counter.

As a result of her extensive knowledge of weapons through GGO, she can fire any target with any type of gun. 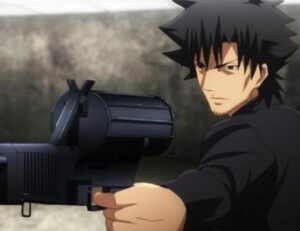 Kiritsugu Emiya is the anti-hero and main lead of Fate Zero. He participated and won the fourth holy grail war at the cost of his loved ones. He was the first master of Saber.

He can use any kind of gun efficiently and with uncanny precision. Kiritsugu is very adept with sharpshooters, giving him the ability to snipe and shoot as he plans to shoot Lancer.

He is also proficient in handling guns such as Calico M950 or Thompson contenders. Kiritsugu’s rivalry with Kotomine Kirei was immensely enjoyed by the fans. 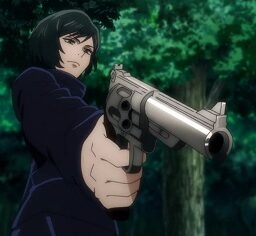 Mai is a supporting character in the Jujutsu Kaisen series, where she is studying at Kyoto Jujutsu High. She is the twin sister of Maki. Mai is an amazing long-distance shooter who usually never misses her mark.

During the close-range combats, she enhances her shooting skills by adding curse energy to them. During the Kyoto Goodwill Event arc, to save Momo, she easily took down Nobara from a long distance. 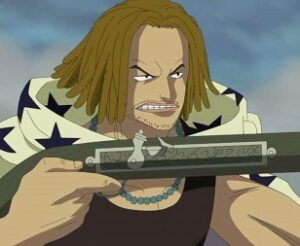 The most popular anime character with gun is Yasopp from One Piece. He is the sniper of Red-Haired Pirates, who also goes by the name Chaser. He is a magnificent marksman who never misses his prey.

It was said that his shooting skills are to a certain level where he managed to shoot off an ant’s antennae without harming it from 100 feet away from it.

Yasopp is an excellent user of Observation Haki, as shown in the movie Red where he was able to coordinate with Usopp in taking down Tot Musica. 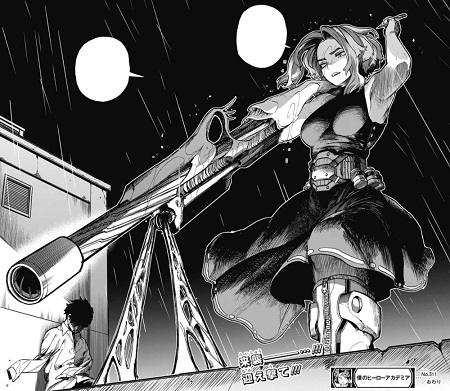 The strongest anime girl with gun is Kaina Tasumi from My Hero Academia. She is also known as Lady Nagant and was the primary antagonist during the Tartarus escapee arc, where she faces Deku.

She used to be a pro hero, but because of her actions, she has deemed a villain and was put into Tartarus prison. She has excellent snipping skills, and it made Deku go all out to defeat her.

That’s all for today’s post on “anime characters with gun.” We will soon be back with another article on anime. Till then, stay tuned and stay updated. See you again.