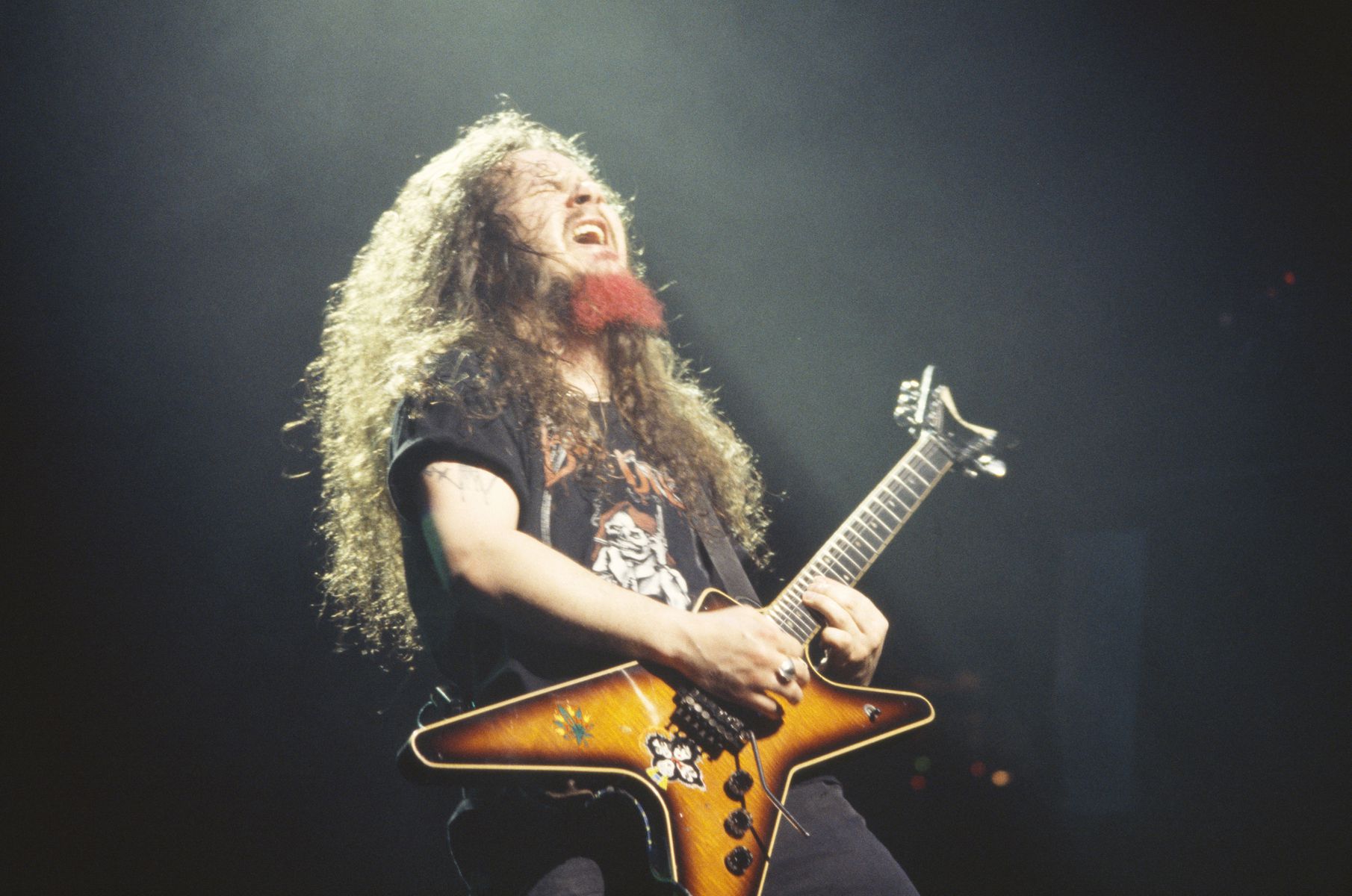 The South shaped ‘90s music even more than Seattle did. Sure, Seattle is the geographic location most closely associated with that decade’s sound. This is due to the successful grunge bands, like Soundgarden, Pearl Jam and Alice in Chains, which sprung from there.

But The South – yeah, it’s a region and not just a city – launched musicians that impacted pop, metal, rock and country in a huge way. Here’s a look at 10 artists from The South that scored blockbuster albums in the ‘90s and created music essential to defining that era beyond grunge.

“Vulgar Display of Power” Pantera (1992): One of the decade’s most influential heavy-metal releases. With ‘80s flash persona non grata by ‘92, Pantera, who had a glam vibe in their early days, brought a more cathartic sound to heavy rock. On fifth album “Vulgar Display of Power” that howl garnered double-platinum sales. The Arlington, Texas band’s songs “Mouth of War” and “Walk” took Metallica’s razor thrash and turned the intensity up to 11. Thanks to the Abbott brothers – guitar hero Dimebag Darrell and drummer Vinnie Paul – Pantera’s metal grooves always had Southern swagger. R.I.P.

“…Baby One More Time” Britney Spears (1999): Commercially, teen-pop ruled the late ‘90s and early 2000s. “…Baby One More Time” launched the music career of the greatest teen-pop star of them all, Britney Spears. The Kentwood, Louisiana-raised singer/dancer’s debut album has sold more than 14 million copies in the U.S. Sales were driven by Spears’ youthful charisma, a chart-topping Max Martin-penned title-track and its era-defining music video, directed by Nigel Dick, who the previous decade helmed Guns N’ Roses videos like “Welcome to the Jungle.”

“Wide Open Spaces” Dixie Chicks (1998): Few country groups in recent decades combined classic chops and contemporary sensibility like Dallas’ Dixie Chicks. (Rebranded in 2020 as simply The Chicks.) “Wide Open Spaces” turned Dixie Chicks into megastars. The group’s third album achieved the rare-air of diamond sales status, 10 million or more, on the way to moving 13 million units. “Wide Open Spaces” birthed three chart-topping country singles: the evocative title track, nostalgic ballad “You Were Mine,” and “There’s Your Trouble.” The latter and the album itself won Grammys. The rest of Nashville was then trying to catch-up with these Chicks. The group’s next album sold like crazy too. It took a controversy involving feisty singer Natalie Maines’ political opinions to slow The Chicks down.

“Antichrist Superstar” Marilyn Manson (1996): In the grand tradition of those “Florida man” news-of-the-weid headlines, I give you the most Florida man of all Florida men: Brian Warner, aka Marilyn Manson, the controversial, namesake frontman of Ft. Lauderdale band Marilyn Manson. The band’s 1995 EP was produced by Nine Inch Nails mastermind Trent Reznor, with the preachers-and-parents-perturbing title “Smells Like Children.” Marilyn Manson’s debut album, “Antichrist Superstar” upped the ante and the anti. Mid ‘90s middleclass white kids needed something new to brood and headbang to. Manson’s industrial heavy-metal sound, on tracks like the MTV hit “Beautiful People,” gave it to ‘em.

“Shake Your Money Maker” Black Crowes (1990): Pre-grunge and post-GN’R, The Black Crowes helped return rock to bluesy boogie. Instead of trying to be Van Halen, Aerosmith and Led Zeppelin like many late ‘80s bands did, this Atlanta quintet cosplayed Rolling Stones, Faces and Humble Pie. The Crowes’ scrappy debut album “Shake Your Money Maker” was named for an old Elmore James song. “SYMM” singles like “Jealous Again” and “Twice As Hard” rocked enough to appeal to Motley Crue fans but with lyrics poetic enough for (some) R.EM. enthusiasts. The ballad (not a power-ballad, mind you) “She Talks To Angels” crossed-over to pop audiences. But it was The Crowes’ “Walk This Way”-ified cover of Otis Redding classic “Hard to Handle” that really set things on fire. “Money Maker” lived up to its name, going quintuple platinum in the U.S.

“Baduizm” Erykah Badu (1997): Where would Black ‘90s music be without the neo-soul movement? Dallas native Erykah Badu was the high priestess of that sound, which wove together classic soul music and hip-hop aesthetics. (Other prominent practitioners included D’Angelo and Lauryn Hill. Badu’s earth-mama vibe and sultry vocals made her debut single “On & On” a sensation. Her debut album “Baduizm” went triple platinum. Badu’s deep-groove also resonated on tracks like “Appletree” and “Other Side Of The Game.” Both “Baduizm” and “On & On” won Grammys. We should all aspire to be more like Badu.

“Out Of Time” R.E.M. (1991): In the electric guitar dominated early ‘90s, R.E.M. somehow managed to get a mandolin all over MTV and radio. “Losing My Religion,” nicking its hook from a Southern expression for being exasperated, was a perfect song. So much so the song and its artsy video eventually became impossible to escape. Back when R.E.M. formed in 1980s Athens, Georgia, their jangly punk music was called college-rock. A decade later, that branding pivoted to alternative-rock, which included grunge bands like Nirvana but also poppy groups like No Doubt. Art-metal weirdos Jane’s Addiction’s Lollapalooza traveling festival made alternative explode. But R.E.M. lit the fuse.

“Crash” Dave Matthews Band (1996): Hate if you must. But Charlottesville, Virginia’s Dave Matthews Band distilled ‘90s jam-band grooves into songs good enough to appeal to people who took showers. For some, DMB hits like “So Much To Say” and “Tripping Billies” evoke memories of chicken-dancing college days. Singer/strummer Dave Matthews’ quirky vocals are a black-licorice-level acquired taste. Still, there’s no denying the musicality of Matthews’ supporting cast, especially drummer Cater Beauford. And it was LeRoi Moore’s sax and Boyd Tinsley’s violin that further distinguished DMB from guitar-hippie contemporaries like Phish and Widespread Panic.

“Cracked Rear View” Hootie & the Blowfish (1996): Twenty-one-million and counting. That’s how many copies Hootie & the Blowfish’s debut album has sold. That puts “Cracked Rear View” in the same double-diamond zip-code as juggernauts like AC/DC’s “Black In Black.” Powered by basic-but-heartfelt songwriting and singer Darius Rucker’s resonant vocals, Hootie songs like “Hold My Hand” and “Only Wanna Be With You” brought the frat-house to your house. This affable quartet didn’t shoot black-tar like rockstars, they shot par on the golf course. All of which basically made Hootie the ‘90s equivalent of Huey Lewis and the News.

Inside the mind of guitarist who supercharged David Lee Roth, Whitesnake