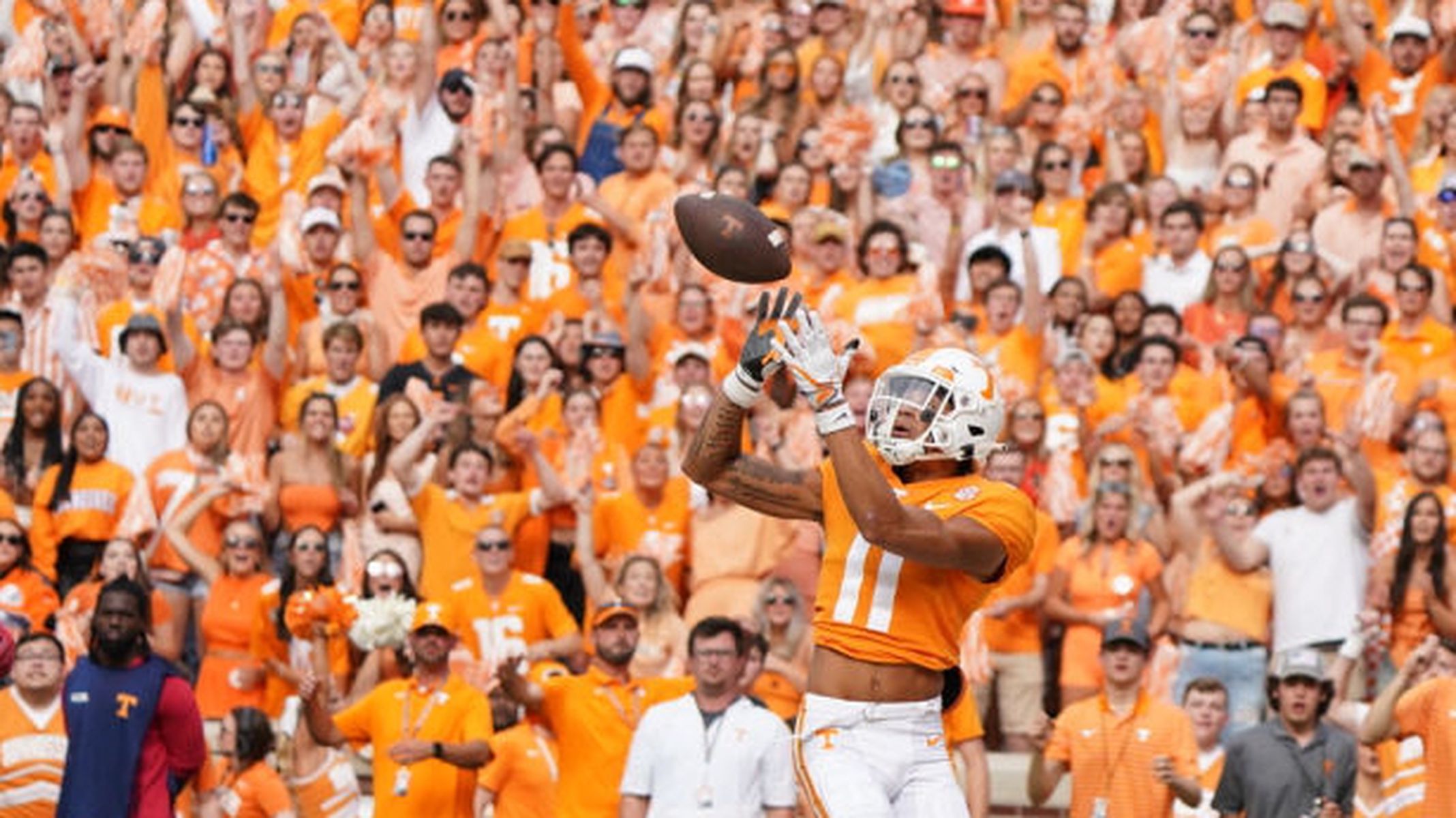 5 TD receptions for Tennessee WR Jalin Hyatt in a 52-49 victory over Alabama on Saturday to tie the SEC single-game record. Hyatt followed LSU’s Carlos Carson against Rice in 1977, Vanderbilt’s Earl Bennett against Kentucky in 2005, South Carolina’s Sidney Rice against Florida Atlantic in 2006 and Alabama’s DeVonta Smith against Ole Miss in 2019 as SEC players with five TD receptions in one game. Hyatt equaled the Tennessee record for TDs in a game set by Gene McEver in a 54-0 victory over South Carolina on Dec. 7, 1929. Before Saturday, only one opposing player had caught as many as three TD passes in one game against Alabama in this century – Texas A&M’s Malcome Kennedy in a 49-42 loss to the Crimson Tide on Sept. 14, 2013. Tennessee QB Hendon Hooker threw the five TD passes to Hyatt to become the third player with at least that many in a game against Alabama. Johnny Manziel had five TD passes in Texas A&M’s 2013 loss. Danny Wuerrfel threw six TD passes in Florida’s 45-30 victory over the Tide in the SEC Championship Game on Dec. 7, 1996.

5 Interceptions have been returned for TDs by Mississippi State CB Emmanuel Forbes, who scored on a 59-yard interception return with 8:33 left in the Bulldogs’ 27-17 loss to Kentucky on Saturday. Forbes tied the SEC record for career interception-return TDs set by Tennessee LB Jackie Walker from 1969 through 1971. Forbes had three interception-return TDs as a freshman in 2020 and another against Texas A&M on Oct. 1. Forbes has intercepted four passes in the past three games.

11 Consecutive victories for Alabama when the Crimson Tide incurred at least 100 penalty yards, a streak that ended on Saturday. Alabama had a school-record 17 penalties for 130 yards in its 52-49 loss to Tennessee on Saturday. The Tide had 11 penalties for 113 yards in a 40-38 loss to Central Florida on Oct. 28, 2001. Between those games, Alabama won the 11 contests in which it had at least 100 penalty yards.

112 Years since the previous time that Arkansas had scored at least 50 points against a non-conference opponent on the road. On Saturday, the Razorbacks defeated BYU 52-35 in Provo, Utah. On Nov. 5, 1910, Arkansas won 50-0 at Washington College in Missouri. Saturday’s game was Arkansas’ 62nd with at least 50 points since the win at Washington, but the 61 games in between came in home games, conference games or neutral-site games. The victory, fueled by five TD passes by QB KJ Jefferson, made Sam Pittman the first Arkansas coach to win the first eight non-conference games of his tenure with the Razorbacks.

448 Rushing yards for Ole Miss in its 48-34 victory over Auburn on Saturday. The Rebels posted their highest rushing total in a conference game since running for 515 yards in a 39-14 victory over Auburn on Nov. 10, 1951, in Mobile. That’s the highest rushing total ever given up in one game by the Tigers and the most rushing yards in one game for Ole Miss. For the first time since 1975, Ole Miss had three players with at least 100 rushing yards in the same game. Against Auburn, RB Quinshon Judkins ran for 139 yards and two TDs on 25 carries, RB Zach Evans ran for 136 yards and one TD on 21 carries and QB Jaxson Dart ran for 115 yards on 14 carries. In a 23-6 victory over Tennessee on Nov. 15, 1975, in Memphis, Paul Hofer, James Reed and Michael Sweet ran for at least 100 yards apiece for the Rebels. Auburn ran for 301 yards in Saturday’s game. Auburn had won 15 in a row when rushing for at least 300 yards since Nov. 8, 2014, when the Tigers lost to Texas A&M 41-38 while running for 363 yards. Auburn has a 43-2 record in this century when gaining at least 300 yards on the ground. Ole Miss has won four of the past five games in which its opponent has run for at least 300 yards.