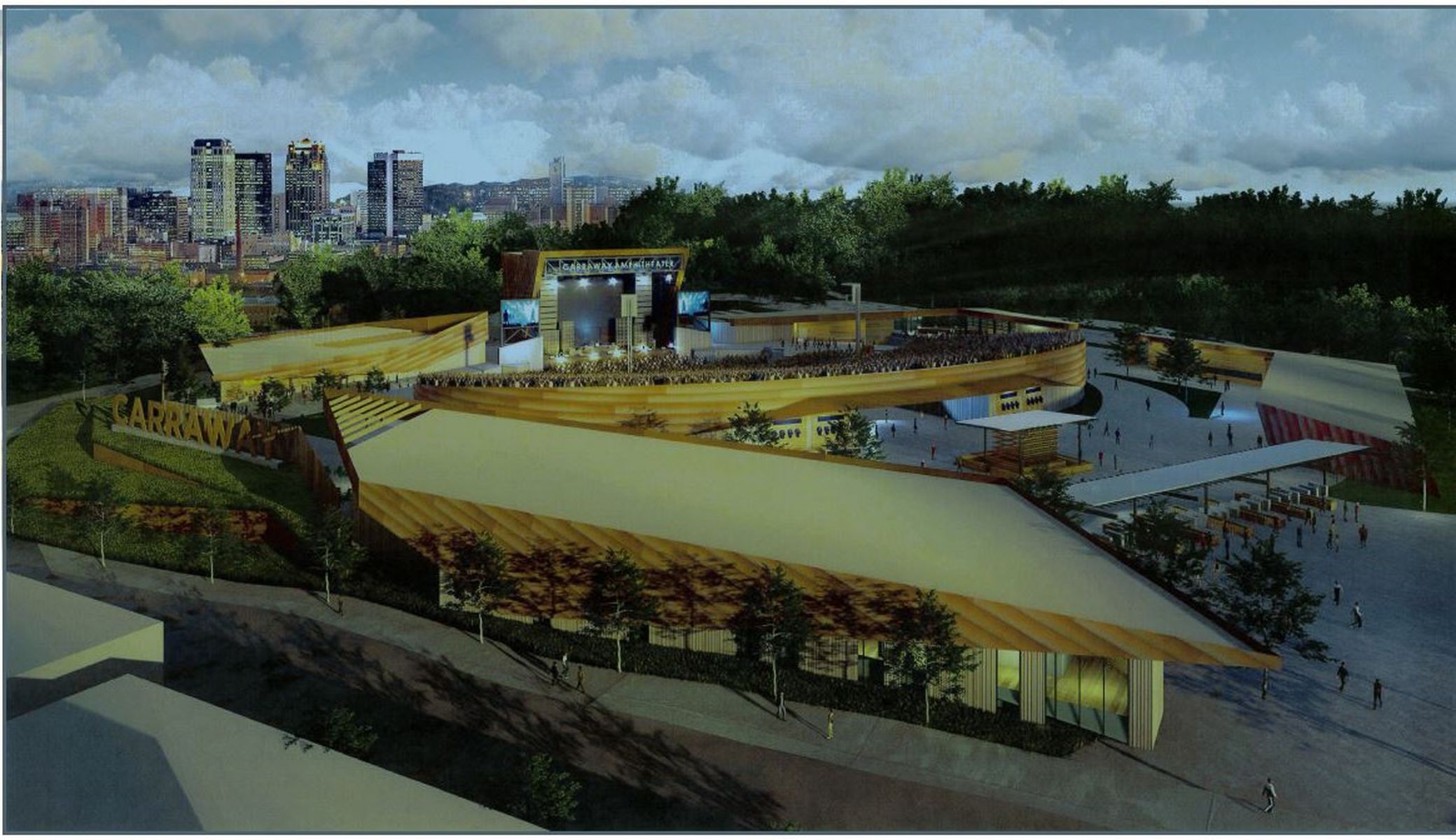 The proposed $50 million, 9,000-seat amphitheater that would anchor The Star at Uptown, the $300-million mixed-use development on the former Carraway Hospital campus in North Birmingham, would replace Oak Mountain Amphitheater in Pelham, according to officials.

The Carraway project is called “the only tier 1 amphitheater in central Alabama,” according to a document outlining the economic “opportunity” of the new venue that was presented to members of the Jefferson County Commission at a work session on Tuesday.

The company would manage the new amphitheater, which would sit just a few blocks from Protective Stadium and be owned by the Birmingham Jefferson County Convention Complex (BJCC).

In addition, the document stated: “A restrictive covenant would be placed on any sale of [Oak Mountain] to ensure it would not serve as an amphitheater in the future.”

“This an opportunity for generational change,” said Commission President Stephens. “We can become an A-plus concert site rather than a C-plus.”

On Tuesday evening, the City of Pelham issued this statement:

“The proposal put forth by the Jefferson County Commission President came as a surprise to Pelham city leaders. After a number of conversations, it is clear to us that what was discussed in the pre-commission meeting remains just that: a proposal.

“The City of Pelham and Oak Mountain Amphitheatre (OMA) have been partners for more than three decades, and our commitment to the venue’s success remains steadfast. In fact, the City Council just last night (10/17/2022) approved a new project to make improvements to Amphitheater Road, which will improve access to OMA, the Pelham Civic Complex & Ice Arena, and The Canopy, a $60 million mixed-use development under construction directly across from the Amphitheatre. It’s also important to note, Live Nation recently invested a significant amount of money for improvements to Oak Mountain Amphitheatre.

“In the most recent meeting between city leaders and Live Nation, the company emphasized its commitment to its operations in Pelham.”

To fund the construction and debt payments, Stephens said the JCC, the city of Birmingham, the BJCC, and Live Nation would each make a one-time $5 million contribution as a paydown to reduce borrowing. The BJCC would borrow $30 million over 30 years to fund the remaining construction costs.

“That is a requisite,” Stephens said.

The project hinges on the ability of the BJCC and the Greater Birmingham Convention & Visitors Bureau to come to an agreement that the CVB would relinquish lodging tax payments provided to it by the BJCC under an earmark agreement conceived after state lawmakers passed legislation in 2003 allowing the BJCC to capture payment in lieu of tax (PILOT) from the Sheraton to fund capital investments that support entertainment tourism.

The earmark represents one percent of taxes now received from the Sheraton and Westin, an estimated $1,142,000, according to the document. That amount would only partially fund the projected $2 million annual debt service; the remaining amount would be covered by amphitheater revenues, based on Live Nation’s estimates.

“What the BJCC is attempting to do is to reclaim those PILOTS from the Sheraton Hotel and the Westin hotel and utilize those funds to fund the shortfall in debt service payments for the amphitheater,” Stephens said.

Jefferson County Commissioner Sheila Tyson has enjoyed outdoor concerts at both the Tuscaloosa Amphitheater and Huntsville’s spankin’ new Orion Amphitheater, which opened in May

“I like Tuscaloosa and Huntsville, too,” she says. “This one is nicer than both of them.”

“I think it’s a great idea,” Tyson said, then referencing the Garth Brooks concert in June, which jammed more than 45,000 fans into Protective Stadium. “I think that people will come to Birmingham because we are in a central location for concerts. A lot of the BJCC concerts have sold out. So, I don’t think it’s a bad idea. The information we got today was not enough, though.”

In a September letter signed by Stephens and Birmingham Mayor Randall Woodfin, and obtained by AL.com, the two men “urge” CVB President/CEO John Oros to “support a proposal to redirect a certain portion of lodging tax funds to help finance this important project.

“As city and county leaders,” they wrote, “we strongly support this project and are committed to investments that significantly enhance our tourism/entertainment economy. In addition to your support, we fully expect the city, county, BJCC, and private companies to make significant investments to make this project a reality for our area.”

“They’re the number one promoter of shows in the United States, which would put us in direct competition with Huntsville, where the city’s trying to manage the amphitheater. So, I think there’s a huge opportunity to take revenue that is already there; to build Protective, an additional tax on rental vehicles in Jefferson County was enacted. There is no additional taxation. It’s a redistribution of funds.”

Stephens said the state would provide the CVB with $3 million “to help alleviate some of the initial shortfall that they would indeed have” until the 120-room hotel planned for the Carraway site is operational. According to projections provided to the commissioners, the hotel could produce “an additional $240,000-$270,000 per year in lodging tax revenues to the VB based on an average 70% occupancy and $189.00 [average daily rate].

The CVB Board of Directors met on Monday to discuss the BJCC’s lodging tax request. When contacted by AL.com on Tuesday, Oros said the proposal was “still too early to discuss”. The board meets again Monday.

An artist’s renditions show a sprawling wood-grained structure with the stage facing away from downtown, offering some fans a view of the city skyline.

“I want to see this city, county, BJCC and all government entities continue to work together—like they did to build Protective Stadium and renovate Legacy Arena—to move the region forward,” Williams added. “This is another example of how to do that without any taxation, and it’s something the CVB has the opportunity to support, which furthers its mission of promoting economic development and tourism for the region.”

“We just need to sit down and actually see exactly what they’re trying to do,” Tyson said. “We just really need to see the plan that they have. I’m not against it. I’m definitely not going to say I’m against it. It’s the only way you’re going to attract people to the city. You have to have something for them to come to.”

Yet before a single ticket is sold, the CVB must acquiesce to the BJCC’s request. “If CVB votes this down,” Stephens said, “you can put [the amphitheater] in the trash can.”