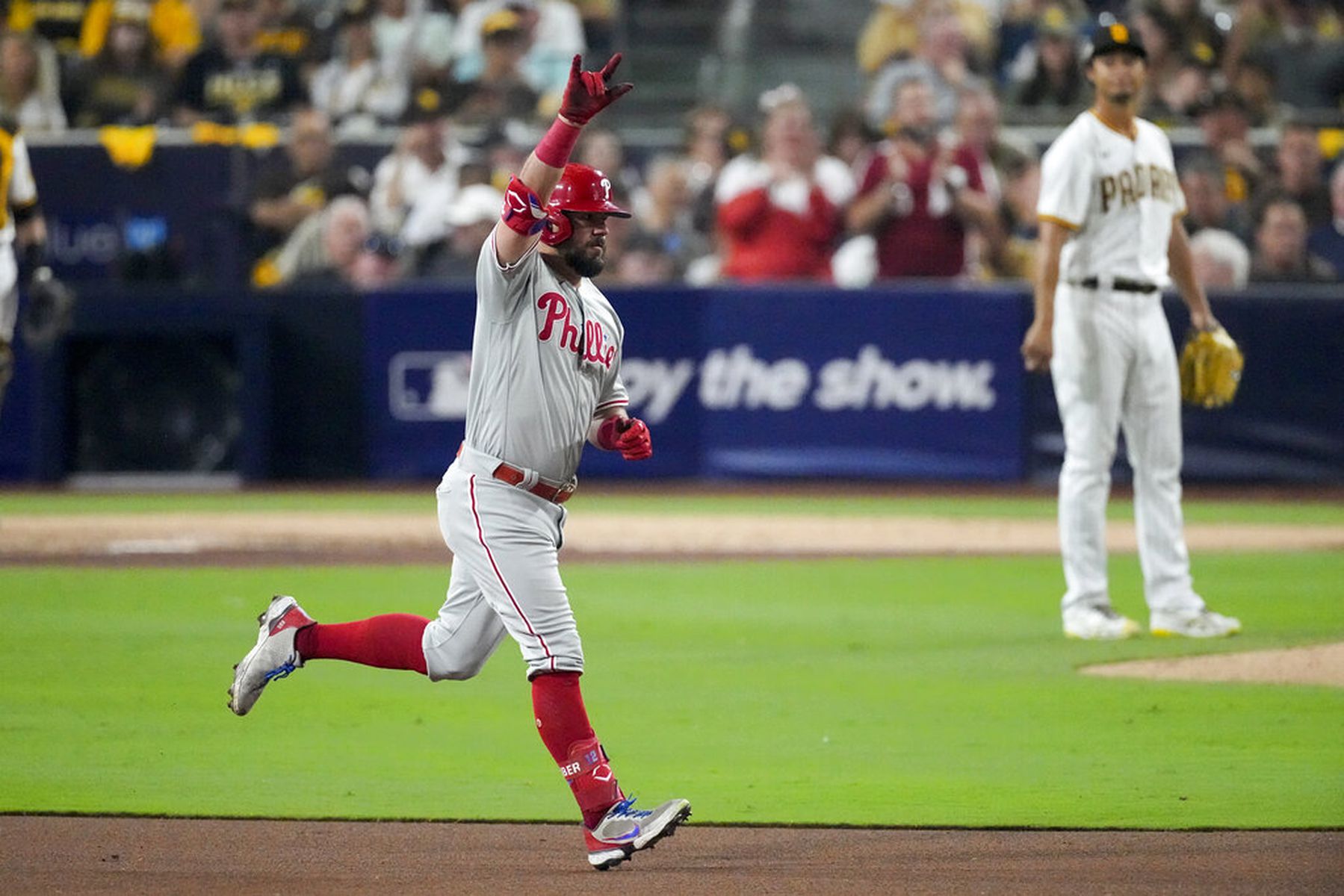 The San Diego Padres host the Philadelphia Phillies in Game 2 of the MLB 2022 National League Championship Series Wednesday, October 19, at Petco Park in San Diego. The game will be live streamed on fuboTV.

Left-hander Blake Snell gets the start on the mound in Game 2 for the Padres, vs. right-hander Aaron Nola for the Phillies. Philadelphia leads the best-of-7 series 1-0 after beating San Diego 2-0 in Game 1 Tuesday.

The Padres vs. Phillies Game 2 starts at 3:35 p.m. Central (4:35 p.m. Eastern) and will be live streamed on fuboTV, which offers a 7-day free trial. Fox Sports 1 will broadcast the game nationally.

Bryce Harper hit another postseason home run — no surprise there — and then Kyle Schwarber topped him by launching a shot that amazed even his teammates.

Zack Wheeler was awesome, too, combining with two relievers on a one-hitter for Philadelphia. The Phillies managed just three hits off Yu Darvish and the San Diego bullpen — the combined four hits matched the fewest ever in a postseason game.

The Phillies will try to take a 2-0 lead when they send Aaron Nola to mound to oppose Blake Snell on Wednesday. Nola is set to pitch against his brother, Padres catcher Austin Nola.

“I thought Darvish was really good and we couldn’t get much going, but Harper, three straight games with a home run, and Schwarber’s game was just completely flush,” Philadelphia manager Rob Thomson said. “I mean, with the great pitching we had tonight, that’s all we needed.”

Harper, trying to reach his first World Series, hit a high-arcing, opposite-field shot into the first row in left field with one out in the fourth. It was the fourth home run this postseason for Harper, who was playing in San Diego for the first time since his left thumb was broken when he was hit by a pitch by Blake Snell on June 25, sidelining him for two months.

Schwarber’s incredible shot on Darvish’s first pitch of the sixth had an exit velocity of 119.7 mph — the hardest-hit ball in any postseason since Statcast began tracking in 2015 — and was the first to reach the right field upper deck at Petco Park, which opened in 2004. It was the farthest in his career and the farthest at Petco in the Statcast Era and gave the Phillies a 2-0 lead.

Schwarber, who led the NL with 46 home runs this season but was in a 1-for-20 postseason slump coming in, raised his right arm as he rounded first base and Harper stood in the dugout with his mouth agape in amazement.

“I thought it got pretty small pretty fast,” said Harper, who’s in his first NLCS. “I’ve never seen a ball go up in that section in Petco Park. Just very impressive.”

“A lot of people just looked at me weird,” Schwarber said about the reaction he got in the dugout. “It was a cool moment, but I’m happy that we got the win overall.”

Wheeler said he was in the tunnel just off the dugout, “but I heard everybody sort of take off, so I ran up the stairs and I saw it land, and that was pretty crazy,” the pitcher said. “I’ve never even seen that done in batting practice or anything.”

Austin Nola, the Padres’ catcher, said “that ball was hit as far as I’ve ever seen. It was left over the middle — it was up in the zone. He put a good swing on it.”

Darvish said it wasn’t a mistake pitch to Harper, but added, “For Schwarber that is on me, that is my mistake. I knew he was waiting on something off-speed. The ball kind of went into the middle area and he got the most of it,” he said through an interpreter.

The Padres, who eliminated the 111-win Los Angeles Dodgers in the NLDS, had only four baserunners, including a single by Wil Myers in the fifth. Still, they had a chance to win in the ninth against José Alvarado.

Jurickson Profar drew a one-out walk and Juan Soto reached when third baseman Alec Bohm made an errant throwing trying for a force. Manny Machado flied out and Alvarado struck out Josh Bell for the save, looking skyward and clapping after getting the final out.

The long balls by Harper and Schwarber were the latest impressive home runs for the Phillies, who are back in the playoffs for the first time since 2011. The last won the World Series in 2008. They’ve hit eight homers in seven games this postseason.

Harper joined Gary Matthews (1983) as the only players in franchise history to homer in three straight postseason games in the same year. Harper hit one homer in the wild-card series win at St. Louis and two in going 8 for 16 as the Phillies eliminated the defending World Series champion Atlanta Braves in the NLDS.

Rhys Hoskins had an epic bat spike on a monster homer against the Braves, and J.T. Realmuto became the first catcher in postseason history to hit an inside-the-park home run.

The Phillies at times stunned Petco Park, where a sellout crowd of 44,826 was amped up for the Padres’ first NLCS appearance since 1998.

But Wheeler had the Padres totally off balance, allowing only a one-out walk to Juan Soto in the first and then retiring 12 straight batters until Myers singled with one out in the fifth. Wheeler then retired his final eight batters. He struck out eight and walked one on 83 pitches.

Darvish took the loss, allowing two runs and three hits in seven innings while striking out seven and walking one.

The combined four hits matched matched the total for the Cardinals and Pirates in a 2013 NLDS matchup, and a game in the 2004 NLCS between the Cards and Astros. … The Padres became the first team to pitch a one-hitter in one game and have a one-hitter thrown against them in another during the same postseason. Joe Musgrove and the San Diego bullpen allowed one hit against the Mets in the wild-card round clincher. What to expect from week five ‘Weekend Ka Vaar;’ Who will Salman Khan slam and who will he praise? Latest News