The official Twitter account for the television anime of Rieko Hinata and Akihiro Yamada‘s Hikari no Ō (The Firecatcher Lord) fantasy novel series revealed a teaser promotional video for the anime on Wednesday. The video features the main characters Tōko and Kōshi and previews the story’s post-apocalyptic world. 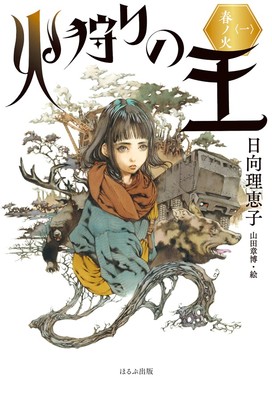 The novel series’ story is set in a world in the chaotic aftermath of humanity’s apocalyptic Last War. A great forest, infested with flameling creatures and other fallen beasts, covers the world, and pockets of humanity live in small protected communities. Due to a special weapon used in the Last War, human beings spontaneously burst into flame even when merely getting close to a small source of fire. The only safe energy source for humanity lies within the bodies of flamelings, and the duty to hunt them falls to the sickle-wielding firecatchers who brave the depths of the great forest. Among the firecatchers, they whisper tales of one who would be “Firecatcher Lord,” an individual who will be able to harvest the fire of the thousand-year comet, the “Wandering Spark” that has flown in the sky since it was sent up before the Last War, but is now returning to earth.

The story begins with Tōko, a young girl from a paper-making town who finds herself in the forbidden forest, assailed by flamelings, when a flamecatcher rushes to protect her. In another place, a young capital-born boy named Kōshi shelters his younger sister after losing his mother to factory poison.

The anime series will premiere in January 2023, and the premium subscription television channel WOWOW will play the anime.

Junji Nishimura (Ranma ½, You’re Under Arrest: The Motion Picture, True Tears, Vladlove) is directing the anime at Signal.MD (Recovery of an MMO Junkie, Napping Princess, The Wonderland), and Mamoru Oshii (Ghost in the Shell, Angel’s Egg, Jin-Roh – The Wolf Brigade, Blood: The Last Vampire, Vladlove) is overseeing and writing the scripts.

The anime’s cast include:

Hinata debuted the first book of the series in December 2018, with illustrations by The Twelve Kingdoms illustrator and RahXephon character designer Akihiro Yamada. Hinata published the fourth book in the series on September 3, 2020, followed by a side-story volume on December 21, 2021.